Chetan Bhagat (born 22 April, 1974) is a famous novel writer. Both of his previous novels were very successful. His first novel, "Five point someone", where on IIT and second novel 'One Night at Call Center' was based on a call center in Gurgaon. It is worth noting that both novels had set new records for sale and even today in many big bookstores, both of these novels remain on top of their sales. Chetan Bhagat had spent some important years of his life in Ahmedabad. He studied at the Indian Institute of Management here. Chetan Bhagat is also a scriptwriter of the Hindi film "Hello" in 2008, which is based on his novel One Night at the Call Center. Having lived in Hong Kong for almost 11 years, he decided to stay in Mumbai in 2008.

He recently said in an interview that "It is very important to reach the readers of Hindi, if I do not reach them, then I am not an Indian writer" Chetan Bhagat is considered a teenage icon. It also writes column for main English and Hindi news papers. This column focuses on national unity.

Their first novel "Five point someone - What Not to Do at IIT" (2004), is based on three students who try to emerge from the face of heavy workload of the institute. This book lasted for most days in the list of India Today bestsellers (190 weeks, January 2008). This book won the Society Young Acquisition Award in 2004 and the Publisher Recognition Award in 2005.

Famous Hindi film producer, director Rajkumar Hirani also made a film on this book, in which Aamir Khan was in the lead role.

His second book, "One Night at the Call Center", was published in October 2005 and remained a bestseller until January 2008. This book is a night story based on 6 people working in a call center. Based on this book, there has been a Hindi film "Hello" in 2007, in which actors like Salman Khan, Katrina Kaif, Sharman Joshi, Gul Panag have worked.

His next book, "The 3 Mistakes of My Life", was published in the year 2008. This book is a story of Govind Patel, a young boy from Ahmedabad, who dreams of doing business in the year 2000.

His next book 'Revolution 2020' was published in 2011. Its Hindi translation has been published in the year 2013 by Rupa Prakashan in the name of Shree Sushobhit Saktavat.

His three books, "Five Point Someone", "One Night at the Call Center" and "The Three Mistakes of My Life", have been translated into Hindi. These translated versions are also at the top of sales in Hindi books. It’s made record by selling 30000 books in the first month.

Prabhat Prakashan has published 'Five Point Someone' and 'One Night at the Call Center' and 'The 3 Mists of My Life' has been published by Diamond Pocket Books. Translated versions were published in October 2008.

"Chetan Bhagat" is at the 12th Position in this list. 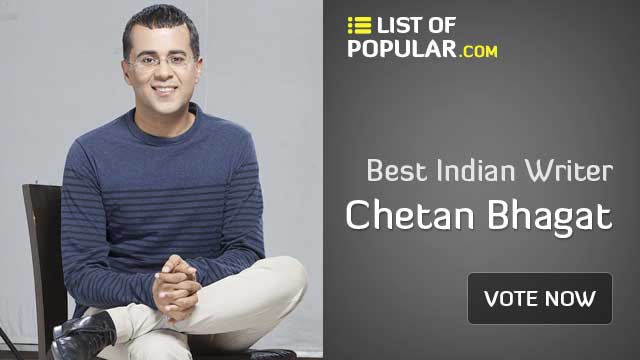