The Lord of the Rings

FacebookTwitterWhatsAppEmail
The Lord of the Rings is an epic fantasy story novel by JRR Tolkien. Published in three volumes in 1954 and 1955, each volume consisted of two books. The first volume was titled The Fellowship of the Ring, the second volume is The Two Towers and the third volume is The Return of the King. This story was written from 1937 to 1949 and became one of the most popular 20th century literary works and was translated into 38 languages. The Lord of the Rings was filmed three times, the first being an animated film by Ralph Bakshi in 1978 (as the first part of two films originally planned), the second in 1980 as a television program. The third work, the trilogy of the film The Lord of the Rings by director Peter Jackson, which was released in 2001, 2002 and 2003, won several Academy Awards and renewed public interest in this trilogy and other Tolkien's works.

The story begins when hobbyist Bilbo Baggins departs from the Shire and leaves his treasure to his heir, Frodo. Gandalf the gray witch, a friend of Bilbo, advised Frodo to be careful with the ring which became one of Bilbo's legacies. Seventeen years later passed, and Gandalf told Frodo to take the ring out of the Shire because the master of darkness Sauron was searching for the ring. Frodo, Samwise Gamgee and Peregrin Took depart and they meet Ring-wraiths on their way. After arriving at Brandyhall, they met with Meriadoc Brandybuck and the four of them begin their journey to Bree. They were almost killed by Barrow-wights if Tom Bombadil did not help them.

When they arrived at Bree, they met a mysterious person called by the name Strider which means "the wanderer". A letter from Gandalf was given to Frodo, telling him that Strider was a friend of Gandalf. In the letter, Frodo was also told to go to Rivendell. Strider offered his help to Frodo and they accepted it. The five figures finally arrived at Rivendell, but Frodo had been stabbed by a very deadly Morgul knife.

After Frodo was healed by Elrond, the ruler of Rivendell, a meeting was held. The meeting tells the history of the ring and they decide to destroy the Ring by throwing the Ring to Orodruin (or Mount Doom) in Mordor. A group consisting of Frodo, Sam, Merry, Pippin, Gandalf, Aragorn, Boromir, Legolas and Gimli was formed.

"The Lord of the Rings" is at the 2nd Position in this list. 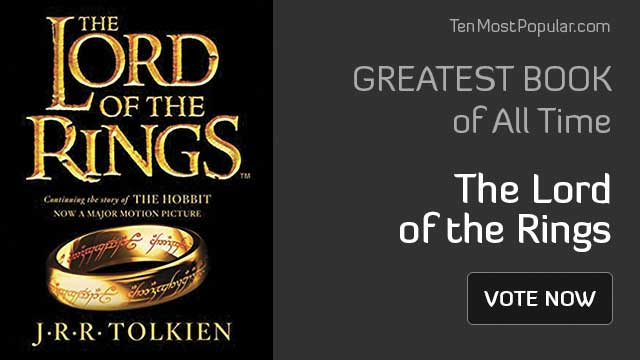