FacebookTwitterWhatsAppEmail
Le Petit Prince (The Little Prince) is a novel by Antoine de Saint-Exupéry published in 1943. This novel in French has been translated into more than 300 languages ​​and dialects, and has sold over 140 million copies to date. Saint-Exupéry himself was a pioneer in the world of commercial aviation in Europe, Africa and South America. As a pilot, he was involved as a fighter for the liberation of France in World War II, which made him a French hero.

The Little Prince's book was chosen as the Best Book of the 20th Century in France. This book was first published in the original language in Indonesia in 1950 by the publisher JB Wolters which published together in Groningen (Netherlands) and Jakarta (Indonesia). Translation in Indonesian was published by publisher Pustaka Jaya in 1979, and later published in two different versions by Gramedia (2003 and 2010).

Although it was intended as a reading of children, the Little Prince had philosophical and idealistic meanings about human life and society. In this novel, Saint-Exupéry tells of the meeting of the main character, a pilot, with a little prince from outer space, in the middle of the Sahara Desert. In their conversation, the author expressed his views about the misunderstandings that are often done by humans and simple truths that are often forgotten by them as they grow older.

"Le Petit Prince (The Little Prince)" is at the 1st Position in this list. 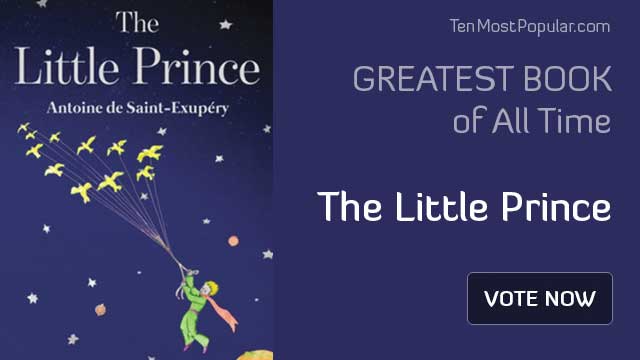