FacebookTwitterWhatsAppEmail
The Da Vinci Code is a mystery novel written by Dan Brown and published for the first time by Random House in 2003 (ISBN 0-385-50420-9). It has become world best seller, with more than 80 million copies sold and translated into 44 languages.

By combining the genres of detective suspense and esoteric New Age, with a theory of conspiracy relative to the Holy Grail and the role of Mary Magdalene in Christianity, the novel spurred the widespread interest (especially in the United States of America) by certain theories of plots "hatched in the shadows by occult powers", a phenomenon defined by Brown as the "conspiratorial boom."

In the book, Opus Dei would allegedly be involved in a conspiracy to cover up the true story of Jesus Christ, who would have married Mary Magdalene and had descendants who came to France, specifically the Merovingian dynasty. The theory exposed literarily by Brown implies that Christianity would have lived consciously within a lie set by the Catholic Church during the last two thousand years. This has aroused a lot of criticism in the academic media for containing historical, geographical, religious and cultural errors and for making statements about allegedly historical facts without providing evidence. These criticisms have even led to the writing of at least ten books that claim to refute their arguments. However, the most controversial part of the novel (the supposed offspring of Jesus Christ and Mary Magdalene) is not an invention of Brown, but comes from the book 'Holy Blood, Holy Grail', translated into Spanish as The Sacred Enigma, written by Michael Baigent, Richard Leigh and Henry Lincoln, for which some lawsuits were filed against Brown for allegedly plagiarizing the aforementioned writers. However, Brown won all the demands.

"The Da Vinci Code" is at the 12th Position in this list. 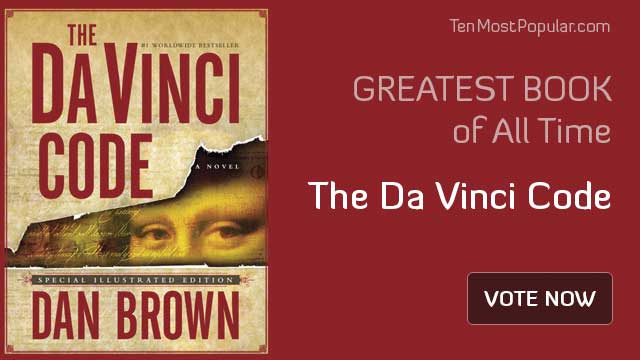