FacebookTwitterWhatsAppEmail
The adventures of Pinocchio also Story of a puppet or simply Pinocchio is a children's novel written by Carlo Collodi. It was published in Italy in the newspaper "Giornale per i bambini" from 1882 to 1883, with the titles "Storia di un Burattino" (History of a puppet), illustrated by Enrico Mazzanti, and is one of the most read works worldwide. Thus, it has translations into more than 260 languages ​​and dialects, including the Braille reading system. The work has also become one of the best-selling books of all time. Since its first publication, the novel has led to various adaptations over time, including audio recordings, plays, films, ballets and opera works.

The first version published in Spain, by Rafael Calleja, son of the founder of Editorial Calleja and illustrated by Salvador Bartolozzi, is a more traditional adaptation of the novel. Alekséi Nikoláyevich Tolstoy wrote a famous adaptation in Russian of the original book, called The Adventures of Buratino (Burattino means puppet in Italian).

"Le avventure di Pinocchio. Storia di un burattino (The Adventures of Pinocchio)" is at the 10th Position in this list. 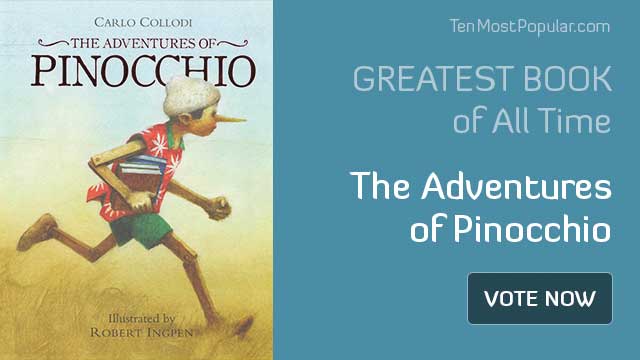