Harry Potter and the Philosopher's Stone

FacebookTwitterWhatsAppEmail
Harry Potter and the Philosopher's Stone is the first novel of the series Harry Potter book, J.K. Rowling will consist of seven books and featuring Harry Potter, a young wizard. This book consists of 17 chapters that describe how Harry learned that he was a witch, made close friends and enemies in the Hogwarts School of Witchcraft and Wizardry, and with the help of his friends blocked the return of the evil witch Voldemort, who killed Harry's parents and tried to kill Harry when he was one year old.

Before the novel begins, Voldemort, the most evil wizard, kills Harry's parents but mysteriously disappears after trying to kill Harry. When the magic world celebrates the fall of Voldemort, Professor Dumbledore, Professor McGonagall and Rubeus Hagrid put this one-year-old orphan in the care of his Muggle aunt and uncle, Vernon and Petunia Dursley.

For ten years, they and their son Dudley treated Harry hard. Simply put before Harry's eleventh birthday, a letter arrives, addressed to Harry but destroyed by his uncle before Harry can read it. As a result, a pile of letters rains into the house in an open, albeit small, gap, and to escape, Vernon Dursleya takes his family to a remote island. When they were calm, Hagrid shattered the door to tell Harry what the Dursleys had hidden from him: Harry was a witch and had been accepted into the Hogwarts School for the coming year.

"Harry Potter and the Philosopher's Stone" is at the 3rd Position in this list. 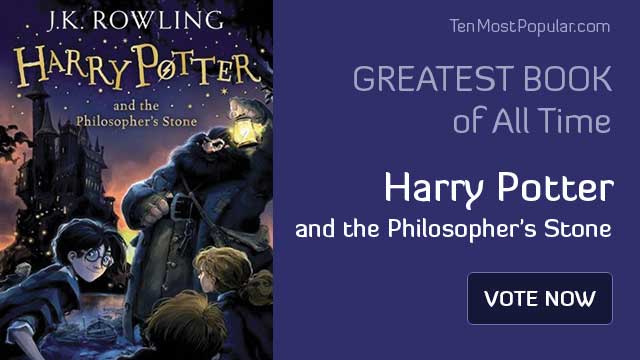