FacebookTwitterWhatsAppEmail
Deepika Padukone is an Indian actress who was born on 5th January 1986 and has emerged as a heroine in Bollywood cinema. During her studies at college, she decided to pursue a career in modeling due to her high stature and beautiful body.

In the last few years, she modeled for famous Indian brands such as Liril, Dabur, Close-Up Toothpaste and Limca. She received many prestigious modeling proposals, including the brand representation of India's Jewel of India. Deepika Padukone recorded her presence on the international scene when Mébillin made her their new international spokesperson. She was awarded for the Top Model of the year at the 5th Kingfisher annual Fashion Awards ceremony.

Shortly after, she was selected as a model for Kingfisher Swimsuit Calendar for 2006, and later in the same year, she won two trophies at Idea Jee Fashion Award, Female Model of the Year (Commercial Assignment) and Fresh Face of the Year. Padukone was selected as the brand ambassador of Kingfisher Airlines and recently for levi's and Tissot.

After achieving success in modeling, Deepika stepped into the field of acting. She started acting in Himesh Reshammiya's pop album Aap Ka Suroor in the song Naam Hai Tera.

"Deepika Padukone" is at the 13th Position in this list. 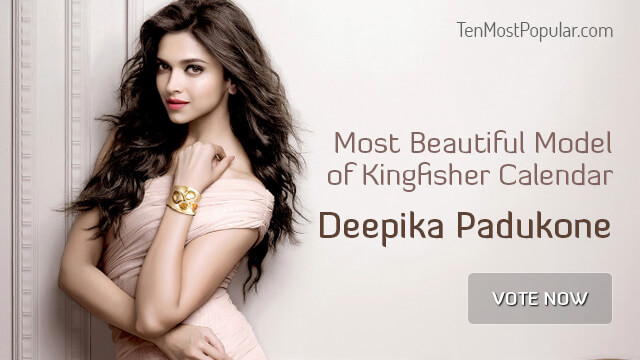