FacebookTwitterWhatsAppEmail
The Taj Mahal (Crown of the Palaces) is a funerary monument built between 1631 and 1654 in the city of Agra, Uttar Pradesh state (India), on the banks of the Yamuna River, by the Muslim emperor Shah Jahan of the Mughal dynasty. The imposing set of buildings was erected in honor of his favorite wife, Arjumand Banu Begum better known as Mumtaz Mahal, who died in the delivery of his fourteenth daughter. It is estimated that its construction required the effort of some 20,000 workers under the direction of a group of architects led by the architect of the court, Ustad Ahmad Lahori.

The TajMahal is considered the finest example of palace, style architecture combines elements of Islamic, one Persian, two Indian and even Turkish. This monument has achieved special notoriety for the romantic character of its inspiration. Although the mausoleum covered by the white marble dome is the most well-known part, the Taj Mahal is a walled complex of buildings that occupies 17 hectares and that also includes a large mosque, a guest house and gardens.

The monument is an important tourist destination of India. In 1983, it was recognized by Unesco as a World Heritage Site for being "the jewel of Muslim art in India and one of the world's most admired masterpieces." Described by the poet Rabindranath Tagore as "A tear on the cheek of time," the Taj Mahal is a symbol of India's rich history. The mausoleum attracts between 7 and 8 million visitors each year and also in 2007 was designated one of the New Seven Wonders of the Modern World.

Emperor Shah Jahan was a prolific patron, with practically unlimited resources. Under his tutelage the palaces and gardens of Shalimar were built in Lahore, also in honor of his wife. Mumtaz Mahal gave her husband fourteen children, but died in the last birth and the emperor, disconsolate, began almost immediately, in 1632, the construction of the Taj as a posthumous offering. All details of the building show their romantic nature, and the set boasts a splendid aesthetics.

Virtually the entire surface of the complex has been ornamented, and is among the most beautiful exterior decorations of Mongolian architecture of any era. Also in this aspect, the motifs are repeated in all the buildings and elements. In proportion to the size of the surface to be decorated, the decoration becomes more or less refined and detailed. The decorative elements belong basically to three categories, remembering that the Islamic religion prohibits the representation of the human figure, calligraphy, abstract geometric elements and plant motifs. These decorations were executed with three different techniques: painting or stucco applied on the walls, incrustation of stones and sculptures.

The total cost of the construction of the Taj Mahal is estimated at 50 million rupees. At that time, a gram of gold was worth approximately 1.40 rupees, so that according to the current valuation, the sum could mean more than 52.8 billion rupees (U.S. $827 million). It should be borne in mind, however, that any comparison based on the value of gold between different times is often very inaccurate.

"Taj Mahal, Agra, Uttar Pradesh" is at the 2nd Position in this list. 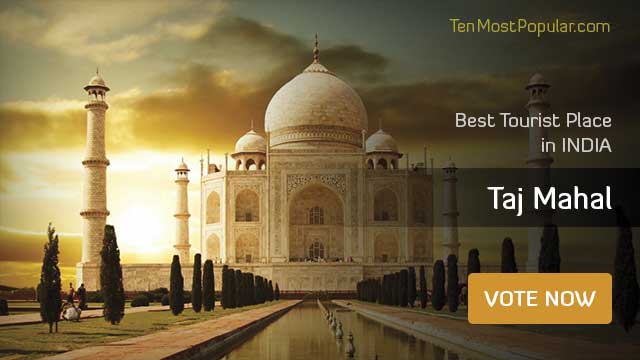