FacebookTwitterWhatsAppEmail
The Statue of Unity is a statue of Indian independence fighter Sardar Vallabhbhai Patel (1875-1950) in the Narmada district, Gujarat, India. This statue is the tallest statue in the world, with a height of 182 meters (597 ft). Vallabhbhai Patel was one of the leading leaders of the Indian independence movement, and was the first Deputy Prime Minister of India. This statue is located on an island in a river, facing the Narmada Dam (also referred to as the Sardar Sarovar Dam) near Rajpipla, 100 kilometers southeast of the city Vadodara.

The monument and its surroundings occupy an area of more than 2 hectares (4.9 acres), and are surrounded by an artificial lake covering 12 km² (4.6 sq mi, 3000 acres). Built by Larsen & Toubro, who received a contract for ₹2,989 crore (US $ 470 million) for design, construction and maintenance in October 2014. Construction began on October 31, 2014 and was completed in mid-October 2018. This statue was designed by Indian sculptor Ram V Sutar, and was inaugurated by the Prime Minister of India, Narendra Modi on October 31, 2018, to coincide with Patel's 143rd birthday.

Narendra Modi first announced this project to remember the services of Sardar Vallabhai Patel on October 7, 2010 when a press conference marked the beginning of the 10th year he served as Chief Minister of Gujarat. At that time, the project was dubbed, "Gujarat's respect for the nation". A body named Sardar Vallabhbhai Patel Rashtriya Ekta Trust (SVPRET) was formed by the government of Gujarat to carry out the project.

A movement called the Unity Sculpture Movement began to support the construction of the statue. This movement helped to collect the iron needed to build the statue by asking Indian farmers to donate their used farming tools. Finally, 5000 tons of iron were collected. Although initially intended for the construction of sculptures, it was decided that the collected iron would be used for other parts of the project.

The United Sculpture Movement organizes a petition suraaj ("good governance") signed by around 20 million people, and is the largest petition in the world. A marathon titled Run For Unity was held on December 15, 2013 in the city of Surat, India to support this project.

The statue depicts the figure of Vallabhbhai Patel, one of the most prominent leaders of the Indian independence movement, the first Deputy Prime Minister of India, and was responsible for the unification of hundreds of princely countries to form a modern Indian state.

After studying many of Patel's statues throughout the country, a team of historians, artists and academics chose to approve the design proposed by Indian sculptor Ram V. Sutar. The Statue of Unity is a replica that is much larger than the statue of Patel at the Ahmedabad International Airport. Commenting on sculpture design, Ram Sutar's son, Anil Sutar explained that "statues' expressions, postures and poses display the dignity, confidence, strong will and kindness that emanates from Patel's own persona. His head is staring slightly up, the scarf is on his shoulder and his hands are to be on the side as if to indicate he will walk". Three design models measuring 3 feet (0.91 m), 18 feet (5.5 m), and 30 feet (9.1 m) were created. After the largest model design was approved, a more detailed 3D scan was produced and became the basis for bronze plating in the casting process that took place in China.

The total height of the building structure from the most basic is 240 m (790 ft), with the lower part of the statue as high as 58 m (190 ft) and the statue itself is 182 m (597 ft) high. The height of the statue that reached 182 meters was specifically chosen to equal the number of seats in the Gujarat Legislative Assembly.

"Statue of Unity, Kevadiya colony, Narmada, Gujarat" is at the 19th Position in this list. 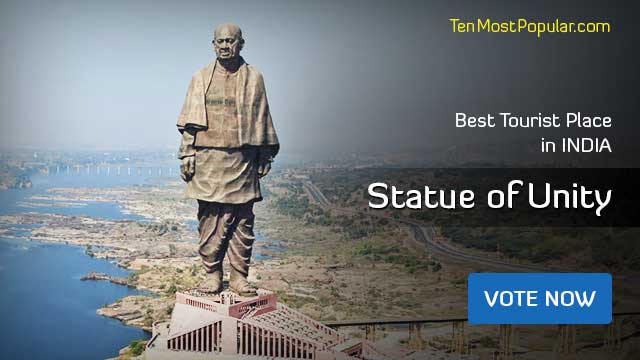