FacebookTwitterWhatsAppEmail
Khajuraho is a small city in the state of Madhya Pradesh, about 620 km southwest of Delhi, the capital of India. The term Khajuraho may derive from the Hindi word khajur which means date palm.

The set of temples was built over a hundred years, from the year 950 by the year 1050, equipped with a central area protected by a wall with eight gates, each of which with two palms of gold. In the golden age of the city, there were more than 80 Hindu temples, of which only 22 are in a reasonable state of conservation, spread over an area of ​​about 21 km².

They are an example of the link between religion and eroticism and are excellent demonstrations of Indian architectural styles that have gained popularity due to the lurid depiction of some aspects of the traditional way of life during medieval times in that region. They would be rediscovered only during the twentieth century, having suffered greatly from the growth of the surrounding jungles that caused damage to some of the monuments. The economic and financial decline of the Rajputs Chandelas is regarded as the main reason for abandoning the site as a center of worship and social life, and is therefore the main cause of the deterioration caused by the action of nature elements to monuments.

The set of monuments was classified by UNESCO as World Heritage. The temples of Khajuraho, built through spiral superstructures, fit into the Shikhara style of the temples of northern India and sometimes to the Panchayatana plant or scheme.

Some temples are dedicated to the Jain pantheon and the rest are dedicated to Hindu deities, highlighting the Trinity Brahma, Vishnu and Shiva, and various other Devas forms. The Panchayatana temples were endowed with four rooms of worship in the four corners and a main room in the center of the podium that consisted of its base. The temples were grouped into three geographical divisions: eastern, western and southern.

"Khajuraho Group of Monuments, Madhya Pradesh" is at the 3rd Position in this list. 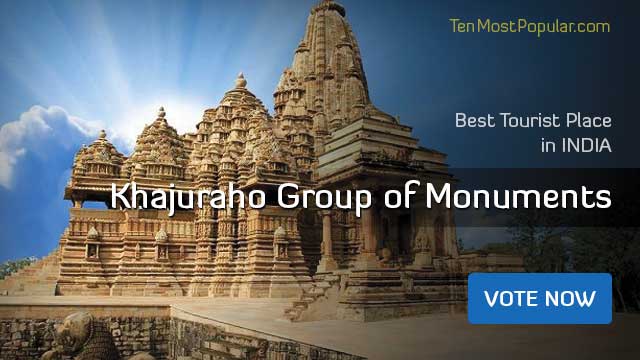