Malaysia - As a Muslim Country

Malaysia is a secular de-facto multi-racial country, at the same time recognized by the official Islamic status. According to the 2000 census diagram, about 60.4 per cent of the Malaysian population practices Islam, 19 percent Buddhism, 9 percent Christian, 6 percent Hinduism and 3 percent of Confucianism, Taoism and other traditional Chinese religions. The rest embrace other beliefs, including animism, Sikhism and Bahá'ís. As required by Malaysian law and defined in Malaysia's constitution, Malay can give up its ethnic status if he is a non-Muslim. However the vice versa is invalid. Muslims are primarily Malays although there are mostly Indian and growing number of ethnic Chinese converts.

Some young Muslims, especially those who are raised in a more secular or westernized, are partly Muslim. They observe the practice of the holy month (Ramadan) during fasting during the daytime which is mandatory, and avoids eating pork but they do not perform the five-day prayer or go to the mosque regularly.

At the same time, the growing numbers of Malays have taken this religion more seriously, with the increasing popularity of Islamic finance and the increasing number of women chooses to wear headscarf.

Shafi'i's teaching, which is one of the branches of Sunni, is the main sect in Malaysia. However, in some remote areas, there is still an element of insecurity in their Islamic teachings. The mosque has become common place throughout the country and Azan's voice can be heard from the mosque dome 5 times daily. The government and banking institutions will be closed for two hours on Friday to honor employees who need to pray in congregation at mosques. In some states such as Kelantan, Terengganu and Kedah, they choose Friday and Saturday instead of Saturday and Sunday as public holidays.

The term "Islam Hadhari" or progressive Islam was introduced by former Malaysian Prime Minister, Tun Abdullah Ahmad Badawi, to emphasize the key role of knowledge in Islam. Diligence, honesty, good administration and competence are given the same value. He also appealed to Muslims to be thorough, tolerant, and outward-looking.

Abdullah Mohd Zain, Minister in the Prime Minister's Department, said that "It emphasizes wisdom, practice, and harmony," and adds that It promotes simplicity or balanced approach to life, without deviating from the fundamentals of the Koran, examples and proverbs of the Prophet Muhammad.

It is generally accepted that Islam existed for the first time in Malaysia in the 10th century in Terengganu which was the first Malay state to accept Islam. This view is based on Batu Bersurat Terengganu found in Kuala Berang, Terengganu. The inscription is dated 1303.

It can therefore be estimated, Sultan Muzaffar Shah I (12th century) from Kedah embraced Islam earlier and became the first Malay ruler known to do so. However, Islamic convergence by Sultan Megat Iskandar Shah, formerly known as Parameswara, was an important event in the acceptance of Islam by the Malays in Malaya.

The veil is a relatively new and intangible introduction to the rise of Islam around the world in the 1980s.

Islam is central and dominates in Malay culture. A large number of Malay words have the origins of Arabic language, the preferred language of Islam. However, there are also Malay words derived from Portuguese, Chinese, English and French. Islam is already part of the Malay identity so that Islamic customs have been assimilated to Malay culture. In the daily context, Muslim and Malay words are often interchangeable.

Hari Raya Aidilfitri (Eid ul-Fitr) is an important celebration for Muslims in Malaysia.

As enshrined in the Malaysian Constitution, Malays should be Muslims, regardless of their ethnic heritage, otherwise they are non-Malays in terms of law. This means that the apostate Malay loses all their privileges including the Bumiputera status which provides a route for the use of a policy of resorting to university entry, vehicle purchase discounts, property etc.

"Malaysia" is at the 1st Position in this list. 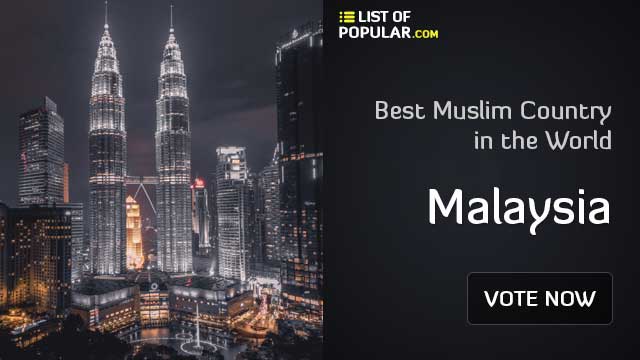