Sina Weibo is a Chinese social networks website, like Facebook and Twitter. It is used by approximately 30% of Internet users in China, reaching a penetration close to that of Twitter in the United States, as by mid-2012 it had about 368 million registered users.

In reaction to the censorship, SINA Corporation launched on August 14, 2009, a trial version of Sina Weibo, an alternative to microblogging communication that integrated characteristics similar to those of other social networks.

Sina Weibo incorporates various features similar to those of Twitter, including:

In addition, emoticons can be added and audio, videos and images attached to each publication.

It is a hybrid system between Twitter and Facebook. Sina Weibo is sometimes referred to as "Chinese Twitter". The site is available in Simplified Chinese, Traditional Chinese and English.

Like any microblogging site, weibos are at the origin of the creation of new communities. Internet users use Sina Weibo to get news about recent events, follow current topics and debates. Weibo is also used to publish and broadcast personal things. Users can build their own web pages, WAP, etc.

As a result of the censorship established in China to social networks, Sina Weibo has rigorous controls over the publications made through it. According to the journalist Rebecca MacKinnon, the microblogging network has a body of 1000 people dedicated to controlling the content that appears in it.

From March 31 to April 3, 2012 the services of Sina Weibo were suspended, under the argument of avoiding rumors of a coup in China.

In 2012, the mandatory registration of real names of microblog users with the Chinese government was established. The authority allocated more than 3 billion dollars in incentives for citizens to comply with the measure.

In August 2009, Sina Corporation creates what will quickly become the most famous and influential weibo, Sina Weibo. The growth of its notoriety is fast. In October 2010, after fourteen months of existence, Sina Weibo has more than 50 million users and two billion tweets published. On April 17, 2014, Sina Weibo enters NASDAQ, New York.

"Sina Weibo" is at the 9th Position in this list. 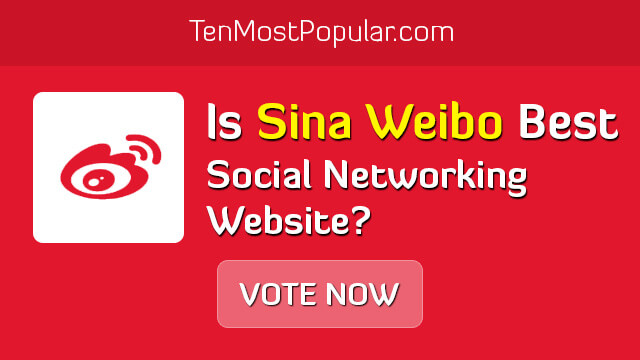