"Odnoklassniki" (OK.ru) - Russian social network, owned of Mail.ru Group is. At the beginning of 2019, the fourth most popular site in Armenia, the sixth in Russia, the fifth in Azerbaijan, the sixth in Kazakhstan, the seventh in Ukraine, the 21st in the world. The project was launched on March 26, 2006.

According to a survey conducted in December 2017. VTsIOM, 19% of Russian Internet users use their Odnoklassniki account every day/almost every day.

On March 26, 2006, the Odnoklassniki project was launched.

The creator of the site, Popkov Albert Mikhailovich, who lives in London and works in the field of telecommunications, took part in the creation of similar projects in other European countries. From March to November 2006, the project existed as a hobby and was commercially mentioned only in a friendly advertising agency as a platform for advertising. The number of users who registered on the site grew exponentially, so the founder of the project decided to create a separate legal entity.

By July 2007, the social network Odnoklassniki has increased its audience to 4 million users.

In July 2009, Odnoklassniki social network ranked fifth in terms of monthly reach for an audience of Russian Internet users aged 14-55 among all Russian-language resources.

After the introduction of paid registration was introduced in 2008, the popularity of the site fell sharply and users began to go to the main competitor of VKontakte. In 2010, Odnoklassniki again became free.

The Odnoklassniki social network has more than 45 million registered users. According to TNS Web Index, 56% of the audience are users aged 25-44. The share of managers and specialists is 19% and 28%, respectively.

In early April, games appeared in the beta testing site, the developers of which were i-Jet.

On December 24, users of the Odnoklassniki social network got the opportunity to test the beta version of the video chat.

On May 16, 2017, President of Ukraine Petro Poroshenko signed a decree that enforced the NSDC decision to update the list of sanctions against a number of Russian companies, including VKontakte and Odnoklassniki social networks, Yandex, electronic mail service Mail.ru, and so on. like that. Restrictions on the site "Classmates" should come into effect by June 1.

On July 11, Odnoklassniki launched an advertising office for small businesses and content creators.

From October 2008 to September 2010, it was possible to register for free only a limited functionality account. In this version it is impossible to send messages, upload and rate photos, leave comments in forums and visit pages of other users. To be able to use these functions, it was necessary to send a paid short message.

In addition, the site provides a number of paid services: deleting ratings and good ratings for your photos, disabling messages that the user is online, providing a wide selection of “smiles”.

Since January 23, 2009, a new service has appeared that allows you to clear the page of uninvited guests, removing them from the list of views. Also now you can close the page from everyone except friends.

Currently, deleting ratings of your photos, as well as guests from the list of views is free.

On August 31, 2010, the leadership of the social network canceled paid registration. The official reason was “the development of new effective ways to combat spammers”.

In February 2016, the social network, together with the partner bank VTB 24, introduced the ability to make money transfers between network users. The commission for each transfer will be 30 rubles, if the amount does not exceed 500 rubles, or 60 rubles for transfers ranging from 501 to 8 thousand rubles, transfers are made between cards of payment systems MasterCard, Maestro, Visa issued by Russian banks and tied to user profiles.

In accordance with the "Law on Bloggers" the network is recognized as the organizer of the dissemination of information and 11/18/2014 is entered in the relevant register under the number 16-PP.

"Odnoklassniki" is at the 31st Position in this list. 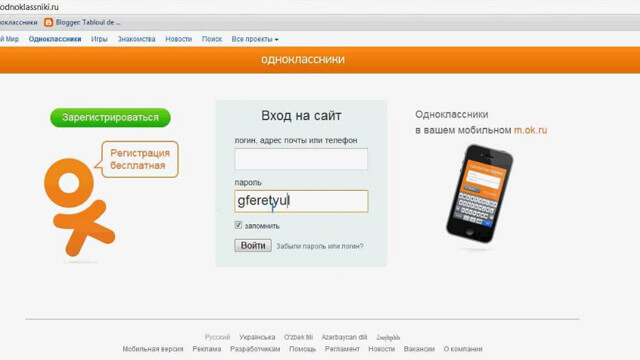