FacebookTwitterWhatsAppEmail
Myspace is a social networking site. The head office is located in Beverly Hills, California, and is in an office building with the company's direct owner, News Digital Media, owned by News Corporation. MySpace became the most popular social networking site in the United States in June 2006. Based on comScore, MySpace was followed by its main international competitor, Facebook in April 2008. MySpace employs 1,000 employees in June 2009. The company does not disclose revenue or profits separately from News Corporation.

Moods: Moods are small emoticons that are used to describe the mood of MySpace users. This feature was added to MySpace in July 2007. In 2010, this mood feature was not included by default in the status update, but can be used on the homepage as a separate update.

MySpace allows users to customize user profile pages by entering HTML (but not JavaScript) into sections such as "About Me", "I'd Like to Meet", and "Interests". Videos and flash-based content can be included in this way. Users also have the option to add music to their profile pages via MySpace Music, a service that allows bands to put their songs on MySpace.

A user can also change the general appearance of the page by entering CSS (in the &lt;style&gt; ... &lt;/style&gt; element) into one of the fields to overwrite the default page style sheet using the MySpace editor. This is often used for font and color selection. There are several independent websites that offer the function of designing MySpace layout that allows users to choose and review what their page will look like with the help of the design. In 2008, MySpace launched the new Profile 2.0 as the next generation of MySpace profiles. Profile 2.0 has an interface clean and the ability to hide or display profile modules, along with adjusting the module position on the profile. The layout of Profile 2.0 layout was released on the internet directly in quick time due to the use of the classic MySpace layout not working with Profile 2.0.

Profile 2.0 was criticized for not considering rights when trying to add custom CSS. To add custom CSS, the original theme will be discarded and make a lot of MySpace tweaks not functional in the Profile 2.0 layout. In 2010, MySpace left the Profile 1.0 layout and made Profile 2.0 a standard profile feature. The advantage is a clean interface and many themes packed with customizer, also by creating custom themes using various profile editing parameters. Application is used for decoration. While Profile 2.0 is a standard layout, a new profile is launched as an optional quality improvement. This new profile was launched to keep up with trends from the modern profile interface and provide a more mature and simple design. Profile 3.0 allows users to use more flexible customizations and build themes more simply, but not much different from the Profile 2.0 interface.

MySpace profiles for musicians on the MySpace Music website are different from normal profiles, this profile allows artists to upload their entire discography consisting of MP3 format songs. The uploader must have the right to use songs (for example their own works, permits granted, etc.). Non-contracted musicians can use MySpace to send and sell their music using SNOCAP, which has proven popular with MySpace users.

"Myspace" is at the 27th Position in this list. 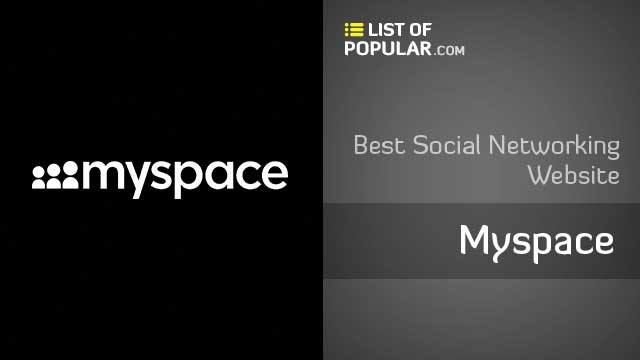