FacebookTwitterWhatsAppEmail
LinkedIn is a social community oriented to business, to business and employment. Based on the profile of each user, which freely reveals their work experience and skills, the web puts millions of companies and employees in contact. Founded in December 2002 by Reid Hoffman, Allen Blue, Konstantin Guericke, Eric Ly and Jean-Luc Vaillant, was launched in May 2003.

On May 19, 2011 became the first US social network to put shares on the stock market, with an initial price of US $45. The acceptance of the social network by investors was such that their shares rose 109%, up to 94 dollars and their stock price reached 8900 million dollars on Wall Street.

In March 2013, it had more than 200 million registered users, of more than 200 countries, covering all the Fortune magazine companies of the 500 largest US companies. It is followed in a distant second by Viadeo.

On June 13, 2016, Microsoft announced the purchase of LinkedIn for 26.2 billion dollars.

According to Microsoft, LinkedIn's growth pace and product diversification were essential to catch the attention of the creator of Windows. In figures presented by the company, the corporate social network has presented an average growth of 19% on year, with more than 433 million registered members.

In addition, there are 105 million unique visitors per month (a 9% growth on year), greater engagement in its mobile application, 60% of total hits and a 34% increase in page number views, 45 billion views in the last quarter. There was also a 101% increase in the number of active job ads with seven million vacancies.

"LinkedIn" is at the 8th Position in this list. 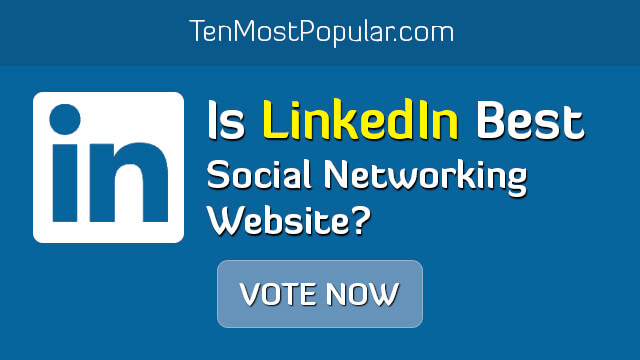