FacebookTwitterWhatsAppEmail
FilmAffinity is a website dedicated to cinema. FilmAffinity was created in Madrid in 2002 by film critic Pablo Kurt Verdú Schumann and programmer Daniel Nicolás. From the beginning, the page consisted of a film recommender system called "Almas twins", which showed the closest people according to the scores given to the films. Three years later, the criticism section was launched, where users expressed their opinion about a film.

The American edition of PC Magazine (April 2004) included FilmAffinity among the 100 best websites to discover in the world (100 websites that you did not know you could live without). In the same issue, considered it the best website in the entertainment category.

It is a film recommender system, with a database where you can find the complete file (technical and artistic) of a large number of films, documentaries, short films, medium-length films and television series.

Each film receives a score calculated as the average of the scores received by the users, who can also post their criticisms. The latter can be voted by the users who consult them to give greater importance to those who provide more relevant information about the films.

Each user can compare their votes with those of the rest and find people with similar ratings in those films. This type of coincidence, is what is called soulmates on the web. The mail section allows you to start a conversation both with the twin souls and with the friends who have been added to the web.

FilmAffinity allows users to create lists of movies that meet a certain characteristic (best action movies, worst movies you've seen, etc.). If a movie is added to the same list by different users, it can go on to enter the list ranking. It also allows you to see all the premieres of movies and video stores, trailers, box office collections and several classifications of the best rated movies by users.

"FilmAffinity" is at the 26th Position in this list. 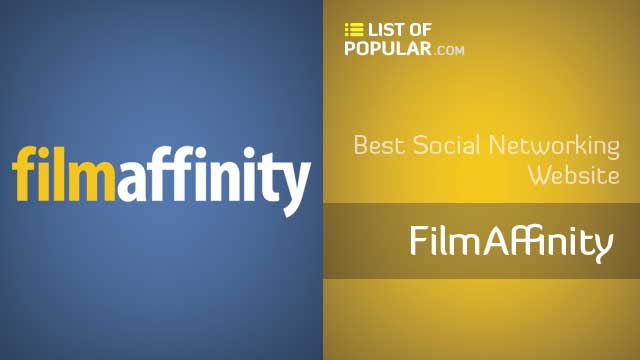