Watercress (douban) is a Chinese social networking site, with audio books started to provide information on books, movies, music information and other works, whether describing or comments are provided by the user, is a Chinese Web 2.0 site in a web site distinctive. The website also provides a variety of service functions such as book audio and video recommendation, offline city activities, group topic exchange, etc. It is more like a collection system (reading, film, music), expression system (I read, I see, I listen) and exchange The innovative network service of the system (the same city, group, and neighbors) has been dedicated to helping the urban people discover useful things in life. The website was founded on March 6, 2005 by Yang Bo (net name "Abei").

In 2012, Douban read online and began to enter the field of online e-book copyright. In August 2012, Douban announced that its monthly number of unique visitors (Unique Visitors) has exceeded 100 million, with an average daily PV of 160 million. In the second and third quarters of 2013, the number of independent users of Douban monthly coverage reached 200 million, which was doubled compared with the same period of last year.

The name of Douban was originally written by the founder Yang Bo when he wrote the website at the cafe near Beijing Douban Hutong, and he named it Douban.

Like most Web 2.0 sites, Douban content can be added by users, and the music, books, movies, etc. listed therein can be collected, commented, scored, etc. The website program algorithm can perform similar recommendation according to the user's favorite movie, book, etc., that is, after the user provides a certain amount of collection information, the watercress will automatically select other members who are most like the taste of the member according to the algorithm, and the member you can find users who are "smelly like". Douban will also give a list of "Douban guess you will like" to recommend music, books or movies that may be appropriate to the user.

Users can share and recommend books, movies and music, and second-hand transfers by joining the same city, group, and neighbors, and living in the same area, or like a common theme, or members who are interested in each other.

Because Douban and Time Net are different from the professional film critics score on the Rotten Tomato website, anyone can score on it (even before the film is released), so there are people who maliciously brush up for their own interests and purposes. Low score phenomenon. Founder a Bei publicly answered the anti-cheating and anti-brushing procedures of the Douban movie score in the article "Double Film Rating Eight Questions" in the daily Douban WeChat public account, and claimed that there is no "modified movie" in the background. The function of scoring to ensure the fairness of the score. In fact, according to the Southern Weekend report of 2018, although the Douban failed to completely avoid the phenomenon of brushing by the water army, its platform barrier and anti-brushing mechanism caused the brush to be manually brushed, resulting in a relatively high cost of brushing. Other platforms are several times higher.

Users can cancel their own accounts, due to violation of community management principles, accounts will be logged off by administrators.

On January 19, 2009, Douban was included in the list of the fourth batch of exposure sites because it was considered "a large number of pornographic content in the group". On January 21st, the Internet Violation and Bad Information Reporting Center issued a notice stating that although the watercress had been cleaned up, "there are still vulgar content."

In February, a large number of groups with political information and democratic ideology were forced to dissolve. In addition, some Renaissance paintings stored in a photo album by a Douban user were deleted by the webmaster in the name of "pornography". Then there were users who launched an online campaign called "Anti-vulgar, Wear Clothes for Famous Paintings" on Douban to protest. Later, Douban restored the user's photo album, but the online event was also closed. Guangzhou "Information Times" reported that the staff of the Douban Media Outreach Department pointed out that the previously deleted posts with nudity pictures took into account the requirements of the anti-pornography content of the relevant departments. To be on the safe side, the site closed some posts that could not be judged to be pornographic.

On July 24, 2017, Sina Weibo CEO Wang Gaofei forwarded an article on the personal Weibo, "Only the boss of the B station can save the A station", and excerpted one of the words "the two most valuable in the Chinese website circle" The group of users is the user group of Douban and acfun, which has caused some dissatisfaction and criticism from Douban users. Some Douban users are self-deprecating and indeed "valueless users", and even created related cultural and creative product designs. On July 29, Wang Gaofei explained that he said that all the online communities had the problem of "abandonment of old users".

In February 2011, Sina Weibo netizen "Snow Blind" issued a document saying that he made a "movie" called "Cannot enter the castle even if it became a beetle Kafka" a year ago, and created it on the watercress. The relevant pages, all "movie content" are derived from their own experiences. After one year, this "film" that did not exist was rated by the Douban netizen with a score of 8.9, which was equal to "The Lord of the Rings" and "Let the Bullets Fly", even surpassing "Avatar" and "Titanic". In the 235 netizens who rated the score, the evaluation of the five-star rating was as high as 88.8%. At the same time, 2457 people said that they wanted to watch the movie, and some even made a "story detail" of the "movie" completely fabricated. Detailed reviews. After the "snow blind" exposed the truth of this prank, Douban deleted the page of the so-called "movie".

However, "Snow Blind" also posted on Weibo on February 20, 2011. Many of the film reviews were deliberately added by users after Weibo, to "make things more fun", and in 2016 due to media misunderstanding, in Douban The Internet once again broadcasted a clarification that the incident was "a joke for many years" and showed that "Douban is the most authoritative and credible film scoring platform in the country".

On December 27, 2016, the People’s Daily client forwarded the article "China Film News" and renamed it "Douban, Cat Eye Movie Ratings Faced with Credit Crisis and Bad Damage to the Film Industry". The article points out, watercress, cat's eye for three main schedule of the new movie "railroad Flying Tiger", "ferryman", "Great Wall" of the score is too low, so many viewers of the Lunar New Year stalls domestic film disappointed, and even refused to watch the domestic film.

Some netizens are worried that the authorities will protect domestically produced movies, and may tighten control over online communities such as Douban. So they screamed on the Internet and refute the allegations that the waters in the text were maliciously "swapping". However, the People’s Daily’s commentary published an article on "Chinese film on December 28th." It is necessary to admit that the audience has the right to "vote with their feet" and also to recognize that the audience has "stars". The right to rating, this is a choice, and thoroughly related to the article "Evil Review". Subsequently, a large number of users of Douban played a star of revenge on the three films, resulting in lower scores than before. netizen heat spread in December 2015, the founder and CEO of Douban, published a detailed introduction to the Douban film's scoring mechanism article "Double Story Rating Eight Questions".

The media once reported that the State Administration of Radio, Film and Television's Film Bureau interviewed the head of Douban, but Zhang Hongsen, the director of the Film Bureau, denied this statement in the WeChat circle of friends, saying that the relevant reports had excessively "conjected" the fact that the film bureau had not had any contact with Douban. I don't know anyone of Douban, but I really want to have the opportunity to contact and discuss ways to promote film progress.

Since the audience rating of the China Central Television Spring Festival Gala in 2017 was low, only 2.4 points (corresponding to a perfect score of 10 points), negative comments were officially deleted, and the title of "2017 CCTV Spring Festival Evening" could not be searched on Douban, its comment function has also been closed. Currently, the 2016 Spring Festival Evening entry cannot be graded.

After the release of the film "Pure Mind, Dream-Driving Entertainment Circle", the score of Douban was 2.0 points on the website's new low, which caused the film to be dismissed only for 5 days. The film side believes that too many negative comments are the cause of the film box office encounter "Waterloo", easy to publish an open letter on September 22, dissatisfied with the film scored only 2 points in Douban, saying that "a young director spent 12 years of hard work seriously to China Filming, was ruined by Douban!" On June 1, Douban film officially refuted Bi Zhifei and his company to the Chaoyang District People's Court in Beijing, saying that Bi Zhifei was in a "letter to the National Film Bureau" Some of the content is "dirty, seriously inconsistent with the facts" and requires the defendant to immediately delete the infringing articles published on Weibo and WeChat, and request the defendant to apologize on Weibo and WeChat public account respectively, and bear the litigation costs.

In 2018, the Chinese documentary film "Awesome, My Country" prohibits the public from commenting on the Douban website in person, canceling the self-rating function of netizens. The only comments are based on the official mainstream media in mainland China. Lord, the film's rating is also expressed in the form of media: the media score is 8.5 points.

During the Spring Festival of 2019, after the film "Wandering Earth" was released, the score of Douban reached 8.5 at one time, but due to a large number of users giving a star rating, coupled with the suspected high praise, it was changed to a bad review. The "Wandering Earth" score fell to 7.9, and the watercress's scoring mechanism was once again questioned. To this end, including the "Wandering Earth" fans, a large number of netizens went to the major application markets to brush up the bad reviews to express dissatisfaction, Douban APP in the major application market scores also suffered an avalanche. In the application market, there are many commentators who like the taste of the Douban bad review (such as "If the criticism is not free, then praise is meaningless", "give a star balance", etc.), thus derived the so-called "bean learning", that is, imitating watercress the tone of bad reviews ridicules other things.

"Douban 250" is a ranking set up following the IMDB 250, which aims to list the 250 most popular movies, music albums and books. The ranking results are based on the number of users and the scores, and are weighted and integrated by algorithm analysis.

"Douban" is at the 32nd Position in this list. 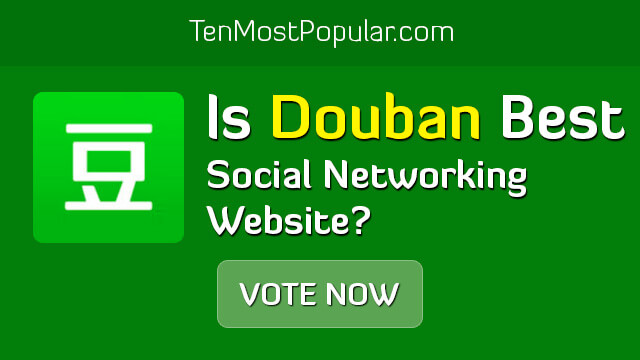