Badoo is a social network founded in 2006 by the Russian businessman Andrey Andreev. The company, whose headquarters are located in Soho, London, is owned by a company located in Cyprus. In September 2011, the British magazine The Economist published an article explaining the great opportunity that Badoo has to become "one of the leading Internet companies in Europe" due to the discovery of a new and wide market share. Badoo is a social network that allows you to meet new people through the Internet.

In May 2012, the company announced that it had reached 150 million registered users worldwide. The portal operates in 180 countries and its main activity is in Latin America, Spain, Italy and France. Badoo ranks 52th among the most popular websites in France and 117th worldwide, according to Alexa Internet. In July 2011, Badoo.com ranked 59 of the most visited websites in the world, with 46 million unique monthly visits, ahead of CNN.com (position 60). Badoo grows at a fast pace: 150,000 new people register on the web every day.

A study carried out in 2009 on the protection of privacy in 45 social networks placed Badoo in one of the last positions.

Andrey Andreev, founder of Badoo, continues to focus on Badoo's strategy, as well as on the development of new products and new projects so that Badoo is continually updated and updated both on the web and on mobile platforms. Besides being the founder of Badoo, he has created other highly successful online companies: SpyLog, Begun and Mamba.ru.

Jessica Powell is the company's director of business development. Powell has more than a decade of experience in the digital industry, having held various executive positions in Europe, the United States and Asia. Prior to joining Badoo, she was Director of Communication and Public Affairs at Google, being responsible for the company's internal and external communication strategy in the Asia-Pacific region.

The business director of the company is Andrew Parker. Parker is in charge of managing all the financial, legal and administrative aspects of Badoo. His career has gone through companies such as PricewaterhouseCoopers, Sony and V2 Music Group.

Among the new additions to the Badoo team is Benjaming Ling, former executive of Google, as director of operations at Google. From his position as Chief of Operations, Ling will be in charge of overseeing product development, engineering, business and corporate development, as well as alliances.

Badoo is a social network. The website was created by the Russian entrepreneur Andrey Andreev and was launched in London in November 2006. Badoo employs more than 200 workers around the world.

In January 2008, Badoo obtained 35 million dollars from Finam Capital, which acquired 10% of the company. These funds will serve to help the expansion of Badoo in Russia, where the social networking market is starting to grow. Since 2009, Finam owns 20% of Badoo.

In April 2011, Facebook threatened Badoo with withdrawing its application from the social network if it did not make it less viral. According to Insidefacebook.com, during the week of January 11, Badoo ranked 17th in the list of the fastest growing Facebook applications. Badoo is also a network where you can investigate and catalog users to see their intentions and know what they are looking for with what the Civil Guard and other state security bodies discover many criminals.

Impact on the media

In 2008, the PDA blog of the British newspaper The Guardian reviewed Badoo.

Web of Trust (WOT), a virtual community in charge of evaluating and rating web pages, described Badoo as a secure and trustworthy site, although at the risk of spamming and phishing. In April 2011 the magazine Wired published a report in July on Badoo and its founder.

According to TopTenReviews, Badoo is "a chat room, a dating site and a site for appraising photos disguised as a social network". According to this page of reviews, Badoo did not offer any group or other type of community to facilitate its users to meet related people. In April 2011, Badoo was censored in the United Arab Emirates and elsewhere. Techcrunch states that since January 2010 the Iranian government has blocked Badoo's access to Iran.

Badoo is a website with a business model known as Freemium, most of the services on the site are free but there are also others, with a minimum cost, which serve to improve the user experience. The Upload service "up" is an example. This consists in that the profile of the users appears in the first positions of the search results during a limited time.

At the end of 2007 it was known that 20% of the then 22 million Badoo users used this service once a month. Lloyd Price, marketing director of Badoo, said: "By the end of 2011 we hope to reach 140 million users, generate more than 100 million dollars a year in gross revenues of our users and reach more corners of the world."

"Badoo" is at the 2nd Position in this list. 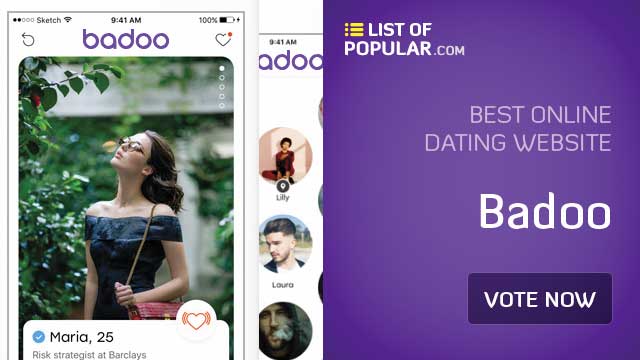