FacebookTwitterWhatsAppEmail
Subway is a chain of restaurants of fast food specialized in the development of submarine sandwich and sandwiches, salads and pizza serving. Its headquarters is located in Milford (Connecticut). It is in the third position at the business level, behind McDonald's and KFC (according to data from Forbes, April 2013).

It has more than 44,852 establishments spread across 112 countries since September 11, 2016, having in the United States only 26,709 points of sale, which makes it the largest franchise in the world in number of establishments and in the second group of bigger restaurants, behind Yum! Brands.

The headquarters of Subway is located in Milford, five regional offices are responsible for the growth of international business. In Europe, the headquarters of the regional company are located in Amsterdam, The Netherlands, Australia and New Zealand are administered in Brisbane, Asian stores are managed in cities such as Beirut, Kuala Lumpur and Singapore, while Miami, Florida, Latin America is responsible for company growth.

In 1965, when he was 17 years old, Fred De Luca borrowed $1000 from his friend Peter Buck to launch his first sandwich establishment in Bridgeport, Connecticut, with which he wanted to earn money to pay for college. The store was originally called Pete's Submarines, but it was changed shortly by Pete's Subway. When the chain of restaurants grew, it was shortened and was renamed only Subway.

The first location on the west coast was opened in Fresno, California, in 1978. The first Subway located outside the United States opened in Bahrain in December 1984. After consolidating in the United States due to its franchise model, Subway expanded to the European and American continent. With the passage of time it passed to other non-traditional markets, such as the interior of several Wal-Mart establishments, university campuses, or US military bases abroad.

"Subway" is at the 7th Position in this list. 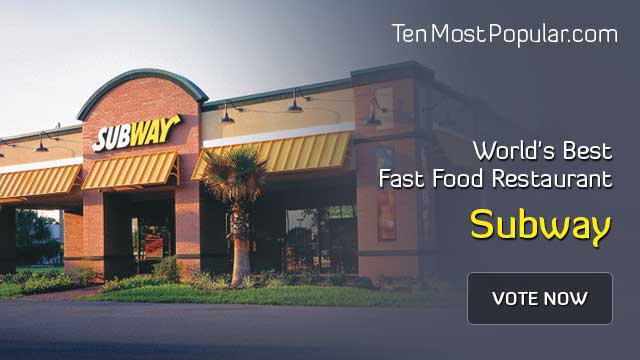