Pizza Hut is a chain of restaurants of fast food subsidiary of the group Yum! Brands. He is known for his Italian - American cuisine menu that includes pizza and pasta, as well as side dishes and desserts.

It is in fifth position at the business level, behind McDonalds, KFC, Dominos Pizza and Subway (according to Forbes data, April 2013).

The company was created by brothers Dan and Frank Carney, who opened their first restaurant on June 15, 1958. The company has more than 14 100 locations in 100 countries.

The Pizza Hut story began in 1958, when two students from Wichita (Kansas), brothers Dan and Frank Carney, set up their own restaurant.

They decided on a pizzeria thanks to the advice of a friend. To get it started they borrowed $600 from their mother, with whom they would buy the material, and allied with a capitalist partner, John Bender.

The place opened on June 15 of that same year with the current name, inspired by its first establishment, which in Spanish means "The Pizza Hut".

Thanks to the success of his business, the first franchisee in Topeka was opened in December 1958. Convinced that their business could expand in the United States, the Carney brothers contacted a Wichita architect, Richard D. Burke, to design the new premises with a red-tile roof and hat-shaped, distinguishable from the competition.

In 1965, when advertising campaigns for television began, 150 restaurants were reached. And in 1969 it was developed internationally with openings in Canada and Australia. With such growth, the company had many problems controlling all of its new franchisees and it took eight months to unify the accounting.

In 1970 a new business plan was developed: Pizza Hut became a public limited company and two years later it entered the New York Stock Exchange. With greater control over quality standards and finances, the number of 2000 restaurants was exceeded in 1976, of which 100 were abroad.

In 1977, the Carney brothers sold their company for 1.2 billion dollars to the multinational PepsiCo, which is responsible for promoting the brand worldwide.

The number of restaurants multiplied during the 1980s, consolidating Pizza Hut as the world leader in its market. In 1986 the local number 5000 was inaugurated and in 1990 the first one was opened in Moscow, when it was still part of the Soviet Union. However, its good progress was truncated in the 1990s by the growing competition.

Since the benefits in the beverage division were far superior to that of restaurants, PepsiCo separated them and created in 1997 a subsidiary company, Tricon Restaurants (now Yum! Brands), which grouped all its restaurants (Pizza Hut, KFC and Taco Bell).

Over time, he has diversified his business and created new restaurant brands: Pizza Hut Italian Bistro, specializing in Italian-style pizzas and dishes, and Wingstreet, which sells chicken wings among other specialties. He has also developed home delivery systems online in most countries where he is present.

The company announced a brand change that began on November 19, 2014. The brand change was an effort to increase sales, which fell in the previous two years. The menu was expanded to introduce various elements such as crust flavors and eleven new empanada specialties. Work uniforms for employees are also updated.

The star product is pizza in its different varieties. The most common ("pan pizza") is Chicago-style, with more cheese and thicker than Italian-style ones. There is also classic, thin dough, the stuffed cheese on the edges (rolling pizza) and the one that replaces the edge with cheese bites (cheesy pops). The offer depends on each country and the client can choose the available ingredients that he wishes. Limited edition products are usually launched and those with the least sales have ceased to be manufactured.

In addition to pizzas, other meals are offered. In the section you can choose starters garlic bread, chicken wings, fingers of mozzarella, sandwiches and desserts. Since 2008, restaurants in the United States and Panama also sell Italian pasta. There are also special promotions that combine pizza with starters.

The vast majority of Pizza Hut franchises sell PepsiCo drinks, except in Costa Rica, Chile and Peru where Coca Cola is sold (although Pepsi was sold in the latter country until 2012).

Stuffed crust pizza was introduced on March 26, 1995. By the end of the year it had become one of its most popular lines. Pizza Hut developed a pizza for use as food in space, which was delivered to the International Space Station in 2001. It was vacuum sealed and measures about 6 inches (15 cm) in diameter to fit in the oven of the station. It was launched in a Soyuz and eaten by Yuri Usachov in orbit.

Pizza Hut began advertising nationwide in 1965 with the Putt Putt to the Pizza Hut campaign. His first logo featured his former pet, Pete, with the word "Pizza" and "Hut" being held in each hand.

In 1967 the traditional logo of the red roof with the name below was adopted, it was based on the facade of the restaurants that Richard D. Burke made years ago.

The design was modernized in 1999 to the current one, with a new typeface and a modification on the red roof. Pizza Hut introduced a new logo similar to the previous one, but a different font was introduced. In addition, the "i" in "Pizza" had a green dot placed on it, and a yellow line is placed below the word mark. Although this renewed logo was introduced, the "red roof" design is no longer used over the years. Some renovated restaurants still retain the shape of the previous design, but the newer ones have exterior wood paneling and modernized interior features, only some renovated restaurants carry the "red roof" icon, updating only the logo. As of 2010, this logo is currently being used as a secondary logo.

In 2008 the logo is renewed, the "red roof" is enclosed in a vinotinto color box, while the restaurant name (located below or to the side) is enclosed in a darker vinotinto rectangle. This logo is used in some countries of South America, and is also used in Hong Kong, Israel and Southeast Asia.

In mid- 2009 there was a change of name to "The Hut", in which the reference to pizzas was eliminated to increase sales in other products. This logo was used only in a number of prototype locations in Illinois. However, that new design was a failure and was quickly discarded after criticism. In February 2010, the red roof was given a shiny appearance and the text was modified. This logo is still used in some places.

In February 2014, the yellow stripe at the bottom of the word mark and the green dot on the "i" in "Pizza" were removed from the logo design and the word mark was lowered further from the roof symbol Red. This version is similar to the 1968 logo, and is still used in some countries.

In November 2014, Pizza Hut announced a major change in its menu and the appearance of its restaurants. They also announced a new logo and a new box design, which was launched on November 19 of that month. The logo consists of the blank February 2014 logo, placed in a red circle design similar to a brushstroke. However, in the boxes of this logo you only have the white roof inside the red circle. The latter logo was used in some countries in Asia in 2016 and in South America in 2017.

Since June 2019 re-using the 1967 logo in advertising and marketing, while the 2014 logo will still be used only in restaurants.

Pizza Hut has appeared in films such as Back to the Future Part II (1989) or Demolition Man (1993, only in the European version) and was one of the first to advertise by location in a console video game: Teenage Mutant Ninja Turtles II: The Arcade Game, which in its version of NES altered the graphics with references to the brand and included a coupon for a free pizza. As for sports, he sponsored the Fulham Football Club of the English Premier League in the 2001-02 season.

In 1997, the former president of the Soviet Union, Mikhail Gorbachev, appeared with his granddaughter Anastasia in an international advertisement for the pizzeria. The money he was paid served to maintain the foundation that bears his name. His appearance was not without controversy, as some people considered that it degraded the image of the statesman and that of Russia. Other celebrities who have appeared in ads have been Donald Trump, Ringo Starr, Rush Limbaugh, Jessica Simpson and The Muppets.

Also in 1999, the Crazy Taxi game for Sega Dreamcast featured Pizza Hut as one of the locations that players were able to drive to take customers. However, in the relaunch of the 2010 game for Xbox Live and PlayStation Network, the entire product placement, including Pizza Hut locations were removed.

Unlike other fast food franchises, Pizza Hut does not have a corporate pet, although it did use it in different promotions of the 1990s. Between 1993 and 1997, a series of advertisements, Pizza Head Show, aimed at children and starring a slice of pizza was made for the United States. And in Australia the dealer Dougie, who played the actor Diarmid Heidenreich, was used.

Pizza Hut has more than 15,000 restaurants (almost all franchised), which makes it the largest pizza chain in the world.

The headquarters are located in Plano, Texas (United States). The first store opened in Wichita, Kansas the 15 of June of 1958 and today still stands, although it is no longer in its original location. In 1984 he was transferred to Wichita State University, where the founding brothers studied.

In the United States alone, it has more than 7,757 points of sale, ranging from simple restaurants to take-away food stalls. Abroad has 6,350 establishments, spread across 100 countries and territories.

In 1968 the first one opened in Canada. A year later he arrived in Mexico in 1969. In 1973 there was a turning point for the expansion policy, with the opening of premises in Japan and the United Kingdom.

In India and China it is not present in the Pizza Hut division, but in the Yum division! India and Yum! China respectively.

Pizza Hut opened in Argentina in 1983 but retired some time later, returned in 1990 but retired in 1998 due to little sales success.

In Uruguay during the 90s, a store opened in Montevideo, but as in Argentina, it had little success and they had to leave.

In the United Kingdom, Pizza Hut was criticized in October 2007 for the high salt content in their meals, some of which were found to contain more than double the recommended daily amount of salt for an adult, since the meats of Pizza ingredients (ham, sausage, bacon, etc.) are salty and fatty. To meet the 2010 Food Safety Agency's goal of salt levels in food, between 2008 and 2010 the company has eliminated more than 15% of salt through its menu.

"Pizza Hut" is at the 2nd Position in this list. 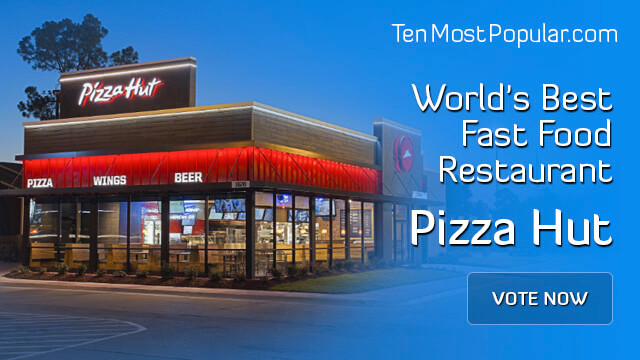