McDonald's Corporation is the world's largest chain of hamburger and fast food restaurants.

The company's headquarters - called McDonald's Plaza - is located in Oak Brook, Illinois, a suburb of Chicago in the United States. This is also home to Hamburger University, McDonald's training center.

The company was expanded by businessman Ray Kroc after taking over the rights in 1955 from a small hamburger chain led by Richard and Maurice McDonald.

A McDonald's restaurant is managed by a franchisee, a branch, or the company itself. The company's income comes from the rent, copyrights and fees paid by the franchisees, and the sales in self-operated restaurants.

The total number of orders at McDonald's amounts to 69 million a day, spread over more than 37,000 locations in 120 countries.

The first McDonald's restaurant opened in 1940 in San Bernardino (California) by brothers Dick and Mac McDonald, sons of Irish immigrants. The McDonald's restaurant became more famous after 1948, when the brothers launched their innovative "Speedee Service System" developed an 'assembly line' production system for hamburgers, without table service. Ray Kroc, a sales traveler and seller of milkshake machines, suggested opening up more business. This created the McDonald's group. The formula quality, service, crystal clearness & value for money (KSK & W) that was conceived at the time, is still used today in all restaurants worldwide. The first McDonald's restaurant in Europe was opened in Zaandam, the Netherlands in 1971. Franchisee was Albert Heijn at the time.

The openings of the first branches in Russia and the People's Republic of China caused a real rush. American fast food was considered cool, trendy, hip and a sign of prosperity.

In certain cases, McDonald's also meets special wishes with regard to food. For example, some McDonalds in Israel are completely kosher and some McDonalds also take Islamic dietary rules (halal and haram) into account. Another difference between countries is that alcohol is sold in some countries, such as Germany, and not in the Netherlands, for example.

Well-known products include the Big Mac and hamburgers with fries. A special menu is available for children: the Happy Meal. Nowadays you can also get salads.

In the Netherlands and Belgium you can get the special yellow fries sauce. In most other countries, standard ketchup is served with fries or ordinary mayonnaise if requested. In addition, it is also possible to order ketchup or curry with the fries.

An addition that many restaurants know is the so-called McDrive. This is a payment and pick-up option at a McDonald's restaurant where you can order products without having to leave the car, after which the meal/snack can be taken in the car. The concept is called drive-thru in America. These branches usually have a terrace, in addition to the possibility to stay in the car and the possibility to sit inside.

At the beginning of November 2019, the British Steve Easterbrook who led the company will be replaced since 2015 by the American director Chris Kempczinski.

Branches in the Netherlands

The McDrives are generally located in a municipality with at least 35,000 inhabitants, on a provincial or national highway or at another visible location. In larger cities (from 100,000 inhabitants) there are often one or more city issues in the hospitality or shopping center. Some city affairs have a terrace just like the McDrives in the summer. This not only depends on the available space but also on obtaining a permit from the municipality.

The first McDrive in the Netherlands was opened on September 25, 1987 in Huis ter Heide.

A product that is only sold in the Netherlands, Belgium and on Curaçao is the McKroket. This is a hamburger bun with a croquette slice that is derived from the Dutch snack bar success: the croquette. The McKroket was already on the menu when McDonald's opened its first restaurant in the Netherlands, just like apple sauce and chicken leg. However, the product disappeared from the range after a few years. The re-introduction of the McKroket took place in 1999. It became a sales success that made the company decide to permanently include this burger in its range.

McDonald's is a franchise organization. This means that a large part of the branches are independent, but they can use the McDonald's formula for payment to the parent company. Some restaurants are owned by McDonald's itself. This means that they receive and are allowed to use the recipes, but there are also obligations with regard to, for example, the house style, products and policies to be implemented. The business of McDonald's is extensively discussed in the book McSucces - The McMethode revealed that the Dutch journalist Ubel Zuiderveld published in 2012.

McDonald's is constantly under fire from critics such as the environmental movement, trade unions and public health experts. They accuse McDonald's of exploiting unskilled workers, ecological damage, the sale of unhealthy, non-nutritious food, the production of packaging waste, exploitative advertising (especially aimed at children) and co-indebtedness to the suffering and exploitation of animals.

In 1990, activists from a small group, known as London Greenpeace (no connection with the international group Greenpeace), distributed leaflets entitled What's wrong with McDonald's?, with criticism of the environmental, health and labor record. The company approached the group demanding that they stop and apologize, and when two of the activists refused to withdraw, she prosecuted them for libel in one of the longest cases in British civil law. A documentary about the McLibel Trial has been shown in different countries.

A famous lawsuit in 1994 in the US was the so-called Liebeck v. McDonald's Restaurants lawsuit in which 79-year-old Albuquerque, New Mexico, resident Stella Liebeck initially received $2.7 million in damages after she had sustained third-degree burns after spilling a third-degree burn sultry cup of McDonald's coffee by itself. The price was later reduced to $640,000. Her lawyers were able to prove in the trial that McDonald's willingly made the coffee at such high temperatures, even though other guests had previously been burned by hot coffee.

In 2002, vegetarian groups, mostly Hindus and Buddhists, successfully filed a complaint against McDonald's for misrepresenting their fries as vegetarian, while the beef broth contained them. Then 10 million dollars was paid out.

In 2004, Morgan Spurlock's documentary Super Size Me provided negative publicity for McDonald's, suggesting that eating McDonald's contributed greatly to the increase in obesity in the United States. The filmmaker ate and drank three times a day at McDonald's for a month. He gained 11.1 kilos, became depressed, got a chronic headache and lost interest in sex. Spurlock limited its intake to the Medium size menus as much as possible and had to take a so-called Super Size Menu if the sales employee offered it to him. A journalist from the Algemeen Dagbladwho also went to McDonald's for a month in the Netherlands, opted for low-calorie meals and lost six kilos. However, he only acknowledged that he had achieved this result under the strict supervision of a dietitian. The American John Cisna repeated the experiment for 90 days in 2013 and lost 17 kilos. Unlike Spurlock, he did pay attention to his caloric intake and started exercising.

In 2007, the FNV reported that McDonald's uses child labor to make the toys of the Happy Meal. Children should work more than 16 hours a day for a wage from which they cannot yet buy a McDonald's menu. This message was confirmed by the HKCTU, the Hong Kong Confederation of Trade Unions, a sister organization of the FNV.

In April 2007, in Perth, Western Australia, McDonald's pleaded five charges against the employment of children under the age of 15 in one of his restaurants and was fined $8,000.

On 26 January 2010, the judge ruled on a dismissal for adding a slice of cheese to a hamburger for a McDonald's colleague in early March 2009. This was against McDonald's house rules. The judge ruled the dismissal as unjustified and too heavy. The woman cannot start working at McDonald's again but did receive a five-month salary.

McDonald's is also under attack from animal rights organization PETA, which, just like at KFC, claims that McDonald's employees are very cruel to chickens.

In December 2010, it appeared that hackers had stolen McDonald's data about customers, such as name, address, dates of birth and telephone numbers.

In April 2014 it was announced that McDonald's in Europe will start using chicken meat that has been produced using genetically modified animal feed. Greenpeace claims that McDonald's saves less than one Eurocent for every chicken burger and takes a path that is not desired by its customers.

At the end of 2018, a study was published by London Metropolitan University showing that bacteria were found on McDonalds' self-service screens, which normally only occur in intestinal tracts or faeces. A total of eight restaurants were examined in London and Birmingham, and more than 10 potentially harmful germs were found, including an antibiotic- resistant bacterium.

"McDonald's" is at the 1st Position in this list. 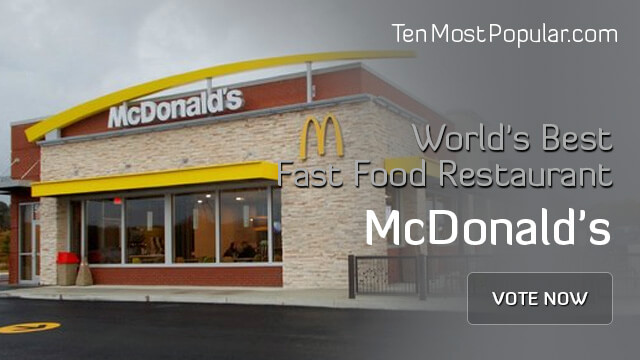