KFC Corporation (founded and also known as: Kentucky Fried Chicken) is a fast food chain that sells chicken products and works according to the franchise model.

KFC Corporation is based in Louisville, Kentucky, United States, and the franchise company was founded by Harland Sanders, better known as Colonel Sanders in 1952 under the name Kentucky Fried Chicken. Sanders, who died in 1980, is still part of the company's image 30 years later, which uses Colonel Sanders images in logos and advertisements. The company has since become part of Yum! Brands, that includes KFC, Pizza Hut and Taco Bell the largest fast food company in the world. KFC is the largest fried chicken chain in the world, and also one of the largest fast food chains.

In 1930, Sanders served his first chicken dishes at a gas station in North Corbin, Kentucky. The restaurant was then called Sanders Court & Café. Because of his successful formula and contribution to the culinary image of the state, the then governor of the state honored him with the honorary title Colonel Kentucky. In the years that followed, Sanders increased the number of seats in his restaurant to 142, and bought a motel on the other side of the street. In the meantime, he also worked on the recipe, with the main objective of shortening the preparation time, which then took 30 minutes. The recipe that he developed in 1940 eventually became known as Original Recipe. With that product he then traveled through the country looking for restaurant owners to take it from him. The first to show interest was Peter Harman, in South Salt Lake, Utah, and together they opened the first Kentucky Fried Chicken establishment in 1952. After this it went fast and in the early 1960s there were 600 branches in the US.

In 1964, Sanders sold his shares for $2 million. The chain has since been resold three times: to Heublein in 1971, to RJ Reynolds in 1982 and, most recently to PepsiCo in 1986, which was part of the Tricon Global Restaurants division, which was divested in 1997 and is now renamed in Yum! Brands.

KFC in the world

After the first successes in the US, the company has expanded and, in 2013, it manages around 16,000 branches in 100 countries. In addition to foreign locations in the Netherlands, Curaçao and Suriname, there are KFCs in Mozambique, South Africa, Armenia, Canada, Mexico, Puerto Rico, Germany, France, Kosovo, Ireland, Poland, Portugal, Romania, Spain, United Kingdom, China, Indonesia, Japan, Turkey, Vietnam, South Korea, Australia, and New Zealand.

KFC announced in December 2018 that it will establish branches in Belgium. The first restaurant was opened on 5 June 2019 in the North Station of Brussels. 150 branches would be established in the long term.

KFC in the Netherlands

In 1996, KFC was, in its own words, the first fast-food restaurant that opened its doors in Suriname.

KFC sells chicken products that are prepared according to a special company recipe. Part of the preparation process is that frying takes place under pressure, which considerably shortens the preparation time. In addition to the main product, chicken with a crispy crust, KFC also serves other dishes such as salads, chicken burgers, fries, wraps, various non-alcoholic drinks and desserts. In addition, there is a separate range of products available in different countries, such as kebabs, sandwiches, tortillas and cookies. In addition, beef, pork and fish products are also tried out at some locations in the 21st century.

KFC positions itself as most fast food restaurants with a standard interior. The colors red and white dominate at KFC. There is a counter with a row of cash registers where visitors place their order and usually receive it within a few minutes. The dining room, often spread over several floors, is brightly lit and equipped with TV screens that run closed TV programming (these are often video clips of songs and information and advertisements from KFC are shown).

Within Yum! Brands KFC is one of the most important brands and the formula is still being worked on. For example, product development is not only being done, but there are also experiments with spin-offs from KFC with a slightly different range, and the last two decades the name has slowly but surely changed worldwide from Kentucky Fried Chicken to KFC. In addition, Yum! Brands has now also opened KFC combi-restaurants with one or more of the other formulas in the chain, such as Taco Bell, Pizza Hut, etc. In no time, in 2013, the use of the Colonel in the logo, and the red and white colors.

With an order one usually gets a number of refreshment wipes with which one can clean his hands after eating the fatty chicken.

The company has been under fire for years from animal rights organization PETA, which claims that suppliers of KFC treat chickens unethically, including by keeping them in too small spaces, treating them unhygienically, keeping dying animals alive with antibiotics, and cook them alive. As proof, PETA points to various videos with images from chicken farms of KFC suppliers. These videos can be viewed on PETA's Kentucky Fried Cruelty website (see external links)), the site on which Colonel Sanders is seen as a bloodthirsty chicken dealer. In those videos you can see chickens being beaten up, pulled apart, and thrown against the wall. In the logo of the site you can see Sanders (with devil horns and malicious looking) with a tortured chicken in his hand, and there are also many pictures where Sanders tortures chickens. Here you can also see blood and bruises.

In January 2003, KFC denied PETA's charges. In March of the same year, KFC announced that it wanted to adopt a PETA proposal that should lead to an improvement in the living conditions of chickens. However, PETA claims that nothing has changed despite this commitment. On a Dutch-language poster, Kentucky Fried Chicken said it was strictly necessary to ensure that the chickens were properly killed, so PETA thinks otherwise.

In late 2007, PETA made a game called Super Chick Sisters, based on Super Mario Bros. In this game you can choose to play as a Nugget or Chickette. These two chicks also have the hats of Mario and Luigi, that of Nugget is red with an "N" in place of an "M", and that of Chickette is light green with a "C" in place of an "L". The aim of the game is to have Pamela Anderson, who is a princess in this game and probably has a role just like Princess Peach, released from KFC's founder Colonel Sanders, who is the main villain and a chicken martyr in this game. If one has to fight him at the end, he is wearing a Bowser mask. The Mario characters Mario, Luigi and Toad also feature in this game. In 2010 a follow-up was made with the name New Super Chick Sisters, where Ronald McDonald is the main villain. With these games, PETA hopes that children will become aware of the living conditions of the animals being processed in the fast food industry, and that they will start thinking about eating meat in general, and at fast food chains such as KFC in particular.

KFC has used various slogans over time, including:

"KFC" is at the 6th Position in this list. 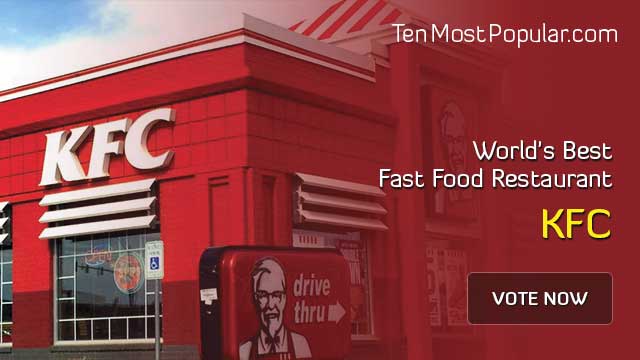