Dunkin', formerly Dunkin' Donuts, is a multinational chain of cafeteria type franchises specializing in donuts (also known as donuts or simply donuts), founded by William Rosenberg, in 1950 in Quincy, Massachusetts, United States. Dunkin' Donuts can be translated as "Soaking Donuts", since Dunkin' is the contraction of the English verb "to dunk" (dunking), which means soaking.

The parent company of the chain is currently called Dunkin' Brands, which also owns the ice cream firm Baskin Robbins.

The main offer of coffee shops of this brand is based on American-style coffee and donuts, which are offered in a multitude of flavors and with brightly colored toppings. Over time, the chain expanded its range of products, until it also offered slushies, ice cream, soft drinks, tea, sandwiches, juices or snacks.

The Dunkin' Donuts brand strategy is focused mainly on the youth audience, using a thick and kind-looking typeface and the colors pink, orange and brown. Its business model is similar to that of some fast food chains such as McDonald's or Burger King, giving an almost instantaneous service, without waiters, and in individual trays or in take-away containers.

The direct competition of Dunkin Donuts in most countries is usually the Starbucks Coffee coffee chain.

In Spain, the company uses the Dunkin' Coffee brand since 2007 because the term "donuts" is registered exclusively by another company.

In 1948, William Rosenberg and Stephen So opened the first restaurant, Open Kettle, in Quincy, Massachusetts before renaming it to Dunkin' Donuts in 1950.

In 2004, the company's headquarters was moved to Canton. The following year, Stan Frankenthaler was nominated four times at the James Beard Foundation Award as the first Executive Chef/Director of Culinary Development.

In 2008, Dunkin' Donuts opened its first "green" store in St. Petersburg, Florida. The restaurant is is Leadership in Energy and Environmental Design (Leadership in Energy and Environmental Design, LEED) and includes programs such as vermicomposting (who "will eat the waste produced by the store, such as coffee grounds and converts paper products into compost for local farms and gardens"), efficient water pipes, and the use of well water instead of drinking water for all irrigation. On December 10, 2008, Nigel Travis was appointed CEO of Dunkin' Brands. He also assumed the role of president of Dunkin' Donuts in late 2009.

In 2010, Dunkin' Donuts' worldwide system sales were $6 billion. In 2011, Dunkin' Donuts won first place in Brand Keys' customer loyalty ranking for coffee for the fifth year in a row.

In April 2012, Dunkin' Donuts moved its beverage products to The Coca-Cola Company having served PepsiCo products in response to similar rivals with PepsiCo products expanding in the United States in 2011. The only exception was Gatorade of PepsiCo. PepsiCo. Locations in Canada were not affected by the change, although the Montreal Eaton Center store in Montreal serves Nestea along with most of the company's products.

Despite having hundreds of stores across the country, Dunkin' Donuts and its market share virtually disappeared from Canada at the turn of the century. In the 1990s until the late 2000s, the chain began to disappear from all parts of Canada, with its last foot in the province of Quebec. However, its decline is most evident in Quebec, where the chain has already had up to 210 restaurants, but in mid-2017 there were only three, the last franchisees in the country.

Only one restaurant in Canada, located in Verdun, had facilities to make fresh donuts on site, the other two, Place Versailles in Montreal, and Mail Montenac in Beloeil, were simply food stalls in the mall, depending on the delivery of the restaurant's bakery products to Verdun.

In 2016, a judge ordered Dunkin' Donuts to pay C $18 million in damages to some twenty-one former Quebec franchisees for failing to equip them to compete with the Tim Hortons tide.

In September 2018, after 57 years of operation in Canada, Dunkin' Donuts has ceased operations in the country after refusing to renew its franchise license to the few remaining stores. The last three Canadian restaurants were closed or renamed as independent restaurants at the end of 2018, thus ending the presence of Dunkin' Donuts in the country.

Its subsidiary, Baskin-Robbins, has restaurants across Canada.

Dunkin' Donuts, along with Baskin-Robbins, is co-owned by Dunkin' Brands Inc. (previously known as Allied Domecq Quick Restaurants). Dunkin' Brands also owned the Togo franchise, but sold it at the end of 2007 to a private equity company.

In 2005 Allied Domecq became the property of the French beverage company Pernod Ricard, reaching an agreement to sell the chains to a consortium of three private equity firms, Bain Capital Partners, Carlyle Group and Thomas H. Lee Partners. In 2006 Dunkin' Brands was established.

In 2018 the name change to Dunkin' is announced, thus eliminating the word donuts from its name.

The company's biggest competitors include Krispy Kreme and Starbucks, and small locally owned donut shops. In Canada and parts of the northern United States, Tim Hortons is a major competitor. In Colombia, Donut Factory had been its local rival, and Dunkin' tailored its donut selection to local tastes. Mister Donut had been its largest competitor in the United States before the company was bought by Dunkin' Donuts parent company. The Mister Donut stores have been renamed as Dunkin' Donuts. Dunkin controls trademark rights for Mister Donut through a number of older and new USPTO trademark registrations.

The company has been present in Chile since March 1984, with its first stores located in Paseo Ahumada (premises later moved to its current location in Paseo Estado), as well as in several Almac supermarkets.

In Colombia, the idea was born in December 1981 when upon his return from the United States, businessman Miguel Merino told Jorge Röthlisberger the possibility of having a license for Dunkin Donuts Colombia, an industry he had been able to observe during a year of permanence in That country. In April 1982, the company formed by the Walter Röthlisberger & Co. Ltda. Group, the Merino Group and the Maldonado Group: Donucol Limitada was formed and in September the first store was opened in Chapinero. 30 years later the company has a presence in Bogotá, Chía, Soacha, Medellín, Rionegro, Cali, Palmira, Ibagué, Manizales, Armenia (Quindío), Pereira and Barranquilla. There was a store in the Bocagrande sector in Cartagena. Under an agreement signed in July 2012, 70 more points will be opened in the next 10 years and menu options inspired by trends in local flavors such as Manjar Blanco, Veleño and Papayuela donuts will be strengthened.

In Spain, the "Donuts" brand was previously registered by the Panrico company, so the company was born as a joint venture between Allied Domecq and Panrico (Allied had 50% of the baker at that time) in order to use the "Dunkin' Donuts" brand. In 2006, the sale of Dunkin' Donuts and Panrico to different entities (by Pernod-Ricard) meant the end of the link, so the chain was forced to modify its trademark, becoming called "Dunkin' Coffee".

In Peru, on December 10, 1996, he opened the first store on Av. Larco in the district of Miraflores. In 2007, Dunkin' Donuts already has 49 points of sale in Lima and 17 of them are stores. Expansion plans include the opening of 25 new stores and the sale of Coolatta, a chicha made from Peruvian purple corn.

The chain operated briefly in Argentina, closing in 1998 due to lack of sales. Since then, a return to the country of Dunkin' Donuts has been sought. He also had a presence in Bolivia and Venezuela.

In the early 1990s, Dunkin' Donuts tried to reach the European market without much success, only by maintaining functions in Germany and Spain. In recent years he returned to the United Kingdom and Norway.

Dunkin' Donuts appeared in Japan in 1970, however the onslaught of his rival Mister Donut meant a gradual drop in sales. When both companies became part of Allied Lyons in 1990, all Dunkin' Donuts stores in Japan became Mister Donut (contrary to what happened in North America).

Dunkin' Donuts has over 1,000 varieties of threads, along with other products.

In Brazil, Dunkin' Donuts opened its first headquarters in 1980, but eventually closed the network and passed the points to Café Donuts. In 2014, the network announced the return to the country through the partnership with the OLH group and intends to open 65 stores in five years. But at this first moment, the operation will be restricted to the Midwest, the Federal District and Goiás, region where the group has been operating in the fast food market for 10 years.

"Dunkin' Donuts" is at the 5th Position in this list. 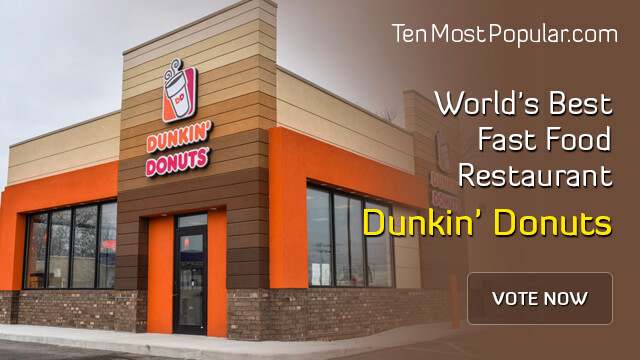