Domino's Pizza is an American restaurant chain that specializes in pizzas. The company was founded in 1960 with one restaurant. The two hundredth branch was opened in 1978. In 2006 the company had more than 8,000 branches. Currently Domino's has branches in more than 60 countries and in all 50 US states - more than 10,000 in total.

The company was founded in 1960 by Tom Monaghan, who five years before had opened his first pizzeria in Ypsilanti (Michigan). It currently has more than 14,500 establishments (more than 5000 in the United States alone, the second largest in the country behind Pizza Hut) and is established in 89 countries and territories. Since 1998 its largest shareholder is the private equity fund Bain Capital.

The origins of the current Domino's go back to the October of June of 1960, when Tom Monaghan and his brother James bought the pizzeria "DomiNick's" with an initial investment of $900. The place was located in Ypsilanti, near the University of Eastern Michigan, and Tom's idea was to sell pizza delivery to students at nearby residences. That experience was not going as planned, so James sold half of the business to his brother for the Volkswagen Sedan they used for the deals.

In spite of everything, Tom Monaghan remained in charge of the restaurant and made important decisions for his future, such as reducing the menu of products and establishing a free home delivery. After acquiring two more restaurants in Ypsilanti and Ann Arbor from a local businessman, in 1965 he renamed his three stores as "Domino's Pizza". The reason that motivated that change was that the former owner of DomiNick's wanted to recover the brand, so Tom looked for an alternative name that appeared below in the yellow pages. The logo is a domino that symbolizes the three original stores.

Shortly after Domino's was founded, Monaghan focused on expanding its business through franchises. In July 1967, the first franchised store in East Lansing was opened, and from that moment the figure kept increasing. Among other measures, the chain established industrial machinery to make pizzas more quickly, ordered thick boxes to prevent the product from being crushed, and introduced a novel delivery policy: since 1973 a free pizza was guaranteed if the Home delivery took more than 30 minutes.

Despite numerous setbacks, Monaghan managed to expand Domino's franchises through former employees and a new franchisee training program, The College of Pizzarology. By the end of the 1970s 280 stores had been opened, in 1981 they reached 500, and in 1983 the first two pizzerias were opened outside the US. UU., One in Winnipeg (Canada) and the other in Queensland (Australia), to exceed the number of 1,000 restaurants.

In 1988, the company opened its first establishment in a Spanish-speaking country in Bogotá (Colombia). Later it spread to Mexico and Guatemala (1989), Venezuela (1992), Dominican Republic (1993), Ecuador and Peru (1995). They were not established in Spain until 2008, after Grupo Zena left its Pizza Hut franchisee in favor of Domino's.

Tom Monaghan sold 93% of the company in 1998 to the Bain Capital venture capital fund for $1 billion. By then, the matrix had more than 7,000 establishments worldwide.

In 2004, Domino's began trading on the New York Stock Exchange. Currently the company has renewed its menu to include other fast food dishes such as sausages or pasta.

The star product is pizza in its different varieties. Domino's was characterized by using a common (classic) American-style dough, with more cheese and thickness than Italian-style ones. In 1989 he introduced the thick dough pizza (pizza bread) and since then the variety has increased, including thin dough, cheese on the edges, crunchy dough stuffed with cream cheese (double decker) and calzone among others. The offer depends on each country: in Spain, the masses with stuffed border include a variety with goat cheese. And in Israel a pizza was tried for the first timeVegan with cheese made from soy milk.

The doughs are prepared and are kneaded in the restaurant itself on a tray. After spreading the sauces and ingredients, the pizza is placed in an automatic oven with the scheduled time for proper cooking. This industrial method, different from the preparation of a traditional pizza, has allowed Domino's franchises to expand rapidly.

In addition to pizzas, other products are offered. In the entree section you can choose garlic bread, chicken wings, mozzarella fingers and desserts.

Most Domino's Pizza franchises in the United States sell Coca-Cola drinks, something that does not happen in every country.

Domino's has stores in more than 60 countries. In most cases Domino's has master franchise agreements with one company per country.

Only three companies have master franchise agreements that include more than one country:

In 1973, Domino's Pizza first introduced a nationwide guarantee for customers: if they were not delivered pizza at home in less than 30 minutes, they would receive it for free. In the late 1980s, the measure was replaced by a three-dollar discount and offer coupons. Although this technique was intended to guarantee the rapidity of the distribution as an added value of the company, Tom Monaghan had to do without it in 1993 in the face of accusations of reckless driving by some of its distributors. In many countries it has remained a hallmark.

Pizza delivery was originally done in cars, although most countries use motorcycles. Since then the company has developed projects to accelerate the distribution, such as unmanned aerial vehicles, robots (DRU), and even a Chevrolet car, Domino's DXP, which incorporates an oven to keep the pizzas warm.

In the 1980s, Domino's Pizza created a pet for the United States television commercials. "The Noid", a wicked and crazy red elf who wanted to spoil pizzas without success, was made by plasticine animation by Will Vinton's studio. Although this pet is no longer active, he starred in the video game Yo! Noid (1990) and has been parodied in series as Family Guy.

Another hallmark has been sponsorship of motor sports. In 1990 he supported the Doug Shierson Racing team in the United States Car Championship, so the pilot Arie Luyendyk was proclaimed winner of the 500 Indianapolis Miles with a car with the colors of Domino's. Between 2003 and 2006 was one of the official sponsors of NASCAR, and later hosted to David Reutimann (Michael Waltrip Racing) in the NASCAR Cup of 2007.

Domino's Pizza has more than 5,700 establishments in 73 countries, which makes it the second largest chain of pizzerias worldwide behind Pizza Hut. If Domino's restaurants that legally belong to other franchising companies are added, the figure amounts to 11,000 stores.

The headquarters is in Ann Arbor, Michigan (United States). The first store was Ypsilanti Dominick's pizzeria that the Monaghan brothers bought on June 10, 1960, the official foundation date. Since then, only in the US More than 2,800 stores have been opened (5,076 if franchisees are added).

There are three companies that have acquired major franchise agreements worldwide:

On the door of the underground former launch center of the LGM-30 Minuteman in Minuteman Missile National Historic Site in South Dakota is a parody of Domino's pizza box.

Domino's introduced a new logo in 2012. What is striking is that the word "pizza" has been omitted. Domino's did this because it sells more than just pizzas. Domino's does not want to confuse consumers by also placing 'pizza' under the new logo. In the Netherlands and Belgium the new logo is applied in new stores and on the website.

Domino's Pizza had to face a lawsuit in 1975 against the sugar company Amstar Corporation, maker of Domino sugar, for alleged violation of trademark rights. Although the lawsuit lasted five years and alternative names such as Pizza Dispatch were considered, a court in New Orleans finally ruled in favor of the pizzeria and it was able to keep its mark.

In February 2015, Domino's Pizza announced the temporary closure of all its restaurants in Peru, after knowing that some stores had unhealthy problems. The employees themselves came to report the situation. The situation was not resolved until August 2016, with the reopening of a branch in the District of Miraflores.

"Domino's Pizza" is at the 4th Position in this list. 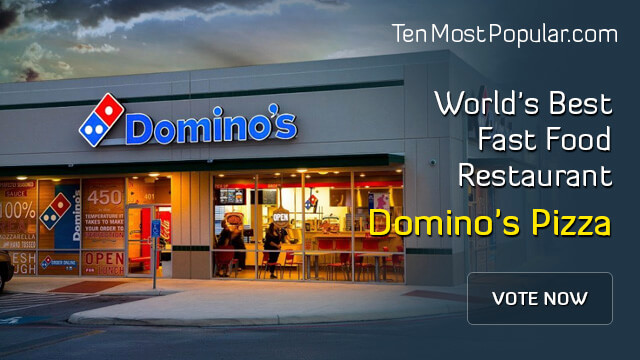