Tata Motors Limited (in Hindi: टाटा मोटर्स), formerly known as TELCO (TATA Engineering and Locomotive Company), is India's largest manufacturer of personal and commercial vehicles. It is part of the Tata Group and its head office is in Mumbai, in the state of Maharashtra.

Tata Motors Limited is an Indian car brand. From 2008 it is also the owner of Jaguar and Land Rover.

Tata Motors Limited was born in 1945 under the name of TELCO (TATA Engineering and Locomotive Company). It is India's largest company manufacturing passenger cars and commercial vehicles. It occupies the 20th place in the ranking of commercial vehicle manufacturers in the world (2006 data). It is part of the Tata Group industrial group.

Its products include cars, motorcycles, buses, trucks, vans, construction equipment, rural equipment and military vehicles. It is currently the fifth largest automotive company in the world, being fourth in trucks and second in volume buses. This company is also listed among the top 500 companies in the world in 2016, according to the Fortune Global 500, at 226th place.

Tata Motors has its manufacturing centers on Indian soil in the cities of Jamshedpur, Pantnagar, Lucknow, Sanand, Dharwad and Pune, as well as nations such as Argentina, South Africa, Thailand and the United Kingdom. The research and development centers are located in the Indian cities of Pune, Jamshedpur, Lucknow and Dharwad, and are also present in countries such as South Korea, Spain and the United Kingdom.

Since January 17, 2017, the president of this company is Natarajan Chandrasekaran.

Tata Motors started the year 2008 with two ads. On the one hand, the purchase to Ford Motor Company of its subsidiaries Jaguar and Land Rover for an amount of about 2,300 million dollars (about 1,485 million Euros at the current exchange rate).

As part of the agreement, which includes brands, its factories and intellectual property, the multinational based in Dearborn (Michigan) is committed to contributing 600 million dollars (387 million Euros) to the pension plans of Jaguar workers and Land Rover. In addition, Ford and Tata do not expect significant changes in the templates of the two companies.

And also the intention of manufacturing a cheap car, the Tata Nano, at a price of US $2,500, which in India costs about 1,700 Euros, makes it possible to see its arrival in other markets, despite its price (which is around 3,000 Euros), its export will be delayed indefinitely, given the constant complaints of poor quality of some of its finished products, which have caused them to not even be released at the time of their departure from the dealership.

In 2004 it bought the South Korean Daewoo truck division. In 2005 acquired 21% stake in Hispano Carrocera SA Tata Motors acquired in March 2008 the companies Jaguar and Land Rover, which previously belonged to the American company Ford.

Below are some of the vehicle models that are manufactured by Tata Motors.

Tata Motors was founded in 1945 and is part of the Tata Group. The history of the Tata Group goes back to 1868. Until 1961 the vehicles were only sold in India, but nowadays it is active worldwide. The company employs nearly 80,000 people, of which just over half in India. More than a million vehicles are sold each year and the turnover is more than US $40 billion.

It sells a wide range of vehicles, including trucks, vans, buses, military vehicles and passenger cars in the cheap and luxury segment. They are sold under the brand names: Tata Motors, Tata Daewoo, Jaguar and Land Rover. In the broken financial year 2016-2017 1.1 million vehicles were sold of which 0.3 million passenger cars. Jaguar and Land Rover together sold 0.6 million copies.

The Tata brand, also known as Tata-Telco, is mainly sold in Europe as an off-road car brand. The brand is particularly popular in the home country of India. In 2008, at the Auto Expo in New Delhi, Tata Motors showed the largest car fair in India, the new Tata Nano and also the second generation Tata Indica and the Sumo Grande, the successor to the Sumo and Spacio. It holds around half of the Indian commercial vehicle market, while the market share for passenger cars is around 5%.

Tata Motors worked together with the Rover, among other things on the development of the Rover CityRover. At the end of 2007, Tata took over the Jaguar and Land Rover brands from American automotive group Ford for £ 1.3 billion. The two British companies had around 16,000 employees at the time of the acquisition. They form the premium segment of Tata and are bundled in Jaguar Land Rover. There are four production sites in the UK, in Solihull, Castle Bromwich, Halewood and an engine plant in Wolverhampton.

The Fiat group and Tata Motors had already united their sales forces on the Indian market, since it was the Tata network, reinforced by the Fiat Premier dealers, which marketed since March 2006 locally produced Fiat and Tata cars. This agreement was broken on May 2, 2012, the Italian taking over the distribution and marketing of its models on the Indian market.

This joint venture concerns the industrial part, the manufacture of vehicles, engines and transmissions (FPT - Fiat Powertrain Technologies) is already operational on a brand new Fiat India production site in Ranjangaon in the Indian state of Maharashtra. Construction of the new Fiat Palio has already started at the Ranjangaon plant.

The signed agreement made it possible to start manufacturing very quickly the new models already known in Europe, like the Fiat Grande Punto and Fiat Linea. Mechanical parts such as the renowned Fiat 1.3 liter Multijet diesel engine, the 1.2 liter FIRE and 1.4 liter MultiAir petrol engines are also manufactured there.

The factory has a specific line for a future Tata model. The Ranjangaon site is designed to produce 100,000 cars and 200,000 engines and transmissions per year at full throttle.

The global investment has reached 650 million Euros and will employ more than 4,000 employees.

"Tata Motors" is at the 4th Position in this list. 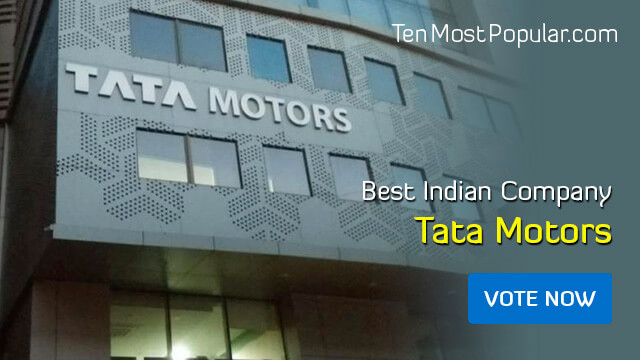