Indian Oil Corporation (IOC) (Hindi: इंडियन ऑयल कॉर्पोरेशन) is an Indian oil and gas company, the largest company in modern India. It specializes in oil refining and distribution of oil products. It was born in 1964 as a result of the merger of two companies: Indian Oil Company Ltd. and Indian Refineries Ltd.

Indian Oil Corporation Limited (Hindi: Indian Oil Corporation) is a Fortune 500 company (ranked 105th in 2009) which is the largest integrated oil refining and marketing public sector company of the Government of India. IndianOil is given the status of Maharatna by the government. It has a total share of 47% in marketing petroleum products in India and 40% in oil refining. Out of the total 19 oil refineries in India, 10 are under the ownership of Indian Oil.

IOC and its subsidiaries occupy 47% of the Indian market for petroleum products and control 40% of the refining and 67% of the country's pipeline capacities. The company owns 10 of the 20 Indian refineries with a total capacity of 60.2 million tons of oil per year.

IOC operates the largest network of car gas stations in the country (17,606 gas stations). The company also begins to develop a network of gas filling stations (gas stations). IOC supplies domestic gas to more than 47.5 million households. In addition, the company owns the Center for New Developments in Faridabad, which is engaged in the development of new technological solutions for the divisions of the company and its customers.

IndianOil is India's leading national oil company and has business interests across the entire hydrocarbon value chain - ranging from oil refining, pipeline transportation and marketing of petroleum products to crude oil and gas exploration and production, marketing of natural gas and petrochemicals. It is the leading Indian corporate company in the Fortune 'Global 500' list which was ranked 125 in the year 2010.

With a strong workforce of over 34,000, IndianOil has been helping to meet India's energy demand for over fifty years. With a corporate vision of India's energy, IndianOil achieved net sales of Rs 2,71,074 crore and a profit of Rs 10,221 crore during the year 2009-10.

At IndianOil, operations are strategically structured with business dimensions namely - oil refining, pipeline, marketing, research and development centers and business development - E&P, petrochemicals and natural gas. To achieve the next phase of growth, IndianOil is currently moving full-blown vigorously on a well-established route through vertical integration and in addition to globalization of its downstream operations - oil exploration and production (E&P) is involved in upstream and downstream in petrochemicals - and realizing their dreams in natural gas marketing and alternative energy. After setting up subsidiaries in Sri Lanka, Mauritius and the United Arab Emirates (UAE), IndianOil is also exploring new business opportunities in the energy markets of Asia and Africa.

IOC produces a wide range of products: gasoline, diesel fuel, LPG for domestic use and for use as automobile fuel, aviation fuel, lubricants, naphtha, bitumen, paraffin, kerosene, etc. Since 2010, the company plans to deal with liquefied natural gas (LNG), the re-gasification and sales of which it will produce in conjunction with GAIL.

Indian Oil supplies a wide spectrum of petroleum products including diesel, LPG, lubricants, bitumens and kerosenes etc. Indian Oil recently set up a department for the supply of LNG.

IOCL is the largest oil company from India and employed around 33,000 people in 2016.

IOCL has refineries in Panipat, Mathura, Barauni, Guwahati, Haldia, Vadodara and Digboi, which processed 47.4 million tons of crude oil in the 2007/2008 financial year. IOCL holds control shares in the Indian company CPLC, Ltd., which among other things operates refineries at Chennai.

On August 13, 2015 it is announced that the state of India wants to sell a 10% stake and has commissioned 5 banks, including Deutsche Bank, to process the transaction.

In addition, IOC owns shares in refineries in the cities of Chennai and Narimanam in the state of Tamil Nadu.

The company owns 10 of 19 Indian refineries, including the following sites:

Indian Oil and its subsidiaries hold almost half of the Indian market for petroleum products. It owns 40% of the refining capacity, 67% of the transport capacity and has a network of more than 15,000 service stations.

In the ranking of the largest world companies Fortune Global 500 for 2016, Indian oil takes 161 place. Among the world oil and gas companies it occupies the 20th place. In the Forbes 2000 ranking, compiled according to a different principle, takes the 207th place.

IOC has two major competitors in India: Bharat Petroleum and Hindustan Petroleum. Both of these companies, like IOC itself, are state-controlled. There are also two private companies on the market: Reliance Petroleum and Essar Oil.

"Indian Oil Corporation" is at the 1st Position in this list. 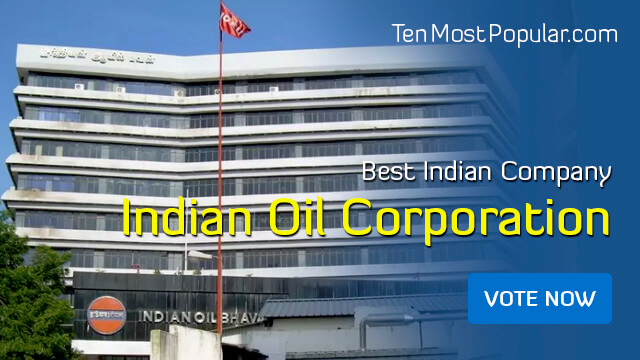