Microsoft Edge (code name "Spartan") is a web browser developed by Microsoft and included in Windows 10, Windows 10 Mobile and Xbox One. It replaces Internet Explorer as the default web browser on all device classes. According to Microsoft, it is a lightweight web browser with a layout engine that is built according to web standards. The browser contains new features, including integration with Cortana, note-taking tools and a reading mode.

Edge does not support Internet Explorer's ActiveX or Browser Helper Objects. Browser extension support was developed in March 2016 and added to preview builds and released on August 2, 2016 with the Windows 10 Anniversary Update. Extensions for Microsoft Edge are distributed via the Microsoft Store.

Edge offers, unlike Internet Explorer 11, support for the HTTP Strict Transport Security (HSTS) encryption protocol. The support for CSS3, HTML5 and JavaScript was further expanded, along with various other changes and new APIs, such as the GamePad API and Selection API.

On June 16, 2014, Microsoft released the first of a series of Developer Channel versions for Internet Explorer. This version of Internet Explorer included support for the GamePad API, improved support for WebGL, and support for WebDriver. On November 12, 2014, a new version of Internet Explorer was included in the third Windows Technical Preview. This included various improvements for ECMAScript 6 support, a faster JavaScript engine and HTTP / 2 support. In this update Trident made way for the new Edge- render engine, Edges engine of the same name. Microsoft later also announced that Edge is also the beginning for supporting HTML5.

On March 31, 2015, Microsoft released the first preview of Edge as Project Spartan version 0.10.10049 in combination with the 6th Technical Preview (Technical Preview 2 build 10049). On April 10, version 0.11.10051 in the Windows 10 Mobile Technical Preview followed, followed by version 0.11.10052 in the third Windows 10 Mobile Technical Preview. Both updates were only available for smartphones. On April 23, Microsoft released a new version, version 0.11.10061, for desktops and tablets. The new version introduced improved support for HTML5 and ECMAScript 6, some settings were added, there is a download management and Edge can handle saving PDF documents. On April 29, 2015, Microsoft released version 0.11.10074 as part of the first Insider Preview and the 8th Windows 10 preview. The 9th Windows 10 preview was released on May 20, 2015 and included version 13.10122.0 from Project Spartan and brought with it various new features. For example, it became possible to start an InPrivate session, history could be viewed, various improvements were made to the render engine, Edge was provided with a new "New tab" page, the interface was improved, it could be passwords and save forms and it is possible to pin websites to the start menu.

Version 15.10130.0 brought support for displaying websites in full screen. Major changes were also made to the hubs. Hubs can now be pinned to the side of the screen. The settings hub was subdivided into different parts to make it appear more orderly. Microsoft confirmed that version 15.10136.0, an update for Windows 10 Mobile, was the latest version with the "Project Spartan" name.

Version 19.10149.0 (with platform version 12) of Microsoft Edge was released on June 25, 2015 for smartphones and was the first time the browser used the brand name "Edge". For desktops and tablets, version 20.10158.0 followed on June 29, 2015. This version also brought the brand name to Windows and included various new features and changes to the interface including an optional home button, an optional dark interface and the option to importing favorites from other browsers. Edge was subsequently updated several times with bug fixes in versions 20.10159, 20.10162.0 and 20.10166. The localhost loopback was also reduced in the latter. Version 20.10240.16384 also contained a few performance improvements.

Microsoft Edge released version 21.10547 on September 18, 2015. This included improved support for HTML5 and CSS3 in the updated EdgeHTML 13.10547 engine, where the latest build still had EdgeHTML 12.10532. Furthermore, this new version contained improved tab management where tabs only change format after the user has left the tab bar and improvements have been made to the navigation buttons. A few new settings for proxies, among others, have also been introduced.

On October 29, 2015, Microsoft released both version 25.10576 and version 25.10581 for desktop and mobile respectively. The desktop version of Edge was provided with some minor updates to the settings hub, while the mobile version emphasized stability. On November 5, 2015, Microsoft released version 25.10586, which included improvements to tab previews and is the second release of Microsoft Edge that is also intended for the public. The update was also rolled out to the Xbox One later on November 12, 2015 as part of the New Xbox One Experience. Microsoft Edge 13 replaces on that OS Internet Explorer 10. On the same day, the update was also sent to users in the Current Branch. On November 18, 2015, Microsoft then rolled out the update to Windows 10 Mobile for Windows Insiders in the Fast Ring. Finally, Windows Server 2016 was also provided with the update in the Windows Server 2016 Technical Preview 4 on November 19, 2015.

Microsoft announced at Build 2015 that it was working on support for extensions in Edge. The functionality would be part of Edge 13 in the Windows 10 November update but was postponed. The functionality would become available for Windows Insiders at the end of 2015 or the beginning of 2016 as part of the Insider Previews for Redstone. The first version of Edge 14 was released on December 16, 2015 as build 25.11082. The update brought experimental support for VP9. On January 13, 2016, Microsoft released build 27.11099 from Microsoft Edge, which is laying the groundwork for EdgeHTML 14. This new version also includes a flag to load extracted extensions into Edge. Furthermore, support for CSS3 was improved. On January 21, 2016, Microsoft released version 28.11102, this version added a context menu to navigation buttons and made some changes to the menu for extensions support. Versions 28.14251 and 28.14257, released on January 27, 2016 and February 3, 2016 respectively, focus again on preparations for supporting extensions and inserting EdgeHTML 14.

On February 18, 2016, Microsoft Edge released 31.14267 with improved favorites and download management. Furthermore, the update included several new flags as part of EdgeHTML 14, this update included improved support for HTML5, CSS3 and ECMAScript 6 and 7. Among other things, fundamental work for Web Notifications and WebRTC 1.0 was added with this update. On February 19, Microsoft also released the same update for Windows 10 Mobile. On February 24, Microsoft released version 31.14271 of Edge, which contained no visible changes.

On March 17, 2016, Microsoft released version 34.14291 of Edge for both desktop and Mobile users. The update contained the long-awaited extension support. In addition, Edge can now also pin tabs, which means they take up less space on the tab bar. Microsoft also added support for features such as "Paste and Go" and "Paste and Search". For Mobile, the update also makes it easier to close tabs by making the close button for each tab larger. Finally, the update contains some minor changes to the interface.

On April 6, 2016, Microsoft released version 37.14316 of Edge which further improved support for extensions. The developer tools can now be used to debug extensions. The favorite hub was provided with a tree structure. From now on, favorites can be imported from Mozilla Firefox and imported from Internet Explorer and Google Chrome is improved. Users can now also choose the default download location and if Edge is busy with downloads it will give a warning when closing the browser. Finally, EdgeHTML was provided with a series of new functions such as Web Notification API, Color input element, support for Opus and more. On April 14 the same update was released for Windows 10 Mobile as version 37.14322 followed by version 37.14327 on April 20 for Mobile which contained no changes.

Microsoft started releasing previews for Edge 15 on August 11, 2016 with version 39.14901. New in build 14926 is the possibility to use websites as reminders in Cortana. There are also new options for exporting and importing favorites. In addition, the various new versions released since August 2011 included several improvements to the support for standards.

EdgeHTML is Edges layout engine of the same name. It is a fork from Trident. EdgeHTML differs from Trident in that several pieces of code that were responsible for legacy support have been removed. For example, EdgeHTML is no longer able to use ActiveX elements, compatibility mode has disappeared from the engine, as well as support for attachEvent, X-UA-Compatible, currentStyle, among others. There is also support for more than 40 new standards and more than 3000 problems have been solved in Edge. EdgeHTML still uses the JavaScript engine Chakra that was introduced in Internet Explorer 9.

Thanks to the new Edge engine, which removed various obsolete components from the software, and various other optimizations and improvements to the Edge engine, Edge has better performance than Internet Explorer 11, Google Chrome and Mozilla Firefox on, among other things, Google's Octana 2.0 test and JetStream 1.0.

Microsoft Cortana is integrated with Edge 12 and is active in languages supported by Cortana. Cortana can be used to request information such as address and contact details of websites that are visited. For example, it can also request a restaurant's menu. Cortana will also provide extensive information in the search bar. Searching for the weather at a specific location will display the weather forecast in the address bar. The functionality was expanded in Edge 13 so that you can also use Cortana within PDFs.

The Internet Explorer 11 app on Windows 8.1 and Windows Phone 8.1 supported a mode called "Reading Mode", in which the browser would remove all graphic elements from a website and only show the important content in an environment optimized for reading text. Edge 12 brings this feature to the desktop.

Edge 12 also includes a mode for taking notes on a website and then sharing it. This is done by "freezing" the webpage in the state it is in at the time the notes are applied. This makes the links on the page still interactive. The page can then be shared. Integration with Microsoft OneNote is also available.

Unlike Internet Explorer 11, Microsoft Edge uses all security tools that other Windows apps have, such as sandboxes, which means that the app runs separately from other components. ASLR (Address Space Layout Randomization) is also used to give processes a random structure. This in conjunction with 64-bit versions of Windows adds an extra layer of security. Furthermore, Microsoft Edge no longer offers support for ActiveX elements, which often led to security problems for Internet Explorer.

At Build 2015, Microsoft officially announced that it was working on extension support for Edge. However, the two subsequent versions of Edge (versions 12 and 13) do not yet support extensions. Microsoft started testing extensions in version 14.14291.

Unlike Internet Explorer, Edge is exclusively a Windows Store UWP app. This means it can be used on all devices that use Windows 10, including desktops, tablets, smartphones, Microsoft HoloLens, Xbox One and others.

The Useragent-string from Microsoft Edge is very different from that of Internet Explorer 11. Several tokens have been added to the string, including AppleWebKit / 537.36 to impersonate Apple Safari, (KHTML, like Gecko) to impersonate a browser that uses KHTML based on Gecko, Chrome / 42.0.2311.135 to pretend to be Chromium and finally Safari / 537.36 to pretend to be Safari. The Trident / 7.0 token from Internet Explorer 11 was replaced by the name of the new Edge / 12.10240 engine. The version number refers to the fact that the engine should originally have been in Internet Explorer 12. Also the rv: 11.0 token, which showed the browser revision, was deleted.

For Windows 10 Mobile, all the above changes have been made, but the user agent string also has an Android 4.2.1 token to pretend to be Android. The Microsoft token in the example below indicates the manufacturer's name, here Microsoft, and the Lumia 640 XL LTE token indicates the device, in this example it is the Microsoft Lumia 640 XL LTE. The user agent string on Windows 10 Mobile also shows to be Windows Phone 10.0, this is the old name of the operating system.

"Microsoft Edge" is at the 1st Position in this list. 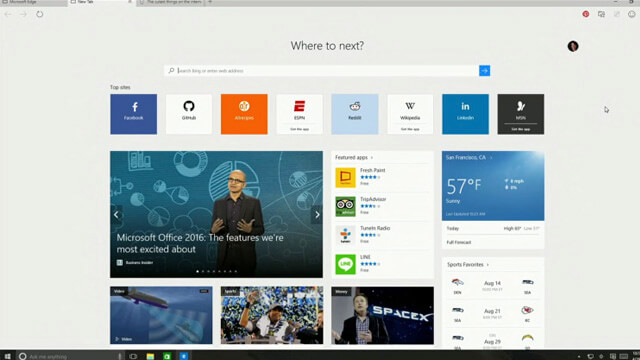 Total Votes: 4819
Votes received:136
Up votes:129
Down votes:7
2.78% Popularity
95% Up votes
5% Down votes
Go to voting page
Comments on Microsoft Edge
Submit
Cancel
4 Comments
The best browser
0
0
Reply
Microsoft allways sucks anytime any year
0
0
Reply
anything made by them is a big disaster waiting to happen...
0
0
Reply
slower than firefox
0
0
Reply