Chromium is an open source web browser project where Google Chrome takes its source code. These explorers share the majority of codes and features, although there are some minor differences in features and they have different licenses.

The Chromium project takes its name from the element chromium, metal where chrome plating is made. Google's intention, as revealed in the developer documentation, is that Chromium will be the name of an open source project and that the final product name will be Chrome, but other developers have taken the Chromium code and released a version under the name Chromium. This is registered under the community package.

One of the main objectives of this project is for Chromium to be a window manager with tabs, or a shell for the web, as opposed to it being a traditional explorer application. This application is designed to have a minimalist user interface. The developers stated that "they must feel light (cognitive and physical) and fast".

Chromium is the name given to open source projects and explorer source code that is released and managed by the Chromium Project. It is possible to download the source code and develop it manually on many platforms. To make Chrome from Chromium, Google takes this source code and adds.

By default, Chromium only supports Vorbis, Theora and WebM codecs for HTML5 audio and video tags. Google Chrome supports this and also codecs that are burdened with patents such as AAC and MP3. On January 11, 2011, the Chrome Product manager, Mike Jazayeri, announced that Chrome would no longer support the H.264 video format for its HTML5 player. In October 2013, Cisco announced that the source code of the H.264 had been opened and would cover all costs required. Since December 2013, Chrome still supports H.264. Linux distributions that distribute Chromium can add support for other codecs for Chromium versions that have been adjusted by them.

"Chromium" is at the 34th Position in this list. 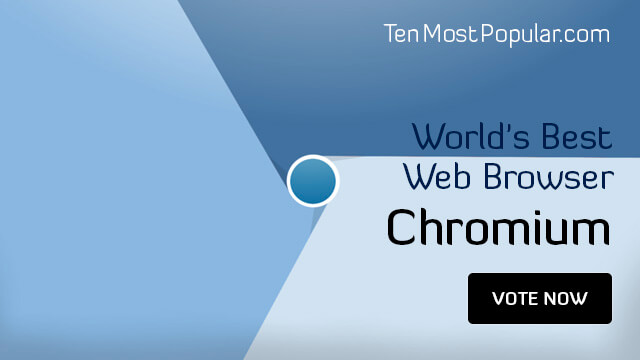