AMosaic was published in the cover story of the March 1995 issue of "Amiga World" magazine. The user interface of the Amiga version is made using the Magic User Interface (MUI) library that allows you to edit the interface including fonts, colors and backgrounds. The browser supports Amiga's data type mechanism for processing image formats. The browser has support for ARexx communication between Amiga programs. Using runtime libraries, the browser supports two different TCP / IP implementations (AS225 and AmiTCP) and DNET communication.

AMosaic is a porting of the Mosaic web browser for the Amiga platform. The development was started in 1993 and was the first graphic web browser for Amiga. AMosaic was based on Mosaic, a web browser from NCSA. However, it was not distributed by the University of Illinois or NCSA. As is the case for other versions of Mosaic, AMosaic is no longer supported or updated. However, it is ported to AROS, an operating system that is compatible with AmigaOS. The developers then started the project IBrowse, which was further developed until 2006.

"Amosaic" is at the 41st Position in this list. 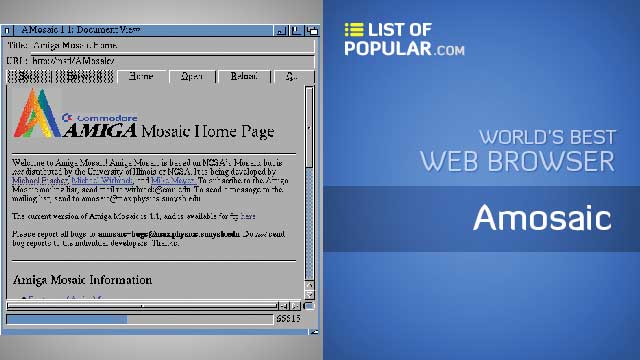