Toshiba Corporation (東芝 東芝, Kabushiki-gaisha Tōshiba) is a Japanese electronics company. It belongs to the top of the largest manufacturer of electrical and electronic devices in the world, and the largest semiconductor manufacturer in Japan. The head office is in Tokyo.

Toshiba was created in 1939 from the merger of the electrical engineering firm Shibaura Seisaku-sho from Hisashige Tanaka and the consumer goods manufacturer Tōkyō Denki. The new company was called Tō kyō Shiba ura Denki, but was mainly known under the abbreviation Tōshiba. Only in 1978 this became the official name of the company. The Kanji signs "tō-shiba" also mean "tō" - east, "shiba" - a magical plant.

The group expanded both through its own growth and through acquisitions, including in the area of heavy industry in the 1940s and 50s. Later major subsidiaries were established such as Toshiba EMI (1960), Toshiba Electrical Equipment (1974), Toshiba Chemical (1974), Toshiba Lighting and Technology (1989) and Toshiba Carrier Corporation (1999).

In October 2006, Toshiba purchased Westinghouse Electric Company for US $5.4 billion. Westinghouse had a turnover of US $1.9 billion in 2005 and achieved a marginal profit. After the acquisition, the nuclear activities within Toshiba increased three times. Toshiba is best known for boiling water reactors (BWR) and has a good position in Japan while Westinghouse is active worldwide with pressurized water reactors (PWR). The market was finally recovering after the major accidents with nuclear power plants in Pennsylvania (1979) and Chernbyl (1986). The prospects were so favorable that there was even talk of a nuclear one renaissance. The recovery, however, came to an end after the Fukushima nuclear disaster in 2011. In March 2017, Westinghouse had to apply for protection against its creditors, putting the group in suspension of payments.

In 2015, Westinghouse took over the Stone & Webster business unit from Chicago Bridge & Iron. The acquisition price was US $230 million. Stone & Webster and Westinghouse are working together on two new nuclear power plants in the United States, the VC Summer power plant in South Carolina and the Alvin W. Vogtle power plant in Georgia. Both projects are behind schedule and the costs are also higher than expected. Toshiba announced in December 2016 that this would require a large facility. After the large loss in 2016, solvency is of Toshiba has already fallen to a worrying level and may further deteriorate due to the problems surrounding Stone & Webster. On 14 February 2017, Toshiba depreciated € 5.9 billion (more than 700 billion yen) on the nuclear division. This is one of the reasons why Toshiba will close its financial year 2016/17 with a net loss of more than € 3 billion and a negative equity.

An accounting scandal emerged in July 2015. From 2008, the company had set the profit at 152 billion yen, about US $1.2 billion, too high. This amount corresponds to 30% of the pre-tax profit in these seven years. An investigation showed that the management set unrealistic profit targets that could only be achieved if the income was presented more favorably and the costs were lower than accounting was justified. Toshiba is considering selling divisions, financial participations and real estate to close the gap in finances and no dividend will be paid out temporarily. Nine top executives had resigned as a result of the scandal on 30 July and the incumbent have received a substantial salary reduction. Toshiba is known for its good corporate governance. This is the largest Japanese accounting scandal since 2011, when Olympus Corporation had to take US $1.7 billion in losses after accounting fraud was found there. On 7 September 2015, Toshiba reported corrected figures. In total, the profit for the years in question was adjusted downwards by 110 billion yen.

In December 2015, Toshiba reported closing the current financial year with a record loss of 550 billion yen (around € 4.2 billion). Half of this amount is the result of a major reorganization in which around 10,600 jobs are lost. In part, these jobs are transferred to a new owner when buyers are found for the business activities. A lot of restructuring is taking place, particularly at the business units for televisions and Personal computers. Toshiba will stop selling consumer laptops in Europe and only sell them in the United States and Japan.

In March 2016, Canon purchased the Toshiba medical division for € 5.3 billion. Toshiba ran into financial difficulties after the accounting scandal and the sale allows the company to pay off debts and improve solvency.

The buyers of the Electronic Devices & Components business unit of Toshiba were announced in June 2017. Toshiba is one of the largest flash memory chip manufacturers in the world. The sale was necessary due to major financial problems at the nuclear business. Various parties were interested, but the plan of a consortium of Japanese and Korean companies and the American private equity investor Bain Capital was the most attractive. They offered 2.1 trillion yen (around € 17 billion) for the chip business. Toshiba's American partner, Western Digital, went to court to block the sale. Toshiba has continued the sale to Bain Capital and partners, thereby taking the risk that the court will ultimately agree with Western Digital. The sale was completed on 20 September 2017.

Toshiba is an international company and slightly less than half of its turnover is realized in Japan.

The company's activities are divided into four business units:

The Energy & Infrastructure business unit supplies installations and components for generating electricity. It also supplies products, including fuel, and maintenance services for nuclear power plants. It is a large activity and represents around a quarter of the total turnover. The revenue share of Electronic Devices & Components is almost the same, but this part has a higher profit contribution. It supplies a wide range of electronic components including computer chips.

Toshiba products are: (digital) copy machines, laptops, hard drives, RAM, electronic components, televisions, video recorders, medical equipment, CD and DVD players and projectors. Most products are supplied to other companies and only one-sixth of the turnover is achieved through direct sales to private individuals.

The development departments of Toshiba made many important inventions, including:

The jump in Toshiba's revenue in 2006 and 2007 is partly due to the acquisition of Westinghouse. A major loss in 2008 was mainly caused by the negative effects of the credit crisis. The revised profit figures, following the accounting damage that became known in 2015, are in the last column.

The company suffered a large loss in 2016, partly due to a one-off write-off on the goodwill of 300 billion yen. As a result, equity decreased sharply, bringing solvency to 12.5%. In the fiscal year until March 31, 2017, the company suffered an even greater loss through a write-off of $11 billion on the value of Westinghouse and other nuclear activities. It closed the financial year with a negative equity of US $5 billion. Toshiba has to show a positive equity again soon, otherwise the company loses its listing in Tokyo.

"Toshiba" is at the 9th Position in this list. 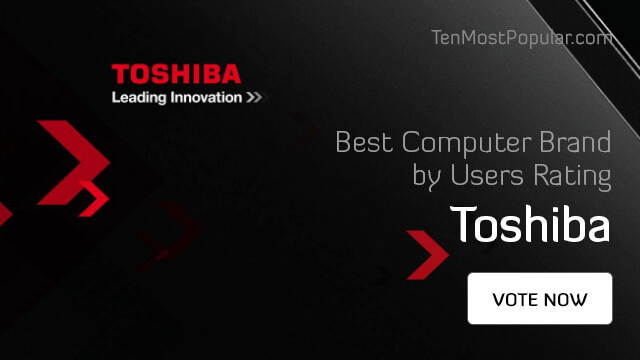