Samsung (hangul: 삼성, hanja: 三星) It is a conglomerate of multinational companies based in Seoul, South Korea. It is the largest South Korean business group, with numerous subsidiaries that cover businesses such as consumer electronics, technology, finance, insurance, construction, biotechnology and the service sector.

The group was founded in 1938 by businessman Lee Byung-chul as a product import and export company, and subsequently expand its business to other sectors. Since then it has become a benchmark of the economic model of large conglomerates (chaebol) that drove the economic transformation of South Korea. From the 1990s there was international expansion through its electronics industry, particularly in appliances, mobile phones and semiconductors.

Samsung has had a great influence on the economic, political, media and cultural development of South Korea. It is estimated that all its affiliated companies represent a fifth of the country's exports, while its income represents 17% of the national gross domestic product (GDP).

The origins of the current Samsung group date back to March 1, 1938. That day the businessman Lee Byung-chul (1910–1987) inaugurated in Daegu an import and export company of perishable products which he called Samsung Sanghoe (in Korean, "three stars"). During the time that Korea was occupied by Japan, the main business was the sale of dried fish and fruits to Manchukuo. At the end of World War II, Korea regained its independence and Samsung thrives by expanding its activity to the process of food and textile manufacturing.

In 1948, Lee formed an alliance with businessman Cho Hong-jai to create the Samsung Moolsan subsidiary (now Samsung C&T), dedicated to commerce and construction. However, the company establishes its official foundation in 1951, when the alliance is broken by disagreements between both parties, while Lee assumes the Samsung brand, Cho would found a Hyosung group a decade later.

During the Korean War, Lee would flee Seoul to temporarily settle in Busan and open the Cheil Jedang sugar refinery (now CJ Group). The presence of the American troops in the south of the peninsula allowed him to restart his commercial activity. At the end of the conflict, he would become one of the key entrepreneurs by benefiting from numerous public works contracts during the Syngman Rhee government.

After the rise to power of Park Chung-hee in 1961, Samsung becomes one of the main conglomerates (chaebol) that would support the private sector in South Korea. According to this economic plan, companies should invest in strategic businesses if they wanted to benefit from state aid, so they started to diversify into insurance (1963) and electronic components (1969).

1 November, 1969, Samsung founded in Suwon what will be its subsidiary more famous: Samsung Electronics, specializes in technology and electronics. Thanks to an agreement with the Japanese NEC Corporation, it began producing home appliances and audiovisual devices, selling more than 10 million televisions throughout the 1970s. Beginning in 1974, it would develop its own semiconductors by absorbing Korea Semiconductor, one of the pioneers in the manufacture of electronic chips, and in 1980ventures into telecommunications.

In addition, in 1974, two important companies for the conglomerate are established: Samsung Heavy Industries, one of the largest shipbuilding companies in the world, and the Samsung Petrochemical company (currently Hanwha Total). The development of these activities consolidates Samsung in the third chaebol in turnover, behind Hyundai and Daewoo.

Lee Byung-chul maintained control of Samsung until his death in 1987, being succeeded by his third son Lee Kun-hee. Throughout the 1990s, the conglomerate was divided into four independent groups for its heirs: Samsung, Shinsegae (department stores), CJ Group (food and entertainment) and Hansol (chemicals). Thus, Samsung was left with the most profitable divisions: electronics, construction and shipyards.

In 1993, Lee Kun-hee announced a change in strategy that would mark Samsung's future. Although its electronics division was one of the most profitable, international consumers perceived that Korean products had less quality than Japanese products. For this reason, a plan was developed to overcome Sony as the world's largest electronics manufacturer, through research and development in new lines such as mobile telephony, DRAM memories or plasma screens, in which it would reach be a pioneer The conglomerate also modernized its corporate image.

Compared to other South Korean conglomerates, Samsung was able to face the Asian financial crisis of 1997 without much impact on its accounts. Together with the division established by the founder, Lee Kun-hee had disposed of its less profitable subsidiaries years ago. On the contrary, rivals Hyundai and Daewoo were forced to complete a restructuring of their debt, which meant that Samsung became the largest company in South Korea.

However, the company was frustrated its attempt to enter the automobile sector. In 1994 the creation of Samsung Motors had been announced, with utilities and commercial vehicles under the assistance of Nissan. The sale of the first models coincided with the outbreak of the Asian crisis, so the subsidiary sold 36.8% of its shares to Renault in 1999. The agreement made the French automaker the most important shareholder and took over 70% of the utilities branch, which would be renamed Renault Samsung Motors, while commercial vehicles ceased to be manufactured.

With the arrival of the 21st century, Samsung has established itself as the most important company in South Korea in turnover, partly thanks to its electronic division. Samsung Electronics became the world's largest mobile phone manufacturer in 2012 by beating Nokia, which has been leading the market since 1998. In addition, management announced a ten-year increase in investments in biopharmacy, biotechnology and smart watches, as well as a new headquarters in Silicon Valley.

Samsung was recognized by Booz & Co. and Boston Consulting Group in 2013 as the second most innovative company in the world, behind Volkswagen, after increasing the R & D & I items by 15%.

The company has assumed two recent crises in October 2016. On the one hand, the war of lawsuits between Samsung Electronics and Apple for alleged violation of patents on smartphones. And on the other hand, they were forced to withdraw all Samsung Galaxy Note 7 terminals from the market due to a manufacturing failure.

In April 2018, South Korean ex-president Lee Myung-bak was accused by the Prosecutor of a series of crimes, including allegedly accepting a bribe from Samsung to pardon Lee Kun-hee, president of Samsung Group, convicted of evasion of taxes.

The Samsung group consists of more than 80 companies between subsidiaries, subsidiaries and investees. The best-known business branch is its technology and electronics division (Samsung Electronics), although it also maintains business in the financial, biotechnology, health, commerce, services, shipbuilding and civil construction sectors. The sum of all these activities alone represents about 20% of the gross domestic product of South Korea.

The following conglomerates are no longer part of Samsung, but decades ago they were part of it and were controlled by the sons of founder Lee Byung-chul.

In 2007, one of Samsung's lawyers reported that the group held funds reserved for alleged bribery and evidence manufacturing operations in South Korea. South Korean President Roh Moo-hyun had to open an investigative commission at the request of the National Assembly, not without reluctance. Although the company denied such accusations initially, the existence of the fund with more than 4,600 million dollars in different bank accounts would be demonstrated. The company's president, Lee Kun-hee, resigned and in July 2008 he was convicted oftax evasion, although he could avoid jail because he paid $ 45 million as compensation before the trial.

The next president of South Korea, Lee Myung-bak, granted the pardon a year later. In 2018, the South Korean Prosecutor's Office charged him with a possible crime of corruption by accepting an alleged bribe from Lee Kun-hee's environment.

Throughout the 2010s there have been a series of lawsuits between Apple Inc. - manufacturers of the iPhone and iPad - and Samsung. In April 2011, Apple had sued them for alleged patent infringement in the design of Samsung Galaxy terminals (smartphones) and Samsung Galaxy Tab (tablets), such as swiping to unlock or auto correct. A month later, the South Korean company responded with another lawsuit on the same terms, in addition to claiming that the Americans used proprietary technology. The judicial struggle of both companies led to numerous lawsuits in more than 50 countries, as well as attempts to block trade, which led to the intermediation of the Directorate General for Competition of the European Union and the International Trade Commission of the United States. In August 2012, a court in California (United States) gave Apple the reason and forced Samsung Electronics to pay 450 million dollars, although it did not prohibit the sale of the terminals. This ruling was ratified in 2016. However, both parties reached an agreement in 2014 to abandon disputes in other countries.

"Samsung" is at the 10th Position in this list. 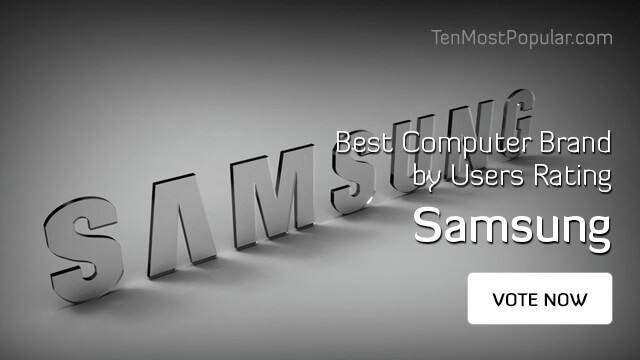