Panasonic Corporation, until October 1, 2008 Matsushita Electric Industrial Co., Ltd., is a Japanese electronics conglomerate and also the world's largest producer of electronics. The company is known throughout the world mainly for its main brand Panasonic. The company is based in Kadoma, Osaka, Japan. In 2014 it had around 250,000 employees, three-fifths of whom work outside of Japan.

The company was founded in 1918 and has grown into one of the largest Japanese technology and electronics companies, such as Sony, Hitachi, Toshiba, Sharp Corporation and Canon. In addition to electronics, it offers non-electronic products and services such as home renovation services. Panasonic was the fourth largest manufacturer of televisions in the world in 2012, by market share.

Konosuke Matsushita was born in November 1894 south of Osaka. He started working as an apprentice in a Hitachi store. Upon reaching adolescence, Konosuke obtained a job at the Osaka Electric Light Company as a technical wiring assistant, where for his quick learning he was promoted several times. However, following his father's advice on the advantages of being an entrepreneur, on June 15, 1917 he abandoned the security of a well-paid job to found his own electrical accessories manufacturing company.

The company was named Matsushita Electric Devices Manufacturing Works. In 1922 Konosuke saw the need to build a new factory and office to house his growing company.

Bicycle lamps under the National brand and electric irons were marketed during the first years. Later, radios and cell batteries. In 1929, Konosuke changed the name of the company to Matsushita Electric Manufacturing Works, defined the basic management philosophy, contained in the basic management objective, the seven principles and the corporate motto, to guide the growth of Matsushita.

In the early 1950s, Matsushita began the production of electric washing machines and televisions due to the popularity of electrical appliances. The first black and white television began to be marketed in 1952 and then in 1960 the color television was introduced. In these years, other companies of the Matsushita Electric group were established. In 1954 he acquired 53% of Japan Victor Co. (JVC) and in 1959 established Matsushita Electric Corporation of America in New Jersey, USA. and other companies are created in the Americas.

Panasonic (formerly called National Panasonic in countries of the American continent), is the leading brand of electronic products manufactured by the Matsushita group. The denomination "PanaSonic" was created in 1955 and was used to label its exports of speakers and lamps. The use of multiple brands (National, Panasonic, Technics, Technisonic, and McSilver Radios) by the company lasted several decades. Later, it was used for high-quality television and audio equipment in conjunction with other low-cost products. In autumn of 2005, Matsushita changed its official name to the world famous Panasonic.

Matsushita Electronic Corporation (MEC) was founded in 1952 and was the first partnership between Matsushita and Philips. MEC is a supplier of semiconductors, display tubes and lighting articles. The MEC result was under pressure in the early 1990s due to overcapacity in the field of semiconductors. In 1993, Philips sold the 35% stake in MEC to Matsushita for €1.36 billion (3 billion guilders). MEC then had 22,000 employees and had branches in Japan, Singapore, Malaysia and the United States.

In 1954 it took a majority stake in Victor Company of Japan Ltd. (JVC). The first steps were taken in 2007 to merge JVC and Kenwood. Panasonic's shareholding in JVC fell from 52% to 37%. In 2011, Panasonic sold the last shares in JVC Kenwood.

The company became a major electronics producer internationally with Philips, Sony, and Thomson as major competitors.

Matsushita took over Universal Studios in December 1990. In 1995 it sold a majority stake to Seagram and eventually the latter took over all of Matsushita's shares.

Via Panasonic and JVC, the group is represented in the Blu-ray Association, which argues for the use of the Blu-ray disc as the successor to the DVD.

In mid-2010, Panasonic made an offer for the remaining shares of Sanyo Electric and Panasonic Electric Works that it did not yet have. The bids had a total value of $9.4 billion and were paid in money and Panasonic shares. Panasonic already had a 51% stake in Panasonic Electric Works, and in 2009 took a 50% stake in Sanyo to gain access to the technology of rechargeable batteries for electronics and automobiles. It is in line with the company's strategy to exchange low-margin activities for solar cells, batteries, and other energy-related activities with better outlets. The acquisitions were completed in April 2011.

In October 2008, Panasonic Headquarters in Kadoma changes its name to Panasonic Corporation, the name it is known worldwide.

In December 2015 Panasonic announces the purchase of Hussmann for $1.5 billion. Hussmann is a US manufacturer of refrigeration systems, specialist in the sector of retail food sales, with greater implantation in the markets of the United States and Mexico.

The most important trade names of the Panasonic Corporation are:

It currently manufactures LCD and LED TVs, as well as DVD players, video players, portable CD players and all kinds of household products. On the other hand, it abandoned the production of CRT TVs in 2006 and plasma in 2013.

Panasonic was the first corporation to introduce a "Mirrorless" camera (DMC-G1) to the digital photography market in 2008. This revolution began after being part of the 4/3 consortium that it shares until now with Olympus (now m4/3). This concept is causing a great change in the manufacture of cameras in the world, since it dispenses with the mirror and has advantages of exposure in real time and full time autofocus. Panasonic has had a strong influence on the "budget" segment with its "GH" camera line, in addition to having a large number of high-quality professional film equipment.

Until the 2009 season he was the main sponsor of the Toyota Racing team in Formula 1, also known as Panasonic Toyota Racing.

The 29 of July of 2010, Panasonic announced that it had reached an agreement with Sanyo Electric Co., Ltd. with the aim of turning it into a subsidiary, "owned 100% Panasonic", from April of 2011.

Below is a table with the most important financial results of Panasonic Corporation from 2006. The financial year ends on 31 March and the year 2015 relates to the period 1 April 2014 up to and including 31 March 2015.

"Panasonic Corporation" is at the 18th Position in this list. 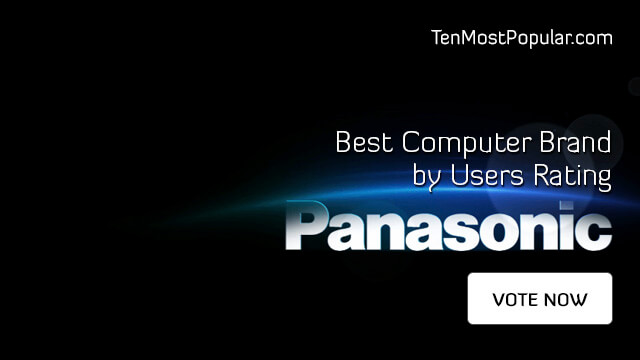