Nvidia Corporation is a multinational company specializing in the development of graphic processing units and integrated circuit technologies for workstations, personal computers and mobile devices. Headquartered in Santa Clara, California, the company has become one of the leading providers of integrated circuits (CI), such as graphics processing units (GPUs) and chipsets used in graphics cards for consoles and motherboards for PC.

Nvidia expanded its presence in the video game industry with its SHIELD Portable, SHIELD Tablet and SHIELD Android TV. Since 2014, Nvidia has changed to be a company focused on four markets: gaming, professional visualization, data centers and auto. NVIDIA produces GPUs including the GeForce series for video games, the NVIDIA Quadro series of computer-aided design and digital content creation at workstations, and the nForce integrated circuit series for motherboards.

Jen-Hsun Huang, Chris Malachowsky and Curtis Priem founded the company in January 1993 and placed the headquarters in California in April of 1993.

In 1995 NVIDIA launches its first product, NVIDIA NV1. This is a PCI card which was marketed under the name of Diamond Edge 3D based on texture maps of quadratic surfaces.

The GeForce name that he used for his graphic models was created through a contest in California to name the next generation of NV20 graphics cards.

In 2012, tablets and smartphones with the Tegra 3 processor, created by NVIDIA, appear on the market.

In 2013 Nvidia decided to license its graphic technology so that manufacturers of all types of devices can take advantage of their patent catalog, following the same model as ARM Holdings.

For fiscal year 2018, Nvidia reported revenues of US $3.047 billion, with an annual income of US $9.714 billion, an increase of 40.6% over the previous fiscal cycle. Nvidia's shares were trading at more than $245 per share, and its market capitalization was valued at more than $120.6 billion in September 2018.

Graphic chips for professional and scientific use

Nvidia does not publish the documentation of its hardware instead, Nvidia provides its own binary drivers for X.Org and a thin open source library for the interface between the Linux, FreeBSD or Solaris cores and its proprietary software. Nvidia also provided, but stopped supporting, an obfuscated open source driver that only supports 2D acceleration.

The proprietary nature of Nvidia drivers has generated a lot of dissatisfaction within the free software community. Linus Torvalds has officially declared that Nvidia "has been the worst problem we have had with hardware manufacturers."

Nvidia drivers are known to have artificially imposed restrictions, such as limiting the number of monitors that can be used at the same time.

"NVIDIA" is at the 17th Position in this list. 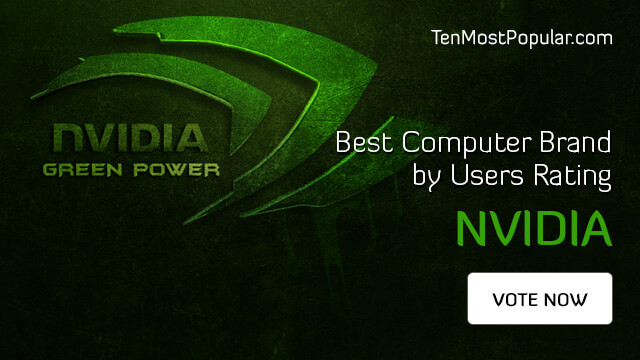