It produces the Versa notebooks for the international market and the Lavie series for the Japanese market. NEC was also the creator of the Earth Simulator, the fastest supercomputer in the world at that time. NEC is part of the Sumitomo group.

NEC makes DVD burners, LCD screens, laptops, projectors and network solutions, among other things. Labelflash has been taken over from NEC from Yamaha and improved to compete on the Lightscribe from HP. It also created the Earth Simulator in 2002, at the time one of the fastest computers in the world. The company supplies both individuals and companies. Since 1994 it has been active in Europe on the PC and server market. The company trades with companies under the name NEC, for private individuals the name is Packard Bell.

In the mid-1980s, NEC developed various game computer systems, including the PC Engine, SuperGrafx and PC-FX, which were particularly successful in Japan.

The company is also active in the telephone world. From 2000 to 2008, NEC had a contract with KPN and, in collaboration with NTT DoCoMo, it provided the online internet service i-mode, which was mainly supported by Toshiba and NEC telephones.

In 1983, the group changed its English name to NEC Corporation, the initials becoming Nippon Electronic Corporation. In 1996, NEC bought Packard Bell and merged its micro-computers and servers business with that of the manufacturer, retaining the original brands in the North American and European markets.

Now in operation on all five continents, NEC is still run from the Tokyo headquarters and present on all major stock markets worldwide. The current range of activity is very broad, and ranges from basic research to production in all areas of electronics, computing and telecommunications.

In the 1980s, NEC Semiconductors was the world's leading semiconductor manufacturer far ahead of Intel.

In 2005, NEC Semiconductors advanced to the 8th place in the ranking of the top 20 semiconductor manufacturers. IN 2006, NEC is in 11th position, due to revenue almost stagnant (in the same ranking, conducted by iSuppli).

In January 2009, NEC announced the phasing out over two years 20 000 jobs in order to reduce its losses, which amounted to 1.46 billion dollars in October and December 2008.

At the end of January 2011, NEC announced the creation of a joint venture with Lenovo, called Lenovo NEC Holdings BV, to manufacture computers for the Japanese market. NEC's PC division becomes a wholly-owned subsidiary of the joint venture, which is 51% owned by Lenovo. In 2013, NEC established a new research center in Singapore.

In November 2015, NEC proposed to work on a connection between smart glasses and a smartwatch to "project" a client on the user's forearm. The application would be called "ARmKeypad". The firm is seeking to position itself on the augmented reality market.

In January 2017, the group announced plans to cut 3,000 jobs in Japan, out of a total workforce of 100,000 people worldwide, through a voluntary redundancy plan.

In December 2018, NEC announced the acquisition of the Danish company KMD IT services for about $1.23 billion.

In 1980, NEC created the first digital signal processor, the NEC µPD7710. In the last five years NEC has positioned itself as one of the four major companies by number of patents published in the United States, with an average of 1764 acquired per year.

Formerly called Nippon Electric Company, renamed in 1983, it continues with the old name in Japan. NEC was founded by Kunihiko Iwadare. NEC was established with Western Electric to become the first Japanese joint venture with foreign capital.

As a result of this agreement, NEC Corporation stops manufacturing optical units and other computer components. Currently its computer division belongs to Lenovo.

In 2007, NEC produced one of the world's fastest supercomputers, the SX series, and the latest model being the SX-8. Although the Earth Simulator, the NEC- built Japanese weather/weather calculator with SX-6 systems, lost in November 2004 the official title of the world's most powerful calculator for IBM's Blue Gene, it is only in favor of parallel calculators composed of much larger scalar units, and vector units calculation SX remain the fastest on the market in terms of processor speed, with 16 G FLOPS vector calculus for the SX-8 (that is to say 16 billion arithmetic operations on floating point numbers per second).

In 2006, an improved version was released, the SX8-R (Reinforced) displaying 35 G flops. This is the model chosen by Météo-France for its new computing cluster that carries out weather forecasts. It consists of 16 nodes of 8 processors, thus bringing its theoretical power to 4.5 Tera - Flops.

NEC was also one of the first players in the game console market between 1987 and 1993, with PC-Engine, SuperGrafx... before abandoning the sector against Sega and Nintendo, these consoles had the particularity of using as support data Hu-Cards, cards in credit card format with connectors.

With each change of appearance of NEC consoles, the cost of production and the selling price go down, the hull and connectivity can vary, and the color of the console changes. The PC-Engine is white, the CoreGrafX is dark gray, the CoreGrafX II is light gray, the Duo is black, and the Duo-R and Duo-RX are white. 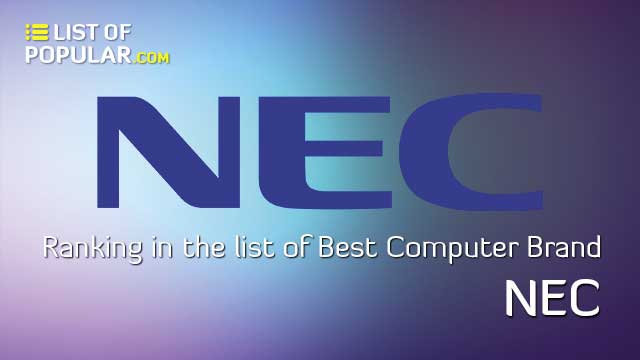