Micro-Star International (MSI), a manufacturer of computer hardware, was founded in August 1986 in Taiwan. The company's headquarters is located in the District Zhonghe of the city New Taipei City.

MSI was founded in August 1986 and in 2009 employed more than 2,500 engineers in its research and development department.

In 2010, MSI released its results: $12.7 million in net income. As for its deliveries of motherboards, they would have reached according to DigiTimes between 4.1 and 4.4 million units, a number beyond forecasts (+10%).

The annual production of MSI in 2009, over 20 million motherboards and graphics cards 11.8 million, making MSI one of the largest computer component manufacturers in the world.

MSI is known to end users especially as a manufacturer of motherboards and graphics cards for PCs, but also offers a variety of products in the field of computer accessories, complete systems and notebooks.

Main business areas of MSI are:

The brand name Microstar belongs in Germany to Medion, which also purchases products - mainly motherboards and graphics cards - from MSI.

In June 2012, MSI presented at the Taiwanese IT fair Computex in Taipei its first slider Ultrabook under the name Slider S20, which can also be used as a tablet thanks to its touch screen in conjunction with the slider technology. The provided with an 11.6-inch display device has a resolution of 1,366 × 768 pixels.

Under the name Winki, some MSI motherboards are pre-installed with a Linux system on a special flash memory, which is intended to provide a compact, virus-safe and fast booting system for basic tasks such as surfing the Internet.

The company employs approximately 16,900 people worldwide and has plants in China and Taiwan. Sales in 2016 amounted to approx. € 3.4 billion.

MSI's factories were originally in Taiwan (at Jung-He). Since 2000, the company also has factories in China (in Kunshan and Shenzhen).

"MSI" is at the 4th Position in this list. 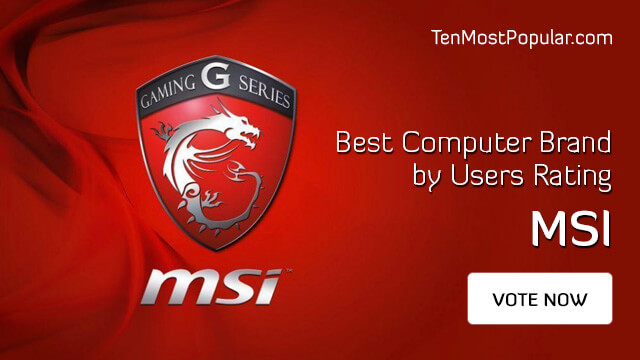