International Business Machines Corporation (IBM, nicknamed Big Blue) is a company that is best known to the general public for the first IBM Personal Computer. IBM's core activities include designing and selling computer hardware, software, technology and services in the IT sector. The company is also called Big Blue, referring to the great power of the company and the blue logo. The first Dutch branch was opened in 1940. The head office is in the city North Castle in the state of New York.

IBM is one of the largest IT companies with more than 350,000 employees worldwide and revenues of $79.59 billion (2018). IBM is active in more than 160 countries. For 19 years in a row, IBM has been registering the worldwide record number of patents through major investments in (fundamental) science and research.

Areas where this company is involved include:

IBM's PC branch was transferred to the Chinese Lenovo in 2004, along with Intel- based servers (Netfinity, e-Servers).

In 1896, Herman Hollerith, inventor of a punch- based data processing machine, founded the Tabulating Machines Company. In 1911 the Computing Tabulating Recording Company (CTR) was established in the US state of New York. This was a merger of three companies: Hollerith's punch card company, the Computing Scale Company of America, where scales and meat slicers were produced, and finally the International Time Recording Company, a manufacturer of industrial timepieces. In 1924 the company was renamed International Business Machines.

In 1920 the Tabulator came on the market, a machine that could print punch cards. In 1924, the system was used to store the data of 26 million workers, under the Social Security Act of Franklin Roosevelt. Of course, mechanical punch card reading machines were also developed. However, the part of the organization that operated under the name Hollerith was also responsible for the punch card systems in the concentration camps in Nazi Germany. IBM collaborated with Nazi Germany, a black page in the history of the company.

During the 1940s people started working on electronic calculators with the help of electron tubes. Around 1955 the toroidal core memory was developed for data storage, and in 1956 the first hard disk (the RAMAC) followed.

In 1959 the first mainframe computer came on the market with the IBM 1401 and business automation began to take hold, initially on the basis of punch cards.

In 1961 a renewal in the field of the electric typewriter followed: the hammers were replaced by an interchangeable ball (IBM ball), with which various fonts and even mathematical symbols could be typed. This letter ball was a precursor to the daisy wheel. It had 88 characters on it and it could turn in all directions to put the typed letters on the paper, with a maximum speed of 15 characters per second. The ball replaced the traditional letter hammers, which could quickly become entangled in fast typing. The ball could easily be replaced in order to be able to write with a different font, while with a traditional typewriter no other fonts were possible. This type of typewriter was produced in Amsterdam from around 1962, among others.

In 1967 the diskette came on the market and in 1970 the barcode. The next step was the IBM Personal Computer, the first version of which was introduced in August 1981. This was a small computer for the business market with a 16-bit microprocessor from Intel, the 8086/8088 and PC-DOS 1.0, the first operating system from Microsoft. This type of computer would become the standard in business use. The rather quickly introduced IBM PC XT, equipped with a hard disk, became the standard computer with which other companies wanted to be as compatible as possible. Such a machine required approximately an investment of around 10,000 guilders. The price fell rapidly under the influence of counterfeit machines from competitors (clone PCs). IBM would later also write an operating system for Intel processors, OS/2. This was not (commercially) a great success.

Since the second half of the seventies, IBM has expanded its market leadership with midrange computers for medium-sized companies. IBM is still the market leader in this category with its System i (i5/OS or Linux), System p (AIX or Linux) and System x (Windows or Linux) servers.

In 1991, the production and sale of printers were placed in a separate division, Lexmark. This was sold in 1995. The ThinkPad laptop computer was introduced in 1992. In 1996, IBM chess computer Deep Blue beat the then chess champion Garri Kasparov.

The consultancy department of the then PricewaterhouseCoopers was taken over in 2002. Worldwide there were 30,000 employees, in the Netherlands 1700.

In December 2004, IBM sold the PC division to Chinese computer builder Lenovo. Lenovo paid $650 million in cash and $600 million in treasury shares for the division. Initially there was uncertainty as to whether the US government would approve the acquisition, the government thought Lenovo might get too sensitive American technology. Proponents of the acquisition, however, said that every company can have computer technology and that Lenovo already had the technology itself. Finally, on March 9, 2005, the deal was approved by the Committee on Foreign Investment in the US (CFIUS) and this acquisition is a fact. On 6 June 2005, IBM, in collaboration with the École Polytechnique Fédérale de Lausanne (EPFL), launched the Blue Brain Project. The aim of the research was to make a detailed model of the neocortex.

In 2008, the Petaflop border was broken for the first time: a supercomputer managed 10 to calculations per second and in 2011, the Watson computer managed the Jeopardy TV quiz! to win from human champions.

IBM has transferred its loss-making chip division to GlobalFoundries with an additional $1.5 billion. The plant in East Fishkill and the Essex Junction GlobalFoundries plant gained access to IBM technology and know-how and will provide chip systems for IBM systems for a minimum of 10 years. IBM suffered a total pre-tax loss of $4.7 billion on this transaction, which was completed in 2015. 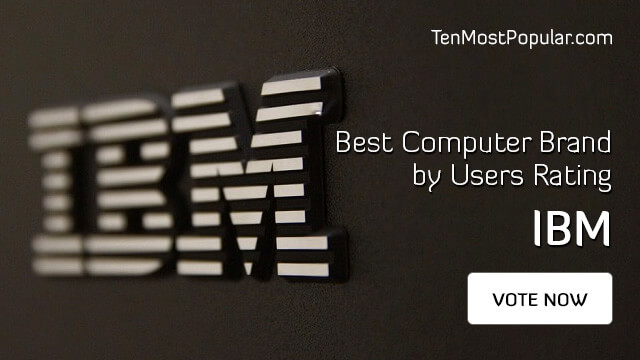