The Chromebook is the name given by Google to notebooks running the Chrome OS operating system. These devices are mainly intended to perform different tasks with interface to the Google Chrome web browser.

Chromebook is a personal computer that works with the Google Chrome OS operating system. The devices are of a different class from the personal computer, between the pure cloud client and traditional laptops. The first devices were launched for sale with this operating system were hand Acer and Samsung officially announced during the developer conference Google I/O in May 2011 and starting to marketed from 15 June 2011.

Most applications and their data reside in the cloud rather than on the device itself. For this reason, Chromebooks only need much smaller local storage space than regular laptops. Their computing power is also generally lower, which does not prevent them from making enough efficient devices for a large number of tasks thanks to their flash memory (rather than magnetic hard disk).

Chromebooks bring several advantages over the usual laptops: unified graphical interface, ease of management of the software via the store of applications, online backups, and facilitated migration). They also store more personal user data at a single company (Google), which can be seen as a disadvantage. However, for professional use (and therefore also for education), they guarantee a high security of data, including personal data with a G Suite account, compliant with the requirements of the RGPD and ANSSI. Chromebooks are also suggested in the CARMO (Reference Framework for Access to Learning Resources via Mobile Equipment).

With the release of Windows 10 (2015), Microsoft is catching up with Chrome OS regarding many of these features (both convenience and inconvenience). Nevertheless, many companies (Veolia, Decathlon,) migrate to Chromebooks for reasons of flexibility, security, and also online collaboration capability.

The first Chromebooks, from Acer and Samsung, have been available since June 2011. At the beginning of 2013, Lenovo and HP also launched Chromebooks. Chromebooks use Intel Atom, Intel Celeron and ARM processors, have 2 or 4 gigabytes of memory and 16 gigabytes of SSD memory or a normal hard drive.

In March 2018, Acer and Google announced the creation of the first Chromebook tablet: the Chromebook Tab 10. This device would compete with the Apple iPad tablet market with a discount on the education market. The 10-screen tab (9.7 inches, 2048 x 1536 resolution) was identical to that of the iPad. The device contains a stylus. Neither of the devices contained a keyboard.

Chromebooks are marketed with the Google Chrome OS operating system, which uses the Linux kernel and the Chrome web browser and with an integrated media player. Your start time 8 seconds and all content, whether games, programs or personal documents are instantly updated to the server automatically, whenever available connection, either 3G or Wi- Fi, being able to access all the information from any compatible point or device. On the other hand and unlike other platforms, the design of the Chromebook is designed to update itself, without the user having to perform manual searches.

Being based purely on the cloud, its offline capability is limited. Instead of the user having to install software in the traditional way, Chromebooks work with applications that can be downloaded from the Chrome Web Store, either free or paid. According to Google, it states that thanks to the multilayer architecture, it eliminates the need for any type of antivirus software. The system supports USB devices such as web cam, mice, external keyboards, and flash memory with a very similar operation to the plug and play of other operating systems. Being focused on web browsing, the Chromebook keyboard includes several specific keys to improve the online experience, such as controlling windows that open, browser opening and closing keys and a quick search button.

The Chromebook requires to have a Gmail account, which is the one that will be used to access the laptop and through which all updates will be made, in addition to keeping open the related Google accounts such as YouTube, Google+, Google Maps and other services of the company in the same way that happens with the Android operating system that Google launched for smartphones.

The first prototype, the Cr-48, was officially presented at the May 2011 annual I/O conference, after being offered to volunteers for a few months.

From January to November 2013, 1.76 million Chromebooks were sold at the business to business channels to the United States.

On February 21, 2013, Google launched the Chromebook Pixel, a computer that does not have the signature of a manufacturer, and has a touch screen.

On February 21, 2014, Google Play launches the availability of the Chromebook HP 11 for France. After being launched and removed from sale in the United States at the end of 2013, due to a charger problem, the HP 11 resurfaced at the beginning of 2014. Today, computer is available, in particular, for the United States, the United Kingdom, Australia, France.

On March 11, 2015, Google unveiled the Chromebook Pixel 2 at the launch of the Google Store. It is the second computer in the world to benefit from the new USB standard, USB Type C (3.1).

In April 2015, Google announced the Chromebit (en), a PC-on-a-stick also based on ChromeOS.

On May 18, 2016, at the 2016 I/O Annual Conference, Google announced that Android apps will be supported on Chromebooks.

During the first quarter 2016, sales of Chromebook exceed those of Apple Macs in the US.

The logo is based on the Google Chrome browser.

In March 2018, Acer and Google announced the creation of the first Chromebook tablet: the Chromebook Tab 10. This device was to compete with the market for discount Apple iPad tablets in the education market. The tab 10 screen (9.7 inches, 2048 x 1536 resolution) was identical to that of the iPad. The device includes a stylus. Neither device included a keyboard.

"Google Chromebook" is at the 21st Position in this list. 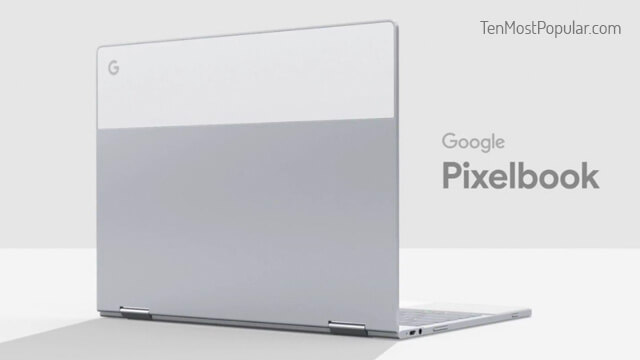