Dell Inc. is an American computer manufacturer based in Round Rock, Texas. In addition to producing personal computers (in which they are one of the largest in the world and market leader in the United States), Dell also produces servers, workstations, hardware for networks, PDAs, software, television sets, monitors, printers and until the end of 2012 smartphones.

Michael Dell founded Dell's predecessor, PC's Limited, in 1984 while studying at the University of Texas at Austin. The company became extremely successful, which caused him to leave university at the age of 19 to fully focus on his company. In 1985 the company produced the very first computer with its own designed, the Dell Turbo. This computer contains a currently fast Intel 8088 - processor, which at a rate of 8 megahertz ran. In 1987 the company was renamed to Dell Computer Corporation. Dell has been at NASDAQ since 1988 noted.

In 1992, Dell entered the Fortune 500 list of the world's largest companies for the first time. In 1999, Dell took over the first place in the computer market in the United States from Compaq. In 2002, Dell lost this position to Hewlett-Packard, who took over Compaq in that year, but in 2003, Dell came back to the top. In 2003, the company's shareholders approved a name change to Dell Inc. good to show that the company produces more than just computers.

At Dell, computers are only built when an order has been placed (on demand), which means that stocks are extremely low, which has the advantage that inventory costs can be kept low. Dell uses this strategy in almost all major markets in the world where they are present.

Dell from the stock exchange

In September 2013, Dell's shareholders agreed that Michael Dell would regain full control of the company. Together with the investment company Silver Lake, he takes Dell from the stock market for $24.6 billion. This puts an end to the months of takeover battle. Billionaire Carl Icahn and Southeastern Asset Management had proposed an alternative to the other shareholders of Dell, but this proposal failed. The Dell share disappeared from the stock exchange in November 2013.

In October 2015, it was announced that Dell wants to take over the listed data storage company EMC Corporation for $33 per share or for $67 billion (€58.9 billion) in total. With the acquisition, the combination becomes the largest private technology company in the world. EMC supplies specialized storage systems to large business customers who move their IT infrastructure to the cloud. The acquisition also includes the 70% stake in EMC in VMware. That company makes software with which multiple virtual computers can run on a server and with which the computing power is used efficiently. Dell is struggling with stagnating sales of computers and with EMC it is becoming active in a growth market. The shareholders of EMC and the regulators still have to agree to the plan.

Dell was founded in Texas in 1984 with a market capitalization of only $1000, the minimum permitted under Texas law. On June 22, 1988, Dell was listed on the NASDAQ in New York under the DELL symbol. After an offer from founder Michael Dell, the stock disappeared again in November 2013.

Half of the turnover was achieved in 2013 in the United States and the rest internationally. The company had 111,000 employees, more than 60% outside of the US.

Dell had a market share of 17.0% at the end of 2004. Dell has been the global market leader in the computer market since 2001 until February 2007, putting HP in second place. In the second quarter of 2015, Dell had a 14% stake in global PC sales and is in third place after HP and Chinese Lenovo.

"Dell" is at the 2nd Position in this list. 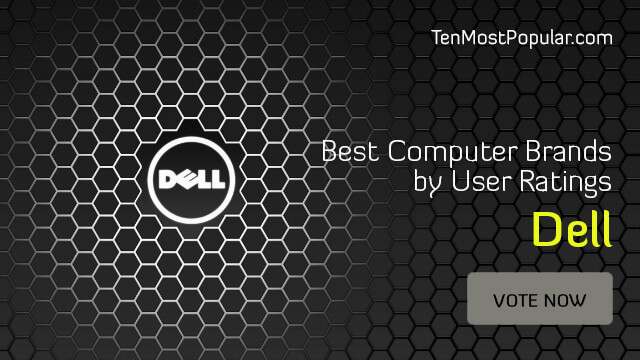