Compaq Computer Corporation was a personal computer company founded in 1982 by Rod Canion, Jim Harris and Bill Murto. During the 1980s, Compaq produced some of the first PCs compatible with IBM PC at a low cost. The company became the largest PC manufacturer during the 1990s. The term "COMPAQ" is an acronym in English for "Comp atibility a nd Q uality", in Spanish "Compatibility and Quality". It existed as an independent company until 2002, when it merged with Hewlett Packard. His total disappearance, at the hands of Hewlett Packard, occurred at the end of 2013.

Compaq was founded on February 14, 1982 by Rod Canyon, Jim Harris and Bill Murto, three managers of the semiconductor manufacturer Texas Instruments. The name was an acronym that stood for "Compatibility and Quality".

The first product was the Compaq Portable, a portable personal computer that used the same operating system as the IBM PC. The Compaq Portable came on the market in March 1983. 53,000 of them were sold in the first year and the product set a sales record in the following three years.

In 1987, Compaq released the first PC to run on an 80386 processor from Intel. Compaq was also one of the advocates of the EISA standard. In the mid -1990s, Compaq was one of the first manufacturers to sell PCs for less than a thousand dollars. In order to maintain this price level, the switch was made to processors from AMD and Cyrix. Due to the price war, Compaq in particular pushed IBM and Packard Bell out of the market.

At the end of the 1990s, Compaq went on the takeover path. In 1995 Compaq took over the Thomas-Conrad network company. The company made an offer for Gateway in 1997 for an amount of 7 billion, Gateway would serve the consumer branch of Compaq, but director Ted Waitt refused the acquisition. In 1997, Tandem Computers was purchased for $ 3 billion, bringing Tandem CEO Roel Pieper to the management of Compaq. Just before the acquisition, Compaq was the largest US computer company and the fifth largest computer company in the world with sales of $ 18.1 billion in 1996.

Compaq sales increased by 30% in 1997 to $ 24.6 billion and realized a profit of $ 1.9 billion. Compaq was strong in PCs, but did not have a good market position in the business segment. For this, Compaq took over Digital Equipment Corporation (DEC) in 1998. Compaq paid $ 9.6 billion in money and shares for DEC. DEC had annual sales of $ 13 billion and was marginally profitable. DEC had 54,400 employees compared to 33,000 for Compaq. Compaq thus took an important step to become the largest computer manufacturer in the world.

In November 1982, Compaq announced its first product, the Compaq Portable, a portable personal computer compatible with IBM PC. It was put up for sale in March 1983 at the price of $ 2995, considerably cheaper than the Canadian Hyperion. The Compaq Portable was one of the predecessors of today's laptop. It was the second PC compatible with IBM, being able to work with all the software with which an IBM PC worked. It was a commercial success, selling 53,000 units in its first year. The Compaq portable was the first in the range of the Compaq Portable Series. Compaq was able to market an IBM legal clone because IBM mostly used parts purchased from third parties ("Commercially available Off-The-Shelf" hardware) for their PCs. In addition, Microsoft had retained the right to authorize the operating system to other computer manufacturers. The only part that had to be duplicated was the BIOS, which Compaq did legally using reverse-engineering at a cost of one million dollars. Many other companies soon followed the same path.

In 1985, Compaq released the Compaq Deskpro 286, a 16-bit desktop computer using an Intel 80286 microprocessor running at 6 MHz and with 7MB of RAM, it was considerably faster than an IBM PC. The Compaq Portable was also able to work with the IBM software. The model with 40MB of hard disk cost US $ 2000. It was the first of the Compaq Deskpro line of computers.

After reaching the brand a sales volume of 500 million dollars, in 1986 Compaq put the Compaq Portable II on sale. The Portable II was significantly lighter and smaller than its predecessor, highlighting a renewed design with an 8 MHz processor and 10MB of hard disk. It was less expensive than the IBM PC/AT with $ 3199, or $ 4799 with a hard drive. A year later in 1987, Compaq introduced the first PC based on Intel's new microprocessor to the market, the 80386, with the Compaq Portable 386 and the Compaq Portable III. IBM was not yet using this processor, and later Compaq established what is disdainfully known as the PC clone business.

In the early 1990s, Compaq entered the retail market with the Compaq Presario, and was one of the first manufacturers in the mid-1990s to sell a PC at a price below one thousand dollars. To reach this price, Compaq became one of the first manufacturers that used AMD and Cyrix CPUs. The price war resulting from the activities of Compaq in the last stay led to numerous competitors, notably IBM and Packard Bell, outside the PC market.

In 1997, Compaq bought Tandem Computers, known for its non-stop server line. This acquisition instantly gave Compaq a presence in the high quality business market. In 1998, Compaq acquired Digital Equipment Corporation, the leading company in the previous generation of computers during the 1970s and early 1980s. This acquisition made Compaq, in turn, the second largest computer manufacturer in terms of revenue.

In 2002, Compaq faced a merger with Hewlett-Packard. Numerous large shareholders of HP, including Walter Hewlett, publicly opposed the deal. Michael Capellas, then CEO of Compaq, left the company after a brief time as President of HP. Carly Fiorina became the new CEO of HP and was responsible for the merged company. Fiorina directed Compaq for about three years after Capellas left. During that time, HP laid off thousands of former Compaq employees, its share price generally declined, earnings did not rise, and continued to lose market against Dell. Faced with the possibility of being fired by a hostile board of directors, Fiorina chose to leave in February 2005. Mark Hurd took his place as HP CEO. Many Compaq products were marked with the HP brand, while the Compaq brand remained in other product lines.

Compaq itself was acquired in 2002. Hewlett-Packard offered $ 25 billion in cash and HP shares for the company. In the 12 months prior to the acquisition, Compaq achieved sales of $ 40 billion. Compaq suffered losses and the share price had fallen before the acquisition was announced by HP. Several HP shareholders, led by major shareholder Walter Hewlett, were strongly against the acquisition but this did not stop the acquisition.

HP competes against other computer manufacturers including Alienware, Dell, Lenovo, Gateway, Sony, Toshiba, Acer, Asus, and others. Originally, the company competed with IBM, making possible IBM- compatible PCs, often cheaper and faster than the IBM alternative and currently with Samsung that joins the personal computer market.

On June 1, 2014, the AMC channel premiered "Halt and Catch Fire", an American drama television series created by Christopher Cantwell and Christopher C. Rogers. The series is set in the Silicon Prairie of Texas in 1983 and is inspired by the beginnings of the Compaq Company in the era of the personal computer revolution. The series title refers to the Halt and Catch Fire machine code instruction, which causes the central processing unit of the computer to stop working.

Prior to its merger with HP, Compaq sponsored the Williams Formula 1 team, when it was still powered by BMW engines. HP inherited the agreement and continued the sponsorship for a couple of years.

"Compaq" is at the 12th Position in this list. 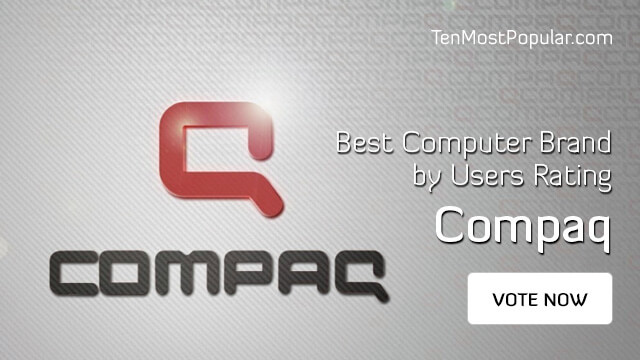