BenQ has purchased the Siemens mobile division of the German company Siemens, and will be able to use the rights to market mobile phone products for five years under the BenQ-Siemens brand.

The company has been around since 1984 but was then called Acer CM (Communications and Multimedia). The company changed its name in December 2001.

On October 1, 2005, BenQ became a player in the mobile telephony sector following the acquisition with Siemens' mobile telecom division. The BenQ mobile mobile phones were temporarily marketed under the name BenQ-Siemens. In September 2006, the Mobile division of BenQ went bankrupt.

The company was founded in April 1984 as a subsidiary of the computer manufacturer Multitech (later Acer) and was originally called Acer Peripherals. It was renamed BenQ in 2001 to emphasize the company's motto: "B ringing E njoyment a n d Q uality to Life" ("Bringing Joy and Quality to Life"). As a contract manufacturer of mobile phones and PC - Accessories active company was under the leadership of KY Lee at this time under its own brand independently.

The former Acer Company has acquired 1300 patents for storage, display, imaging and communications products. The company invests around four percent of its revenues in research and development worldwide. It is concentrated in the Hsinchu Lab in Taiwan with some 1,200 engineers, as well as two other sites in Suzhou (People's Republic of China) and San Diego (USA). It is produced in Malaysia, Mexico, China and Taiwan.

In two years, sales doubled to $4 billion and profits jumped from $100 million to $250 million. A third of which dates back to the sale of Joybook - notebooks, flat screens, video projectors, Joybee - MP3, Spielern and mobile phones. To raise awareness of the new brand in Europe, BenQ invested 18 million euros in advertising and wanted to sponsor the 2008 European Football Championship and statistics from the EM website but withdrew this commitment due to the scandal and loss of reputation for the acquisition of Siemens Mobile. In 2005, the BenQ Group's annual revenue was $16.50 billion.

Even before the introduction of the brand name BenQ, the Taiwanese opened a German branch in Hamburg in August 2000. In 2007, the team employs about 33 people. As of January 1, 2010, BenQ relocated its German headquarters to Oberhausen. The reason for this decision is the proximity to the European headquarters in Eindhoven.

According to its own announcement, the company wants to establish itself in the future as a global brand for "digital lifestyle". The goal of the company is, according to BenQ Germany boss Michael Grote, "somewhere between Sony and Samsung" to place.

The Taiwanese manufacturer Lite-On took over the DVD burner division of BenQ in mid-2006. Lite-On paid BenQ over €30 million to acquire the entire BenQ drive division, their customers and access to BenQ's drive patents. In return, BenQ received 13 percent of the shares in Lite-On and became its largest shareholder.

In 2005, BenQ took over the mobile phone division of Siemens AG and merged this with its own telecommunications division. With that, BenQ suddenly became one of the world's top six branded mobile phone manufacturers. The new division has been operating since October 1, 2005 under the name BenQ Mobile with headquarters in Munichguided. It employed some 7,000 people worldwide, making it temporarily the largest of BenQ's three newly established operations (Communications, Consumer Electronics, and Computing). According to the company, BenQ was able to sell its own mobile phones under the Siemens brand name for a year and a half from the date of its takeover on October 1, 2005, under a license agreement with Siemens AG. The name brand BenQ-Siemens could be used for 5 years, under this name, all new models introduced in 2006 were launched on the market. At the latest after this time the mobile phones should then be sold only under the brand BenQ. The question of whether BenQ can handle the acquisition of the Siemens mobile phone business financially, was considered open. Developments such as the closure of the site inUlm, the sale of the site in Aalborg (Denmark) to the competitor Motorola, the announcement of a planned reduction of about 500 employees in Germany and the yielding of market share from about 5 to 3.5 percent already showed that BenQ facing huge problems in the restructuring of the business acquired from Siemens.

On September 28, 2006, BenQ finally announced that it would stop payments to BenQ Mobile in Germany with immediate effect. "The sales and margin development for the Christmas business 2006 had remained below expectations," said a BenQ spokesman. As the share capital of BenQ Mobile GmbH & Co. OHG is only EUR 25,000, the company filed for insolvency on September 29, 2006 in the morning at the district court in Munich. OHG's 3400 employees were grouped together. The asset GmbH belonging to the mobile phone division, which bundles the intellectual values of the company, is not thereby insolvent affected. BenQ intends to continue its global BenQ-Siemens mobile phone business by leveraging existing R&D and manufacturing capabilities in Asia.

According to statements by a spokesman for the Siemens Group, the 3,000 BenQ employees were given preferential treatment in favor of external candidates until 2009 when looking for jobs in the Siemens Group. In addition, a relief fund has been set up to provide financial support to employees. BenQ and the Siemens group are under criticism for the threat of job losses at the former Siemens plants. For the 3,300 dismissed employees from the spring of 2008, public funds amounting to 12.8 million euros from the European Globalization Fund for retraining and reintegration will be provided.

December 31, 2006 presented BenQ Mobile, the production one. On February 24, 2007 it was announced that the last interested party has jumped and the company will be smashed.

The share price of BenQ increased significantly in the short term immediately after the announcement of the German insolvency, but subsequently fell sharply again.

In Germany, there was a significant drop in sales of all BenQ product lines (not just mobile phones). In addition, BenQ is struggling with a rapid loss of image in Europe, which favors, if not causes, this slump in sales. According to BenQ Mobile's liquidator, only the Russian market was reasonably stable during the 2006/2007 Christmas season.

In March 2007, BenQ marketing Chief Jerry Wang announced a series of new devices from the simpler mobile phone to the smartphone and UMPC for the Taiwan EETimes 2007. Likewise, BenQ announced that it wants to be one of the main sponsors of the European Football Championship 2008 in Austria and Switzerland, in order to improve its image in Europe again, which in Germany in view of the recent bankruptcy of BenQ Mobile to fierce criticism Trade unions and the media came across. In the summer of 2007, it finally became known that BenQ renounced its commitment as sponsor of the European Football Championship 2008.

In late March 2007, it was also announced that BenQ chief financial officer Eric Yu on suspicion of insider trading was remanded in Taiwan. The local financial regulator wanted to clarify the suspicion that members of the BenQ management had made larger stock sales even before the public announcement of larger quarterly losses in October 2006 (at the time of provisional insolvency of BenQ mobile) and already in March 2006. Other top managers of the company were initially released after paying a deposit. Against the chairman of the board KY Lee is not determined according to statement of the public prosecutor's office at present. However, after the arrests, the company's share price temporarily fell to its lowest level since the company was founded.

At the same time it became known that BenQ had diverted a sum of 504 million euros from BenQ Mobile, shortly before the subsidiary had to file for bankruptcy. OHG The approximately 4,350 creditors, claims, amounting to almost 1.2 billion euros against the insolvent BenQ Mobile GmbH, then planned a million lawsuit against the parent company BenQ in Taiwan. As a result, observers and media reiterated allegations that BenQ had never been interested in rescuing the Siemens mobile phone division and deliberately bankrupted the subsidiary.

The following companies belong to the BenQ Group:

BenQ's product range includes monitors, video projectors, large format displays, PC accessories such as computer mice, keyboards and speakers, image processing systems, as well as solutions for mobile communications and broadband technology. In the combination of such components for both professional and private use, BenQ believes that the future will be in consumer electronics.

"BenQ" is at the 16th Position in this list. 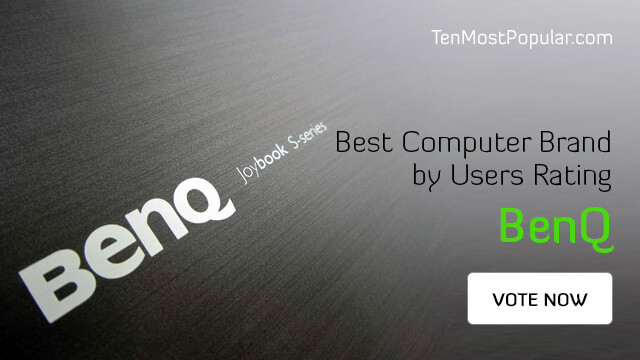