Asus (also known as ASUSTeK or ASUSTeK Computer) is a producer of computers (laptops and desktops), smartphones and components for computers.

The company makes a wide range of motherboards for different processor manufacturers, but especially for Intel and AMD. In addition, Asus also manufactures video cards (usually with NVIDIA and AMD chips), barebone PCs, network products and so on.

The company was founded in 1989 in Taiwan by TH Tung, Ted Hsu, Wayne Hsieh and MT Lia. The headquarters are located in Taipei, most factories are also located in Taiwan, except for one in China. Asus now also has many branches in Europe, including Germany, Netherlands, Czech Republic and France.

In 2014 Asus collaborated with PT Dragon Computer & communication to become the main distributor of notebooks and tablets in Indonesia and managed to become the number one brand to date (according to IDC and GFK data).

In 1989, Asus began production of motherboards which Pentium two processors fit. In 1996 they started with servers that became ASUSPRO. The production of laptops began in 1997, one of which was allowed to go to the Mir space station in 1998, it worked there without ever falling out once. In 1999, Asus was the first with a CD-ROM drive that could handle speeds of 40x and 50x. In 2000, one of their modems was honored with honor for CableLabs. More than 420 million motherboards have been sold since 1989.

After success with the presence of Asus Transformer tablet products for the upper middle class, in 2013, Asus introduced the Asus MeMO Pad in 7 inch and 10 inch sizes that were more affordable. The Asus MeMO Pad feature that is pretty cool is the Floating App which allows several applications to run simultaneously and all appear on the screen without having to take turns. That is, you can watch videos while browsing, or while editing office files provided at ASUS WebStorage Online Office.

"Asus" is at the 1st Position in this list. 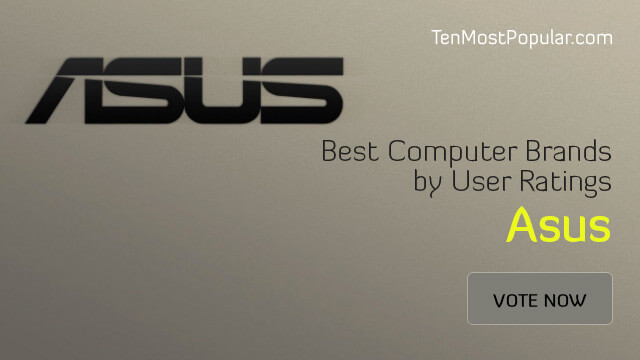