Multitech, a company that was founded in 1976 by Stan Shih, changed its name, renamed Acer in 1981. The Acer group employs 39,000 people, including distributors and service personnel, in about 100 countries. Revenues reached in the US 12.9 billion $ in 2002. The company headquarters is in the city of Hsichih, County Taipei, Taiwan.

Acer's subsidiary in Australia is Acer Computer Australia, which in addition to being number 3 in the total desktop and laptop market, is the leading seller in key segments such as government and education.

The market share of American of Acer has declined in recent years, while the share Europe has been increasing. Acer is trying to re-enter the North American market but it is not yet known if it will work. Much of its success in Europe can be attributed to its sponsorship of the Ferrari Formula 1 Team and previously Prost Grand Prix. It is rumored that Acer will soon sponsor the American based Champ Car World Series.

At the beginning of the 90s, Acer enjoyed a large market share in Latin America, in tough competition with Compaq. However, Compaq managed to capture most of the market, which meant the closure of the Acer assembly plant in Colombia, the reduction of its Brazil plant and which could only preserve the Brazilian and Mexican markets. Acer is currently reintroducing itself in several Latin American markets.

In August 2007, Acer acquired the US computer manufacturer Gateway, Inc., for which it paid $ 710 million. With this Acer gets above the Chinese manufacturer Lenovo and takes third place worldwide.

In September 2007 Acer/Gateway declares its interest in buying Packard Bell. Interest is confirmed in January 2008 when Acer announces that it acquires control of Packard Bell by buying 75% of the company.

At the end of 2009, Acer outpaced Dell, and at that time it became the second largest manufacturer of personal computers worldwide only surpassed by Lenovo.

In the second quarter of 2010, Acer sales decreased by 6.2% compared to the previous quarter. This prompted Dell to take second place in worldwide sales again.

In 2011, a week after a major change in the Acer management team, the new graphic image that will identify the company was revealed. This new logo replaced the previous version that was used throughout the 2000s. According to Acer, the new logo has a cleaner and softer typography, with a light green replacing the previous dark green.

Acer was founded in 1976 by Stan Shih. He is still involved with the company and is the largest shareholder at year-end 2014 with a stake of 2.6%. In 1997, the entire Texas Instruments computer division was taken over by Acer. The Pan Acer Group employs 39,000 people and has its own seats in more than 140 countries. The international headquarters are in Sijhih City, New Taipei, Taiwan.

In October 2007, Acer acquired the American Gateway and Packard Bell. Together, Acer and Gateway sold no less than 18.6 million computers in 2006 and Acer became the third largest computer company in the world. AOpen is a subsidiary of Acer that makes OEM PC components and various individual PC components. Apacer is Acer's memory chip company, which is the market leader in OEM memory chips (flash memory).

Acer's North American market share has fallen slightly in recent years, particularly due to the focus on its own American brand Gateway, while the European market share ACER has risen sharply. Acer's subsidiary in Australia is Acer Computer Australia. It is the number 2 in the total PC desktop and notebook market and also the leading seller in important segments such as governments and education.

Much of Acer's reputation in Europe is due, among other things, to sponsoring and supplying the computer equipment for the Winter Olympics in Vancouver 2010 and in London in 2012. In addition, Acer is the sponsor of the Formula 1 team Scuderia Ferrari and the former Prost team Grand Prix. Due to the close cooperation with Ferrari, the world-famous designer Pininfarina also designs various premium products for Acer in terms of styling, design and ergonomics. In order to continue to grow, Acer wants to achieve more brand value. For this, the company is anti-cyclical against market development, and has stopped outsourcing of its service and help desk centers and has taken this into their own hands again. With this Acer not only wants to be distinctive on quality but also on after sales.

Acer has been involved with motor sport, their involvement as an engine of the team Prost Grand Prix of Formula 1 in 2001 (actually made by Scuderia Ferrari) or launching series computers "Ferrari".

"Acer Inc." is at the 3rd Position in this list. 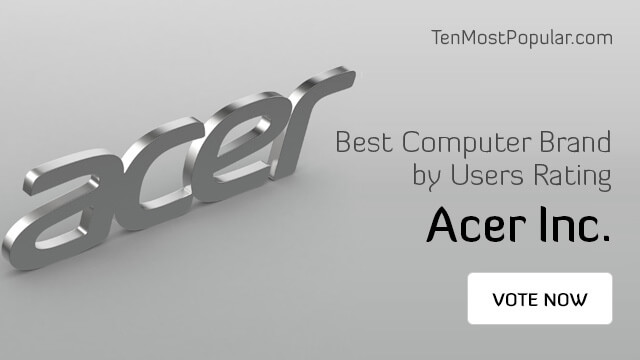