It is one of the best known examples of Catalan modernism and an emblematic monument of the city. The unfinished work of architect Antoni Gaudi, the Sagrada Família is located in the district of the same name (district of Eixample). The architect has designed a meticulous symbology that makes this building a mystical poem. He has also shown great daring formal construction, such as how to design the structure of arc catenary or the combination of naturalistic sculptural treatment and abstraction towers. According to 2004 data, the Sagrada Família is Spain's most visited monument, surpassing the Alhambra of Granada and the Prado Museum in Madrid. In 2012, it attracted more than 3.2 million visitors. The part of the monument made during the lifetime of Antoni Gaudí, the crypt and the façade of the Nativity, was declared World Heritage Site by UNESCO in 2005.

Since it is an expiatory temple, the works are financed exclusively through alms. As a result, it was not possible to simultaneously build the different parts of the monument when it was necessary, but since the 1990s, the influx of visitors and the worldwide renown of the work have changed the situation. The basilica was consecrated by Pope Benedict XVI on November 7, 2010. The seat of the archdiocese of Barcelona, however, remains the Cathedral St. Eulalia, building built in medieval times and located in the heart of the Gothic Quarter.

December 31, 1881, Josep Maria Bocabella, commissioned by the "association of devotees of St. Joseph", acquires with money collected by alms the block of houses between the streets Mallorca, Marina, Provença, and Sardenya for 172000 pesetas. The goal is to build a church dedicated to the Holy Family (Saint Joseph, the Virgin Mary and Jesus). In addition to the church, the project provides for the construction of schools. The first named architect is Francisco de Paula del Villar y Lozano. He developed a neo-gothic church project including a nave of three vessels closed by an ambulatory choir. The day of St. Joseph, 1882, Bishop Jose Maria Urquinaona there Vidot in laying the foundation stone in accordance with the proclamation of the Council Vatican makes St. Joseph the patron of the universal Church.

The idea of Bocabella is to make the building a replica of the Loreto shrine that is supposed to be the home of Joseph and Mary in Nazareth. Francisco de Paula del Villar refuses this approach. Disagreements multiply between him, Bocabella and his assessor, the architect Joan Martorell i Montells. The latter recommends in 1883 his former apprentice Gaudí, carrying a more ambitious project.

The project presented by Gaudí, is a total change compared to that of Villar. It provides for the construction of a temple of architecture derived from his personal imagination, a naturalist - modernist trend, consisting of five naves, a cross, an apse, an outer ambulatory, three facades and eighteen towers, twelve of which symbolize the apostles, four for the Evangelists (135 meters high), one for the Virgin Mary (127.50 meters surmounted by the Morning Star) and the highest 172.5 meters 9in the center to symbolize Jesus Christ. This new project significantly increases the size of the church. Mystic-religious references are of great importance in Gaudí's work, both strictly from the point of view of iconography and from the symbolic point of view of basigoda. He wanted the temple to reflect the history and mysteries of the Christian faith. Thus, the three facades represent three stages of the life of Christ, the Nativity, the Passion and the Glory. The cross refers to the heavenly Jerusalem symbolizing peace.

Gaudí wanted to make this church the tallest building in Barcelona. To support the load, he introduced new means, such as the chain bow and the hyperboloid vaults. The length is 120 m and the width is 45 m. The total area will be 4,500 square meters for a capacity of 14,000 people. The proportions are calculated from a quadrilateral of 7.5 m by 7.5 m. All measurements are multiples of this quadrilateral.

The new architect will dedicate the rest of his life to this work, accepted with great enthusiasm by the promoter. He devoted his last fifteen years exclusively to the realization of the Sagrada Família.

In December 1884, Gaudí signed the project in the Chapel of St. Joseph, in the apse of the crypt, in the presence of his disciples Llorenç Matamala i Piñol and Carles Mani. The crypt was inaugurated on March 19, 1885. That year a team including eight laborers, masons ten, twelve sculptors and an unknown number of carpenters and locksmiths worked in construction.

In 1891 the work of the Nativity facade began.

When installed on the façade of the Passion, the sculptures of Subirachs trigger controversy because of their strong stylistic contrast with the naturalist-realistic statues of the Nativity façade. Some say that the style of Gaudí's only façade must be respected, while others argue that the two facades have opposite symbols: birth and death.

The Sagrada Família has since 1961 a space used as a museum. It is located in the subway of the temple, under the cross of the transept, where were previously the workshops of the building. The museum was expanded by reusing the space freed by the schools of the Sagrada Família after their displacement in 2002 near the intersection of Sardenya and Mallorca streets near the façade of the Passion.

The museum displays models, plans, old and original drawings, photographs of the evolution of the works, as well as tools for preparatory studies designed by Gaudí, including the cords weighted with small bags used for the crypt of the Colony Güell. Finally, there are models of the sculptures of Josep Maria Subirachs i Sitjar's Passion façade.

The visitor can also watch a film showing the various relations of the temple with its environment and retracing the evolution of the works over time.

Construction of the high-speed line

The Ministry of Spatial Planning of the Spanish Government has planned the construction of a tunnel by the Mallorca Street, just under the area on which will rise the main facade of the building. This tunnel will serve the new line Barcelona - France. Although the ministry assures that the project poses no risk to the structure of the temple, academic experts from different disciplines, the Patronate of the Sagrada Familia, the Collective for a good route of the TGV and the platform of residents AVE pel litoral oppose the project.

Mistrust of the project developed after the collapse of Carmel during the construction of a metro line.

However, recent studies of Catalonia College of Geologists conclude that the works presented for the temple a very limited risk.

The Sagrada Família has been listed in Spain as a property of cultural interest since July 24, 1969.

"Sagrada Família" is at the 1st Position in this list.

List of Most Weird Building Structure in the World 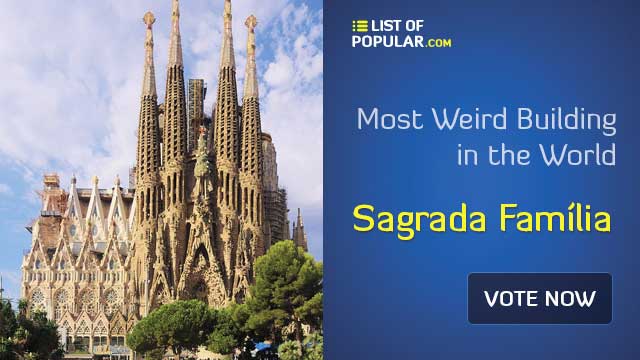