FacebookTwitterWhatsAppEmail
Ursula Ucicky decided to privatize Gustav Klimt's masterpiece "Wasserschlangen II", which had once belonged to Jenny Steiner. Sotheby's sold the picture for $ 120 million net. Her remaining Klimt images brought Ucicky into a private foundation Vienna - Rudolf Leopold, the great collector who died in June 2010, missed a picture, a very decisive picture. It is called Wasserschlangen II, Gustav Klimt painted it between 1904 and 1907.

For Leopold, the masterpiece was as significant as the Golden Adele, which Ronald Lauder acquired in 2006 for the world record price of 135 million dollars. But the image that hung in a Viennese apartment was hard to come by the owner, a very old lady, refused any contact, nor did she open the door. Had Ursula Ucicky of Leopold let herself be flogged. The picture would probably be in the Museum Leopold today. But it turned out differently. The water snakes II were sold through Sotheby's in London on a private sale for allegedly $120 million net, and are no longer in Austria. Nothing can be learned about the buyer. At first, it seems strange that the Federal Monuments Office issued an export license.

But there was a "reason worthy of consideration": The Wasserschlangen II is a stolen art and Ursula Ucicky decided to a private institution. The picture was acquired by the manufacturer Jenny Steiner in 1911 from Klimt. In 1938, after the Anschluss, it was seized. On March 5, 1940, it was to be auctioned at the Dorotheum, but Reich Governor Baldur von Schirach had the Water Serpents II taken from the auction. The painting came into the possession of the film director Gustav Ucicky. The story of detoxification can be read in Sophie Lillie's book The Expropriated Art Collections of Vienna titled Was once Was (Czernin Verlag) by the way, the water snakes II act as cover illustration. Ucicky, born in 1899 in Vienna, was the son of Maria Ucicka, who worked as a temporary help in the household Klimt and also as his model.

There is no official confirmation for Klimt's paternity claimed by Ucicky. Ucicky made Cafe Elektric among others and in 1941, during the Nazi era, the propaganda film Homecoming with Paula Wessely in the lead role. He died in 1961 in Hamburg, he left his wife Ursula a respectable art collection. Recently, an agreement was reached with the heirs after Jenny Steiner. It is not known how the proceeds were distributed. For the widow Ucicky, who comes from a Jewish family, the solution is a relief. In addition, she brought her other Klimts, four paintings and ten drawings, estate of Gustav Ucicky and one million euros in a private foundation, which was recently founded.

"Wasserschlangen II" is at the 2nd Position in this list. 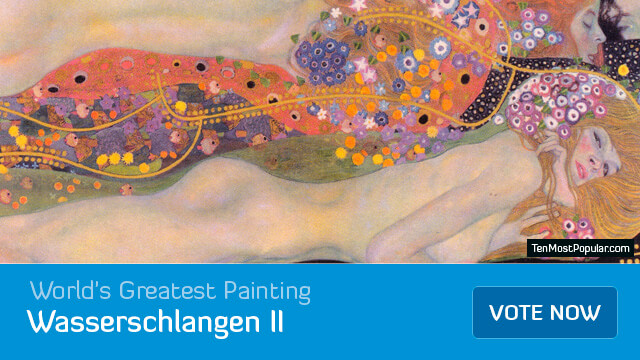