FacebookTwitterWhatsAppEmail
Sleeping Venus is an oil painting on canvas painted about 1507 to 1510 by Giorgione, master Italian of the Renaissance and it is currently in Pinacotheca Old Masters in Dresden. The work was completed and partly repainted by Titian, in 1511 - 1512, after the death of Giorgione.

Inspired by ancient treasures, or representations of Ariadne or Hermaphrodite, or in some figure this one of the illustrations Hypnerotomachia Poliphili of 1499, the Venus asleep Giorgione has given rise, in turn, to a true gender because it was taken up by many others artists, Venetians and otherwise.

The composition of this work had a wide resonance from the beginning in Venice, where it was taken up by Titian (with the also well-known Venus of Urbino), Lorenzo Lotto (Venus and Cupido), Dosso Dossi (Pan and the nymph), Domenico Campagnola and Palma il Vecchio (Nymph in a landscape). He later inspired generations of artists, such as Rubens, Ingres, and Édouard Manet (Olympia).

"Sleeping Venus (Giorgione)" is at the 40th Position in this list. 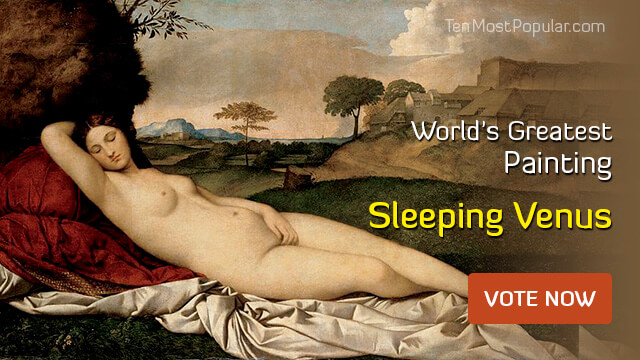