Portrait of Adele Bloch-Bauer I

FacebookTwitterWhatsAppEmail
The Portrait of Adele Bloch-Bauer I is a painting by Gustav Klimt (1907), which was purchased for $135 million, in June 18, 2006, at a private sale, by billionaire Ronald Lauder, after being returned to the Bloch-Bauer family by the Belvedere Museum in Vienna. The work is now on display at the Neue Galerie in New York.

Klimt took three years to complete this painting. Forming a square 138 cm square, it is painted on a canvas with oil paint, as well as gold and silver, which showcase the refined and complex ornament as found in German Art Nouveau, the Jugendstil. Klimt was a member of the Viennese Secession, a group of artists who broke with traditional painting.

Inspired by the mosaics of the Basilica of San Vitale in Ravenna, particularly the one representing the Empress Theodora (6th century), Klimt created the portrait of Adele Bloch-Bauer a monument to the glory of feminine beauty. The abundant use of gold at the expense of color and this intimate relationship to history create a unique aura that distinguishes the Viennese Jugendstil from other versions of Art Nouveau throughout Europe. At the same time, the delicacy of the details of Adèle Bloch-Bauer's face prevents the subject from disappearing in the anonymity induced by the universal scope of the painting.

The painting was painted in Vienna and commissioned by Ferdinand Bloch-Bauer, a wealthy industrialist who having made his fortune in the sugar industry, became a patron of many artists including Gustav Klimt, whom he supported. Adele Bloch-Bauer is the only model that Klimt has painted twice since there is a second painting representing her, Adele Bloch- Bauer II, made in 1912.

"Portrait of Adele Bloch-Bauer I" is at the 26th Position in this list. 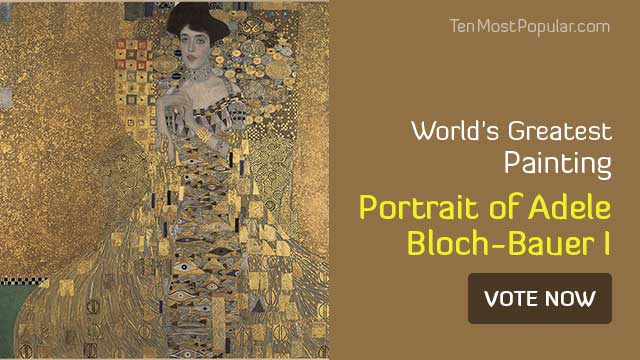 Total Votes: 60
Votes received:1
Up votes:1
Down votes:0
2% Popularity
100% Up votes
0% Down votes
Go to voting page
Comments on Portrait of Adele Bloch-Bauer I
Submit
Cancel