FacebookTwitterWhatsAppEmail
Nu couché (The Reclining Nude) is a painting by Amedeo Modigliani from 1917.

The painting shows an unclothed woman lying in an interior on a dark red sofa and turquoise pillow in the tradition of Titian's Venus of Urbino. It was painted in 1917 in oil on canvas 92 inches wide and 60 inches high. The face of the long stretched-out young woman with her almond-shaped eyes, bared breasts and shame is directly facing the viewer. Her eyes are closed. The Lying Act was 1917 in the Paris gallery by Berthe Weillshown together with other nude representations. It came to a crowd at the exhibition, probably the image then scandalous on the gallery visitors. The police ordered the same day the removal of the nude representation along with other other files. Of the artist who died at the age of 35, there are about 420 paintings.

On November 9, 2015, the image was sold to Christie's in New York City for $170.4 million to industrialist and art collector Liu Yiqian.

"Nu couché" is at the 4th Position in this list. 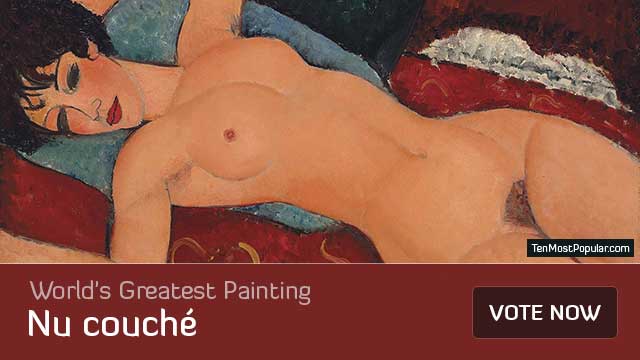