Nafea Faa Ipoipo (When Will You Marry?)

FacebookTwitterWhatsAppEmail
When Will You Marry? is an oil painting in 1892 by French Post-Impressionist artist Paul Gauguin. Loaned to the Kunstmuseum in Basel, Switzerland for almost half a century, this painting was sold privately by the Rudolf Staechelin familyto an unknown buyer, reportedly the Qatar Museums, in February 2015 for almost $ 210 millions, one the highest price ever paid for a work of art. This painting was exhibited in the Beyeler Foundation, Riehen, until June 28, 2015.

Two central figures absorb attention sitting on the floor on a simplified background with bright, flat colors. They are two Tahitian women located in different planes. The first one dressed in a traditional-colored sarong and a white blouse, and behind her sits a woman dressed in a closed pink missionary-style outfit. The gesture of his raised hand asks for attention.

"Nafea Faa Ipoipo (When Will You Marry?)" is at the 21st Position in this list. 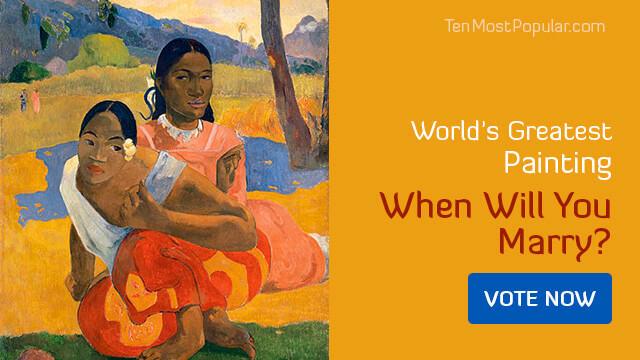 Total Votes: 57
Votes received:1
Up votes:1
Down votes:0
2.04% Popularity
100% Up votes
0% Down votes
Go to voting page
Comments on Nafea Faa Ipoipo (When Will You Marry?)
Submit
Cancel