FacebookTwitterWhatsAppEmail
Mona Lisa is an oil painting on poplar wood made by Leonardo da Vinci in the 16th century. This painting is often regarded as one of the most famous painting in the world and only a few other works of art are the center of attention, study, mythology and parody. This painting is owned by the French government and exhibited at the Musée du Louvre in Paris. This half body painting depicts a painting of a woman whose gaze leads to visitors with expressions that are often described as enigmatic or mysterious.

The name or title of the Mona Lisa painting comes from Giorgio Vasari's biography of Leonardo da Vinci, which was published 31 years after he died. In this book it is stated that the woman in this painting is Lisa Gherardini. Mona in Italian is an abbreviation for ma donna which means "my lady". So the title of the painting means Mrs. Lisa. In Italian, the painting title is usually written as Monna Lisa.

Then La Gioconda is the feminine form of Giocondo. The word giocondo in Italian means "cheerful" and la gioconda means "cheerful woman". Thanks to this mysterious Mona Lisa smile, this phrase has a double meaning. Similarly, the translation is in French- La Joconde.

The name Mona Lisa and La Gioconda or La Joconde became the title of this painting which was widely accepted since the 19th century. Previously this painting was called by various names such as "Woman of Florence" or "A noble woman with a thin veil".

"Mona Lisa" is at the 3rd Position in this list. 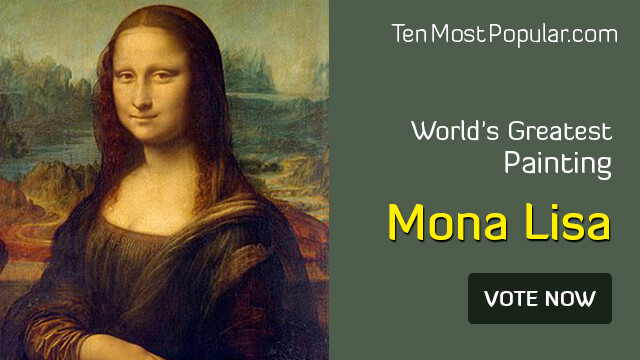