FacebookTwitterWhatsAppEmail
Les Femmes d'Alger (The Women of Algiers) is a series of 15 paintings and numerous drawings by the Spanish artist Pablo Picasso from the period late 1954 / early 1955. The series with versions A to O was inspired by Eugène Delacroix's Painting The women of Algiers in their chamber from 1834 and was also a tribute to the died in 1954, by Picasso cherished painter Henri Matisse.

The entire series of Les Femmes d'Alger was bought by Victor and Sally Ganz from the gallery Louise Leiris (a gallery by Daniel Henry Kahnweiler) in Paris for $212,500 in June 1956. Ten paintings from the series were later sold to the Saidenberg Gallery. The couple Ganz kept the versions C, H, K, M and O. Version C was sold in 1988 after the death of Victor Ganz, the remaining versions were auctioned individually in 1997 at Christie's, New York. Many of the individual images in the series are currently represented in important public and private collections.

The latest version of Les femmes d'Alger (version "O") was auctioned again in May 2015 in New York for about $179 million (including commission) at Christie's. A new record price for paintings was achieved, which was set in November 2017 by the auction of the painting Salvator mundi by Leonardo da Vinci.

The version "O" depicts a scene from a harem and shows four bare-headed women, painted in bright colors in a mixture of abstract and realistic. It was created as a tribute by Picasso to his deceased in November 1954 colleague Henri Matisse, who had used Odalisque as motifs. In 1997, the picture was auctioned at Christie's for $32 million. At the same time, the picture became the most expensive ever auctioned Picasso. It broke the 2010 record of $ 106.5 million for its act with green leaves and bust. 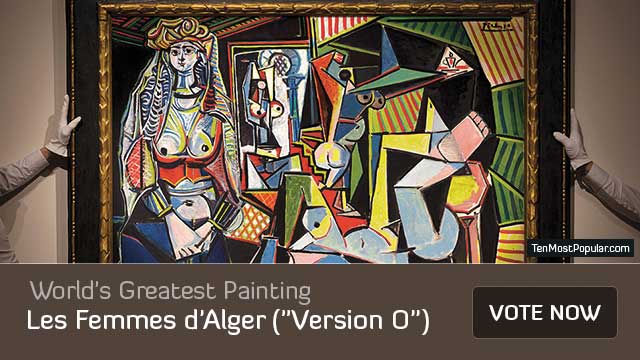